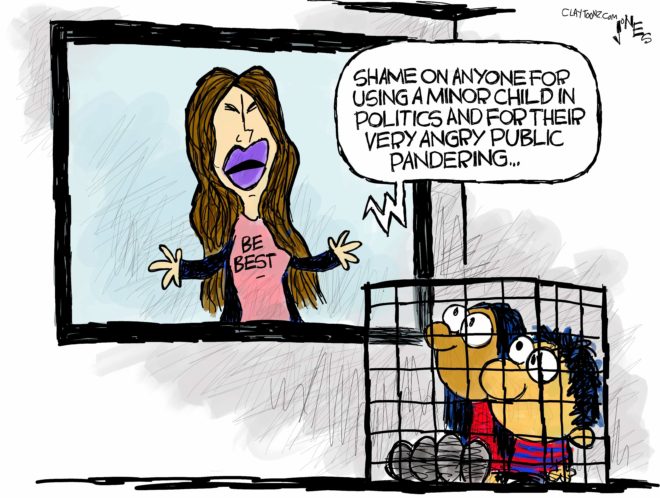 The party that gave us baby jails is outraged that a liberal college professor would inject Trump’s youngest child, Barron, into politics and make jokes at his expense. Except the college professor didn’t do that.

Constitutional law expert Pamela Karlan was testifying before the House Judiciary Committee to give her opinions on impeachment. While answering a question from Democratic representative Sheila Jackson Lee, she invoked Barron’s name to make a point. Not one single Republican seemed to get the point.

Lee asked Karlan about the comparison “between kings that the Framers were afraid of and the president’s conduct today.” Karlan answered, “Contrary to what President Trump says, Article Two does not give him the power to do anything he wants. The Constitution says there can be no titles of nobility, so while the president can name his son Barron, he cannot make him a baron.” How dare she point out that Donald Trump has a son named Barron.

Representative Matt Gaetz, whose inclusion on the committee proves Republicans don’t take it seriously, was indignant. Gaetz is the kind of guy who thinks he’s made a strong point after making an ass out of himself. Earlier this week, he was indignant that the Republican governor of Georgia would appoint someone to the Senate that Trump didn’t endorse. Gaetz, who is from Florida, tweeted, “You are ignoring his request because you THINK you know better than @POTUS.” How dare someone think they know better than Donald Trump, especially concerning their own state. But Gaetz’s best outrage of the week was for Professor Karlan.

He screamed at her, “Let me also suggest that when you invoke the president’s son’s name here. When you try to make a little joke out of referencing Trump, that does not lend credibility to your argument. It makes you look mean. It makes you look like you’re attacking someone’s family. The minor child of the president of the United States.” Her sin was stating Trump has a son named Barron.

Here’s the funny thing about this phony outrage over someone saying Trump’s son’s name: Republicans are hypocrites.

Where’s Gaetz’s outrage over ripping children from their families at the border? It’s non-existent. For that matter, where’s Melania’s outrage?

Melania, or someone with her Twitter password, tweeted, “A minor child deserves privacy and should be kept out of politics. Pamela Karlan, you should be ashamed of your very angry and obviously biased public pandering, and using a child to do it.” The fun part of this is that Melania just used her son to go after her husband’s political foes. Republicans are always guilty of what they accuse others.

But where’s Melania’s outrage over family separation, or Trump boasting about barging into the dressing rooms of teenage beauty pageant contestants, or when he tweeted an attack at 16-year-old climate activist Greta Thunberg?

White House Press Secretary Stephanie Grisham got in on the act and tweeted, “Classless move by a Democratic ‘witness’. Prof Karlan uses a teenage boy who has nothing to do with this joke of a hearing (and deserves privacy) as a punchline. And what’s worse, it’s met by laughter in the hearing room. What is being done to this country is no laughing matter.” Keep in mind, that these people who don’t understand the joke are constantly explaining to us when Trump is joking.

Charlie Kirk, a friend to Trumpy Jr., tweeted, “The left has complained for 2 months it is unethical to attack 49 year old Hunter Biden yet they now shamelessly attack 13 year old Barron Trump. This is the left, they don’t care about people, children, or America, only destroying Trump.” Just a couple months ago, Kirk accused Thunberg (remember, she’s only 16) of supporting “domestic terrorism.”

Fox News’ Laura Ingraham (this is getting too good) tweeted, “Karlan’s cheap shot invoking Baron Trump’s name just lost them any shred of hope that they’re going to win this impeachment battle in the court of public opinion.” Ingraham was outraged, but not enough to bother learning how to spell Barron’s name. Let me remind you, Ingraham taunted David Hogg, who many Republicans accused of being a “crisis actor,” over his college rejections.

Other Republicans pounced. Pence pounced. The Trump campaign pounced. One Republican congressman even entered Melania’s tweet into the Congressional Record.

Immigrant children, survivors of school shootings, and teenage climate activists are all fair game for attacks from Republicans. The rule is, don’t even say the name of a Republican’s child.

A cartooning colleague of mine, who is a level-headed guy, said Karlan messed up because she fed the GOP, Trump cult, and Fox News hosts’ fake outrage for the next six months. But I have an issue with that. Why should we change the rules because Republicans are idiots and liars? Apparently, we did change the rules because Karlan apologized before the hearing was over, which of course no Republican bothered to acknowledge, just like Trump isn’t a king, can’t make Barron a baron, or that “Barron” is the name Trump used to use when he’d call reporters pretending to be someone else to talk about himself.

Melania’s campaign as First Lady is titled “Be Best,” which is an anti-bullying campaign. This is why it’s hard to create satire on this administration. The thing Republicans are best at is pretending to be victimized.