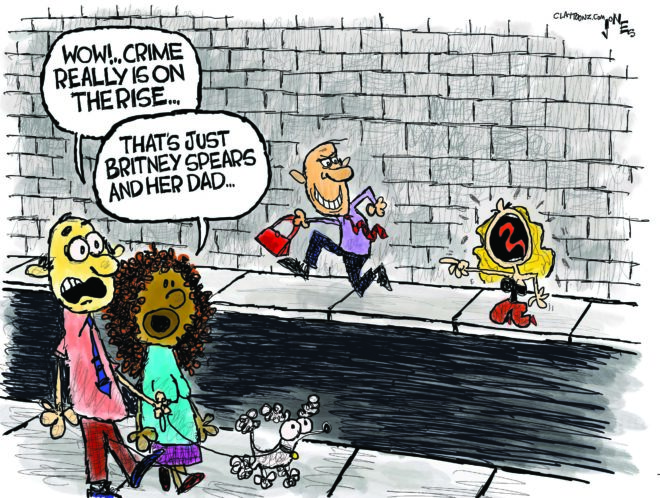 Britney Spears and her father have issues, and guess what. I’m on Britney’s side.

Spears is in a conservatorship where her father controls her life. He controls everything from who she’s friends with, who she dates, to the color of her kitchen. Spears is probably worth around $60 million and she’s on a $2,000 a week allowance.

You may think $2,000 a week is nice. I’m sure it is, but the entire $60 million is hers. What does her father get for controlling her life? He’s not just doing it out of love for his daughter. He is paid $16,000 a month, which is more than Britney gets. He also gets $2,000 for office expenses in Kentwood, Louisiana. Additionally, he gets a percentage of her tours, albums, and merchandising.

Yesterday, Britney went to court in Los Angeles and pleaded with the judge to end the conservatorship and allow her to control her own life. In her plea, she claimed she’s been forced to be on birth control for the past 13 years. She also claimed she’s been drugged and forced at times to work against her will.

Her father gained control over her life in 2008 when he petitioned the court to give him control after there were concerns over her mental health and possible substance abuse. Since then, he has controlled Britney to the point that she didn’t even know she could petition to end the conservatorship until 2014. She has a court-appointed lawyer. Why didn’t he make her aware of this sooner?

After she spoke out about the choreography for a planned Las Vegas residency, and objecting over certain dance moves, the conservatorship objected, and forced her into involuntary medical evaluations and rehab…because she spoke up for herself…over dance moves.

Britney made the point in court that she can “make a living for so many people and pay so many people,” while not having control over the money she’s earning. Conservatorships are usually last resorts for people who cannot care for themselves, including those with serious disabilities or dementia. If Britney is one of those, then how can she perform on a level that financially supports so many people?

Britney said she knows she still needs therapy, but she’d like the freedom to get married and have another child, visit friends, and even choose the color of her fingernails.

Britney will probably make mistakes in the future. She may blow her money on some stupid shit. But, she’s an adult. She’s almost 40 years old. Michael Jackson wasn’t in a conservatorship and he was marrying Lisa Marie Presley, buying monkeys, and saving his urine in a jar. Nicolas Cage keeps spending millions of dollars on mansions, castles, cars, islands, dinosaur skulls, and comic books. He’s been married five times, with one of those also being to Lisa Marie Presley. Why isn’t Lisa Marie Presley, who’s been married four times, in a conservatorship? Who’s she gonna marry next? Gary Busey?

Anyone wanting to get married a second time should probably go under mental evaluations, but I digress.

Free Britney. Also, if anyone has the number for Lisa Marie Presley…