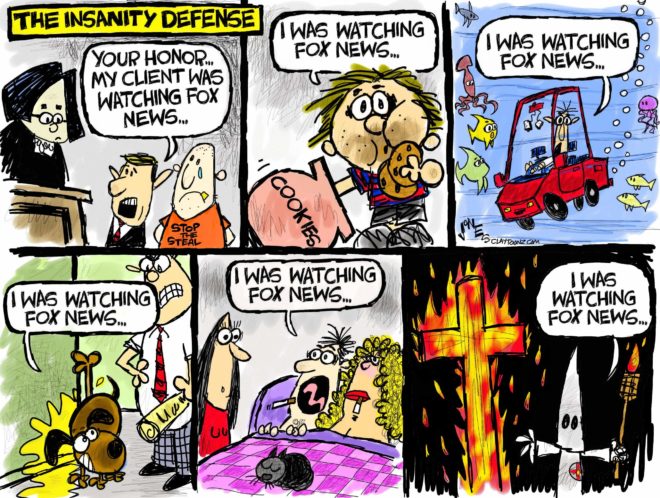 The white nationalist Trump terrorists who attacked our nation’s Capitol building to violate a democratically-held election and to re-install Donald Trump through a bloody coup attempt have all turned out to be sissified cry babies abdicating their own responsibility.

Donald Trump was responsible for the white nationalist terrorist attack on the Capitol. He’s responsible for the six deaths and injuries to over 100 Capitol Police officers. He spread lies for weeks that he won the election and it was stolen from him. He told his MAGA goons to be there on January 6. They were there on January 6. Before the attack, he told them to march to the Capitol and overturn the election. But he shares blame.

The people who attacked the capitol, Nazis, Proud Boys, One Percenters, Oath Keepers, Klansmen, and Fox News viewers were adults. Even the guy who brought his mommy with zip ties is an adult. They are responsible for their actions. Al Qaida and ISIS are a bunch of terrorizing, Jihad-seeking mother fuckers pledging death to America, but you don’t see those guys crying that bin Laden made them do it. The Qanon Shaman had his mommy go to court to plead with a judge that her son can’t eat jail food. That’s some serious white privilege.

Several of the attackers have since changed their minds and are now blaming Donald Trump, as if they couldn’t think for themselves. Did it take jail to detox from the MAGA cult?

But they’re not just blaming Donald Trump. They’re blaming Fox News. These terrorists are responsible for their own actions, but Fox News shares blame. They aired Donald Trump’s bullshit. They pounded it into their viewers’ brains. Trump’s minions who went on cable news to advance the Big Lie bullshit didn’t go on CNN or MSNBC. They went to Fox News, OANN, and Newsmax.

So far, 440 people have been arrested in connection to the MAGA riot. One guy’s defense is that he was suffering from an illness his lawyer calls “Foxitus” and “Foxmania.” The attorney for defendant Anthony Antonio (so stupid, he has the same name twice) said he had “Foxitus” from watching six months of Fox News nonstop, and started “believing what was being fed to him by Fox News and Donald Trump.”

This defendant’s lawyer isn’t the only one arguing you shouldn’t believe Fox News. Fox News’ own lawyers made the same argument in a previous lawsuit. It was specifically about Tucker Carlson’s show, “Assholes Tonight.” And it might work. If you tell me you don’t watch anything except Fox News, I’ll buy the argument you’re a moron.

At least 440 people have been arrested in connection with the terrorist attack. There needs to be at least one more.

Inside that very same building Donald Trump’s terrorists attacked are Republicans who are still worshipping the terrorist leader who ordered the attack.

The rich sweet irony here is that MAGA goons love to accuse liberals of being sheep, yet here they are claiming they’re not supposed to be held responsible because they’re incapable of thinking for themselves. But they are responsible and like Donald Trump, Fox News, and every representative who enabled the white nationalist terrorist attack (like Ted Cruz, Josh Hawley Ron Johnson, et al.), they’re all a national security threat.

These people who can’t think for themselves shouldn’t be allowed to choose their own TV shows. Turn off Fox News before you hurt someone…or hurt yourself. Is Hee-Haw still on?