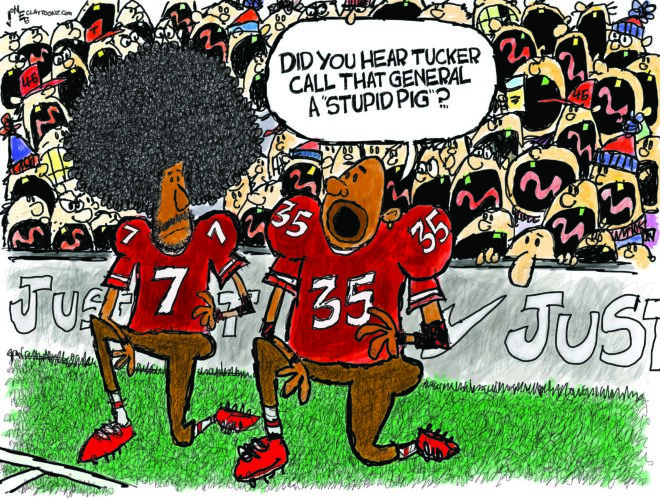 I lied. His experience with Swiss boarding schools isn’t vast. He was kicked out. Apparently, he was too white. I hope that didn’t enrage him.

Tucker has attended at least two private schools and and one private college where he was a member of the Dan White Society, named after the (white) guy who assassinated San Francisco supervisor Harvey Milk and mayor George Moscone. Tucker is not a veteran of the military. No, Tucker is a trust-fund baby who grew up with beach views in the shadows of country club tennis courts. But, don’t worry. He has opinions of our military he’s very eager to share.

During a House Armed Services Committee hearing, General and Chairman of the Joint Chiefs of Staff, Mark Milley, said he wished to explore the area of academia that looks into the intersection of race and law. During this hearing, he schooled and embarrassed Representative (sic) Matt Gaetz who was asking about the military “embracing” Critical Race Theory. Gaetz hasn’t been spanked this hard since the last time he paid a teenage girl through Venmo after flying her across state lines to do it.

General Milley said to Gaetz, “I do think it’s important. actually, for those of us in uniform to be open-minded and be widely read. And the United States Military Academy is a university. And it is important that we train and we understand — I want to understand white rage, and I’m white — and I want to understand it. So, what is it that caused thousands of people to assault this building and tried to overturn the Constitution of the United States of America? What caused that? I want to find that out.”

Gaetz was shaking his head the entire time…or it was a side effect after accidentally taking roofies shaped like Bam-Bam.

Milley said he was offended the U.S. military was being accused of “being ‘woke’ or something else” for studying theories that exist.

Late night host and comedian Seth Meyers said, ““The GOP used to accuse anyone who opposed their wars of not supporting the troops and now they’re accusing the troops of being too woke. Soon they’re going to start accusing SEAL Team 6 of committing voter fraud.”

It’s so funny that when an athlete kneels during the playing of the national anthem before a game, white conservatives claim it’s disrespecting our military and scream in a rage, “Fire that sonofabitch.”

But when a white conservative, who is not a veteran, does it, he’s defending our values or some crap like that.

Since Matt Gaetz is a sycophantic troglodyte with a lifetime membership in the racist Trump cult, Tucker felt it was up to him to defend the racist congressman who enjoys sharing nude photos of girls on the House floor. Guys who share the same extra-small condom size need to stick together.

“White rage is not a medical condition. It’s not even a legitimate academic theory. It doesn’t exist,” Tucker said in a full-on rage.

The irony continued to escape Tucker that he, a trust-fund baby boarding-school white guy was defending white rage on the favorite show of Oath Keepers, Proud Boys, Neo Nazis, the Klan, the MAGA cult, Cheesecake Factory enthusiasts, people who say “anywho,” Ted Nugent, Scott Baio, and other assorted white nationalists. With a name like Tucker, your credibility on racial matters is about as good as that of guys named Brett, Jared, Todd, Colin, Dirk, Biff, Brad, Bryce, Landon, Tripp, Chase, Garrett, Thad, Preston, Chip, Paxton, Scooter (that guy got beat up a lot), or Chaz. If your parents named you Chaz, screw you, Chaz. Your parents had every intention of you growing up to be a Docker-wearing certifiable douchebag. It’s like having the last name DeVille and naming your daughter Cruella…then being surprised she likes spotted fur coats.

Tucker, who was raised to be douchey and wear bowties, raged on and said, “White rage is a racial attack. So here you have the chairman of the Joint Chiefs of Staff in a congressional hearing leveling a race attack against American citizens, the guy who’s supposed to be protecting our country.” American citizens, who were 99 percent white and terrorists.

Fox fucker Tucker went on to say, “We shouldn’t have a chairman of the Joint Chiefs of Staff who attacks Americans based on their skin color. It’s disgusting.”

So, why is Tucker’s show the top-rated show for Nazis?

This show was Tucker doubling-down from a previous show where he called the Joint Chiefs chairman “stupid” and “a pig,” adding Milley got his job because “he knows who to suck up to.” I’m sure Tucker got his job at Fox News based on his impeccable credentials as a journalist.

Tucker carried on about the General and said, “Hard to believe that man wears a uniform. He’s just that unimpressive. Notice he never defined white rage.” Tucker, he did define white rage. Except, you think that definition was a bunch of tourists visiting the Capitol.

CNN’s Brianna Keilar (I love her) pointed out that Tucker’s show is another definition of white rage.

Keilar said, “Milley is not immune from criticism, but look at the stripes on his sleeve. Ten of them, we counted. Each one of those overseas service bars is six months deployed. That is five years. That is more time than Tucker Carlson spent at his probably third-choice boarding school.”

She added, “Tucker Carlson didn’t serve. His biggest achievement is having nine lives in the world of cable news, making a bowtie famous, and getting away with promoting conspiracy theories night after night after night.”

If you’re a white conservative and Brianna Keilar’s comments enrage you, good news. There’s a term for that.