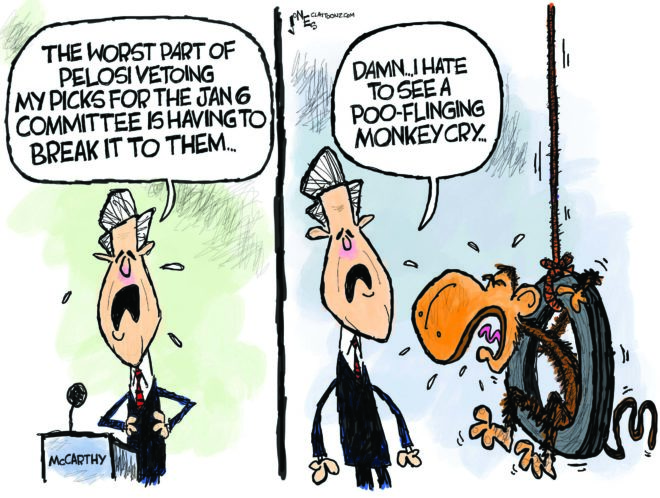 The first time the Democrats tried to create a committee to investigate what happened on January 6, they consulted with Republicans before they held a vote. Kevin McCarthy demanded equal representation on the committee with full subpoena power. He got that. But since he never wanted an investigation in the first place, his party still voted against the committee. Do you know what they called a committee with an even number of Democrats and Republicans with both having full subpoena power? They called it “partisan.”

The vote passed the House for that commission, but Republicans in the Senate killed it, thanks to the filibuster bullshit Joe Manchin won’t get rid of. Since Democrats control the House, Nancy Pelosi decided to take matters into her own hands and create a House Commission…and she still invited Republicans. In fact, she even gave one of the Democratic seats to a Republican.

But this time, since Republicans rejected the committee that gave them everything they demanded, Pelosi decided this one would have eight Democratic appointments and five from Republicans. So while Kevin is screaming the committee is partisan, it’s really not. But, in order to avoid Republican bullshit as much as she can, she gave herself the power to veto any of Kevin McCarthy’s picks. That was a smart move on her part.

At first, Kevin said he wouldn’t appoint anyone to the committee and warned that if any Republicans joined, then he would strip them of all committee assignments. Then, he changed his mind and set out to select five goons, er, Republicans to sit on the fact-finding committee. Kevin appointed Rodney Davis, Kelly Armstrong, and Troy Nehls, with only Nehls of the three not voting to certify the election.

But, he also appointed Jim Banks and Donald Trump’s favorite poo-flinging monkey, Jim Jordan. McCarthy’s intention was to seat members who would deflect and distract during testimonies. Basically, fling poo.

Surprise! Nancy Pelosi rejected Banks and Jordan. McCarthy responded by pulling all five of his members from the committee and said, “Unless Speaker Pelosi reverses course and seats all five Republican nominees, Republicans will not be party to their sham process and will instead pursue our own investigation of the facts.”

First off, Kevin…what are you threatening with? What do you have?

Second, you don’t put fuckers like Banks and Jordan on a committee when you’re trying to find facts. Nancy was right to pull those two members.

Jim Jordan, like Banks, voted against certifying the election. During a speech on January 6, Jim Jordan said he would never be convinced Joe Biden won the election because Trump had a lot of people at his rallies and Biden rarely left his house to campaign. So sure, let’s put the guy on the committee who would rather go with his gut than election results.

Jim Jordan also coordinated with Donald Trump in trying to stop certifying the election and with spreading the Big Lie that he won. Trump gave Jim Jordan a fucking medal for his gaslighting and lying about the election.

Jim Jordan should be subpoenaed to testify. He says he talks to Donald Trump weekly. Kevin McCarthy was on the phone with Trump during the insurrection, so he’s a witness too.

The one Republican on the committee, Liz Cheney, slapped Jim Jordan’s hand on January 6 during the insurrection and told him, “You fucking did this.”

McCarthy whined, “This represents an egregious abuse of power and will irreparably damage this institution,” he said in his statement. “Denying the voices of members who have served in the military and law enforcement, as well as leaders of standing committees, has made it undeniable that this panel has lost all legitimacy and credibility and shows the Speaker is more interested in playing politics than seeking the truth.” But you don’t seek the truth with people like Jim Banks and Jim Jordan.

The attack on the Capitol was conducted by Trump supporters. This is a fact. They were white nationalists. That is another fact. They made a bee line from a Trump rally to the Capitol after Trump told them to. We have it on tape. They were not welcomed into the Capitol by the police with hugs and kisses as Donald Trump claims. They broke through police lines, beat cops with flag poles, pipes, batons and other weapons, while spraying them with bear spray. They climbed in through broken windows, stomped on police, shit and pissed in the hallways, and even bit one cop’s fingers off. Over 300 Proud Boys were involved, wearing bullet proof vests, military helmets, and coordinating through walkie-talkies. Some were carrying nooses while screaming to hang Mike Pence. Some had Confederate and Neo-Nazi flags. And of course, there were Trump and MAGA flags. And Republicans don’t want to get to the bottom of any of this.

McCarthy says the committee needs to find out why Pelosi failed in protecting the Capitol, yet during the insurrection, he was on a phone pleading with Donald Trump to send the National Guard…which Trump ignored for hours. He doesn’t want to investigate that?

The hearings start on July 27 and the first four witnesses are Capitol Police officers who were injured during the attack. Republicans don’t want to hear their testimony. Other witnesses should be Jim Jordan, Kevin McCarthy, Ivanka Trump and chief-of-staff Mark Meadows, who kept sending Ivanka to plead with her father to call the rioters off.

Others who witnessed Trump in the White House that day include Keith Kellogg, Eric Herschmann, Dan Scavino, Kayleigh McEnany, Rudy Giuliani, Donald Trump Jr, Eric Trump, and Kimberly Guilfoyle. They should all receive subpoenas to testify. So should Mike Pence, who Trump orderd to come to the White House so he could order him to overturn the election. John Eastman and Mo Brooks, who both spoke at the rally on January 6, should also be made to testify.

During the attack, McCarthy was on the phone with Trump. Trump told him the attackers were Antifa. After McCarthy assured him they were indeed Trump supporters, Trump said, “Well, Kevin, I guess these people are more upset about the election than you are.”

McCarthy knows the truth but he doesn’t want it revealed. He’s like a victim of spousal abuse telling the cops nothing happened and he just clumsily walked into the wall again. Oddly enough, his refusal to participate may be the best thing he can do for our country.

Now, without McCarthy’s poo-flinging monkeys on board, this committee can get to the bottom of the attack on the Capitol by Trump’s MAGA terrorists.

Thank you, Nancy Pelosi, for rejecting the poo-flinging monkeys.