Maybe you remember this Trump gem from 2016: “I think (Hillary) was out there with classified information. She was giving it to anybody. And the FBI did nothing about it…The top people were scum, absolute scum.”

Fooled you! Trump didn’t say that in 2016. He said it on Fox News over the weekend.

Why? Because he just can’t quit her.

Last Thursday, when he was convalescing with COVID-19, he phoned into the Fox Business Network and asked, “Why isn’t Hillary Clinton being indicted?”

Perhaps the day will come when the people around this broken grifter will get him the serious help he needs. Because apparently he doesn’t even know what year it is.

I’m joking, of course. He knows very well that it’s 2020 and that he may well be electorally humiliated. His big problem is that he has failed to make Americans hate Joe Biden. Only his cultists buy the lie that Biden is a tool of the “radical left,” or the lie that Biden is allied with “anarchists,” or that “Sleepy Joe” is mentally daft. (Heck, at this point, “sleepy” sounds good. We can all use a pleasant nap after our long waking nightmare.)

Since Trump can’t slime Biden, it appears his only pathetic play is to travel back in time to the good old days. He’s like the former high-school jock, years later and gone to fat, who can’t stop reminiscing about the prank he once pulled on the smart girl in class.

Naturally, Trump has enablers. Secretary of State Mike Pompeo excitedly told Fox News that they were about to drop the hammer on Hillary: “We’ve got the emails. We’re getting them out. We’re gonna get all this information out so the American people can see it.”

Right. Because an electorate that’s reeling from a pandemic is hungry to hear about Hillary’s emails. These revelations (where are they, by the way?) are sure to hurt her 2020 electoral prospects in the Rustbelt.

But I guess this is what a craven campaign feels compelled to try when there’s nothing else left. Last month, Trump toady John Ratcliffe, the so-called Director of National Intelligence, declassified an intel assessment – a Russian intel assessment! – which claimed that the Trump-Putin 2016 election alliance never happened, that it was a fake story cooked up by Hillary.

By the way – not that anyone remembers – Trump’s own Justice Department closely scrutinized the Hillary email “scandal,” and in October 2019 it issued a report which concluded: “There was no persuasive evidence of systematic, deliberate mishandling of classified information.” (That should answer Trump’s question about why Hillary hasn’t been “indicted.”)

Here in 2020, it really doesn’t matter whether voters remember the Justice Department’s exoneration, because voters don’t have any interest in replaying anything about Hillary. There are, shall we say, far more pressing concerns.

If Trump wants to resurrect the remnants of his so-called glory days, that’s fine. It’s a sign of weakness that even Fox Business Network anchor Dagen McDowell recognized the other day.
“I am not sure it helped his campaign to talk about Hillary Clinton’s emails and going back down that rabbit hole like it was four years ago,” McDowell said. “It didn’t really focus on the very issues of what the American people want to hear.”

And why do rabbits retreat down to their holes? Because holes are great places to hide, to feel safe and secure. You get my drift. 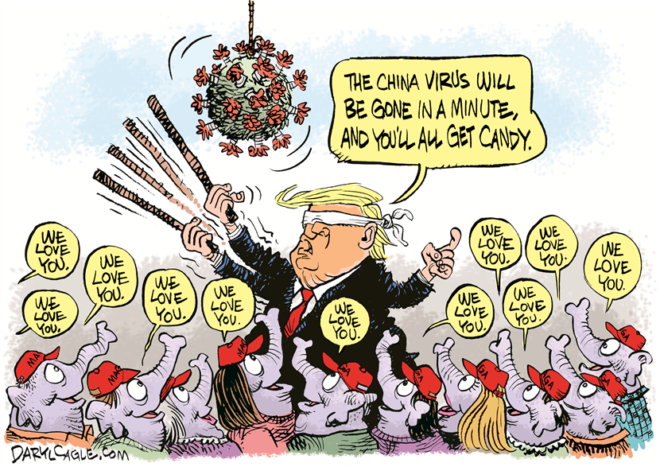