Fat City is the finest novel about boxing out there 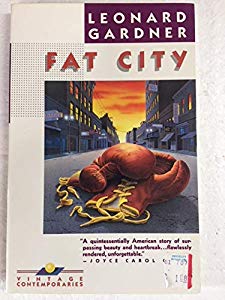 I’ve decided to throw up a book review I had published too many years ago in the long-gone Salt Lake City Event magazine. It is of the novel, Fat City, by Leonard Gardner. It’s the best boxing novel published since The Harder They Fall. It’s also a great John Huston-directed film. Things are slow in December in the fight game, so enjoy this review. Buy it here.
—

Fat City, by Leonard Gardner, reminds me a lot of a John Steinbeck novel. It takes place in northern California — Stockton, to be exact — and is a story about lost dreams, skid row, alcoholism, self destruction and day labor workers picking crops and being bossed around by callous overseers. The time is the late 1950s. Billy Tully is a washed-up 29-year-old ex-boxer who barely survives life in a downtown hotel. Tully carries a major torch for his ex-wife, who left him when his fighting career went south. He works picking fruit and spends his nights drinking. Sometimes he flirts with Oma, a young, alcoholic, bitter widow who lives with a black man.

One day Tully goes to a YMCA, and coaxes an 18-year-old named Ernie Munger to spar with him. To Tully’s surprise, Ernie whips him handily that day. Prodded by Tully, Ernie goes to the gym and starts training under the eye of Ruben Luna, who used to train Tully. Ernie, who works nights at a gas station, marries his girlfriend Faye when she becomes pregnant. Tully keeps working the fields, but begins to imagine a comeback. He moves in with Oma, and then follows Ernie to the gym to start his own comeback under Luna s watch.

Fat City is a lot more than a boxing tale, however. Gardner’s writing is superb. He has a talent for getting inside the heads of and fleshing out the personalities of even minor characters. For example, there’s this young boxer named Wes Haynes. He trains hard and is filled with dreams of success. In his first fight, Wes is knocked out in the first round. “Wes … was overcome with dejection. He had made no secret of his training. Acquaintances at school had spoke to him as if he were a professional, and he had not cared to correct them. He had believed he would be one soon enough … Now he felt he should have known all along that he was nothing.”

There is no glamour in the fight game in Gardner s novel. Tully and Ernie are brought to the gym for quixotic reasons; Tully to regain the glory he had in his youth (and maybe his ex-wife, although that’s a pipe dream more fueled by booze than love). Ernie just wants enough extra cash to support a wife and baby. But there’s no money in fighting. Ernie gets $10 for fighting four round bouts. Tully’s comeback fight — a main event 10-round tough win over a fading, ring-wise veteran from Mexico — nets him only $100. He soon returns to booze — even Oma has left him. Alcoholism destroys Tully. It makes him a self-pitying whiner. He blames his manager Luna for a long-ago boxing loss. Soon after Tully’s comeback win, he is filthy and homeless, struggling to find a place to sleep on the street.

Perhaps Ernie is meant to be a younger Tully. However, he lacks the talent of his mentor and we’re left with the impression that boxing won’t consume his life. He’s roped into marriage with Faye before he’s ready. There is a scary scene where the usually mild-mannered Ernie is consumed with jealousy after seeing an ex-boyfriend of Faye’s. In a mild yet chilling manner, he demands from Faye to know about her past sex life, all the while insisting it’s no big deal. Faye, never having seen this insecure, possessive side of her new husband, eventually bursts into tears. “…that deep animal moaning, terrifying in its immodesty, rose from behind her hands. It was a sound he had never heard before. … Faye, it doesn t bother me. It doesn’t bother me. It really doesn’t bother me.”

Fat City gives voice to the shadow people of the streets. The ones who spend hours in the bars, wake up in ratty hotel rooms, hang out at bus stops waiting to be driven to a field to pick crops, and earn just enough cash to be able to go on a week-long bender in their hotel room. For Tully, there is no difference between winning and losing. His long-term fate has already been determined. His boxing ability can only provide a short respite from another slide. But Gardner does not see Tully as a quitter. No one s a quitter among Gardner s street people. They re survivors. They claw out lives any way they can, regardless of the baggage that keeps them down.

A footnote: Fat City was made into a movie in 1972. It was directed by John Huston and starred Stacy Keach as Tully and Jeff Bridges as Ernie. It garnered excellent reviews and is available on DVD.

This review is cross-posted at The Utah Fight Game blog. 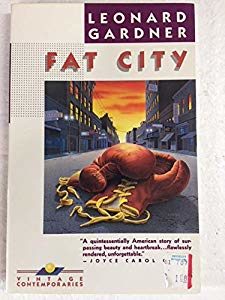