Categories Menu
Home » 2016 Elections » Elect Me Once, Shame on Me…

Elect Me Once, Shame on Me… 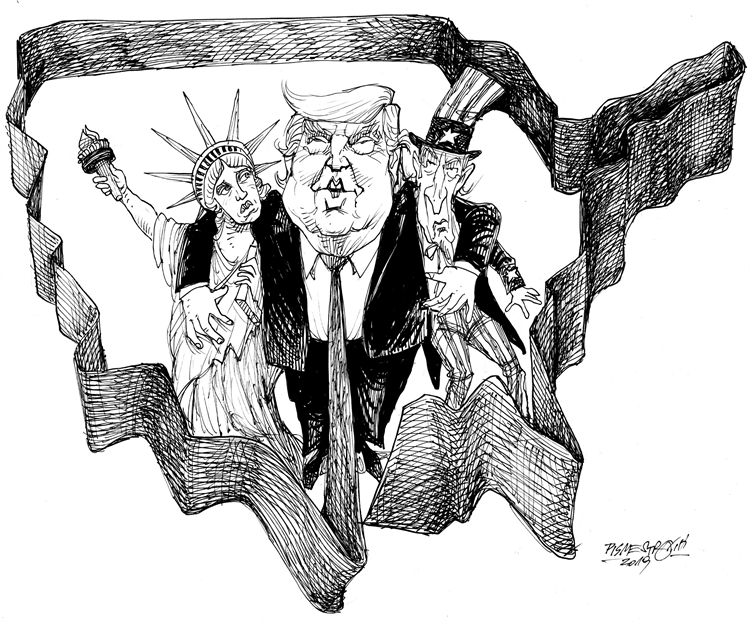 Seventeen years ago, before a Nashville audience of teachers, parents and schoolchildren, then-President George W. Bush (I never thought I would miss him!), referring to Iraq’s Saddam Hussein’s and his regime’s alleged deceit, said:

There’s an old saying in Tennessee — I know it’s in Texas, probably in Tennessee — that says, fool me once, shame on — shame on you. Fool me — you can’t get fooled again.

It was then, when New York Times Op-Ed columnist Gail Collins really got inside the thin skin and weird mind of the mogul.

In “Donald Trump Gets Weirder,” Collins criticizes Trump’s “faux campaign,” his born-again birther campaign and Trump’s main argument for why he would make a good president: his alleged business success. “Has Obama ever hosted a long-running reality series? Owned a bankruptcy-bound chain of casinos? Put his name on a flock of really unattractive high-rise apartment buildings? No!”

Of course, the thin-skinned “counterpuncher” could not resist and a week later, in a long, rambling Letter to the Times’ Editor, Trump attacked Collins, a respectable journalist and columnist, in his now-typical slash-and-burn, demeaning style.

That prompted me to also pen a letter to The Times’ editor in which I lamented how The Times – in publishinfg Trump’s letter – had ignored “so many of its own rules on letter length, decorum and, perhaps most important, the one about letter writers being ‘entitled to their own opinions, but not to their own facts…’” as ” stated in The Times own “compact” on Letters to the Editor.

But, on second thought, I praised The Times for publishing the would-be president’s tirade because, as I wrote

Mr. Trump’s irascible embrace of the widely discredited and condemned “birther” movement so early in the presidential campaign has become his own sword of Damocles — one that will eventually shatter his presidential ambitions.

How wrong I was eight years ago. In November 2016, Americans elected Donald J. Trump to be 46th president of the United States.

In the concluding paragraphs of his rambling letter, Trump doubles-down on his Birther gospel and gaslights, “Open your eyes, Gail, there’s at least a good chance that Barack Hussein Obama has made mincemeat out of our great and cherished Constitution!”

Today, after three years of ignoring, tearing-up, “making mincemeat” of the Constitution; after becoming only the third president in the history of our nation to be impeached, the great pretender (my apologies to The Platters), may still be on his way to re-election – according to some.

Perhaps what former President Bush was trying to predict when he made mincemeat of that aphorism was, “Elect me once, shame on me. Elect me twice, double-shame on you…”