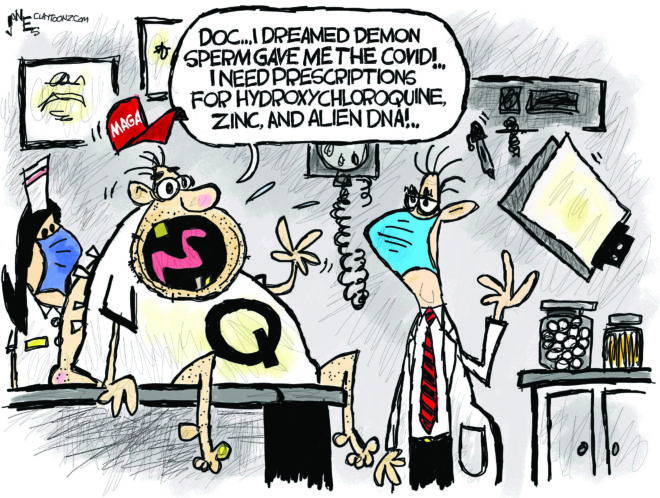 Yesterday, during his bogus coronavirus hearings that are actually replacements for his hater rallies, Donald Trump wondered out loud why Dr. Anthony Fauci is more popular than he is. For his answer, maybe he should consult with Dr. Demon Sperm.

In contrast, Donald Trump ignored the virus, downplayed it, politicized it, and spread lies while it has killed nearly 150,000 Americans and ruined the economy. And finally, a great reason Donald Trump’s numbers are so low when it comes to handling the virus, he’s ignored the very accomplished doctor on his team and has relied on the junk science of conspiracy theorists and loons who are seriously fucked in the head. Yes, that’s a medical term for this blog, “seriously fucked in the head.”

After seeing Donald Trump’s choice for his personal physician, nobody anywhere ever ever ever should listen to him ramble incoherently about anything that has to do with health and medicine (or anything else for that matter). The man actually believes human bodies are like batteries, with energy that doesn’t replenish, and we waste it on exercise. And now, he’s telling Americans to follow the medical advice from Dr. Demon Sperm. What?

Donald Trump retweeted a video of Dr. Stella Immanuel, a Houston doctor from Nigeria who was part of the “White Coat Summit,” a gathering of a few doctors who call themselves America’s Frontline Doctors and dispute the medical consensus on the coronavirus. She and the other doctors gave testimonials on the steps of the Supreme Court in an event organized by the group Tea Party Patriots, funded by wealthy right-wing assholes.

A video of the event went viral as the doctor pushed the drug hydroxychloroquine and claimed people don’t need to wear face masks and that a cure for the coronavirus has been found.

“Nobody needs to get sick,” Immanuel said. “This virus has a cure.” Then she said, “Hello, you don’t need a mask. There is a cure.” Hello? Are you seriously fucked in the head? Yes. Yes, she is.

The video, captured by Breitbart, gained over 13 million views and was shared by Donald Trump and his idiot son number 1, Donald Trump Jr. Later, the video was removed from YouTube and Twitter for pushing junk science. A conservative political cartoonist I know shared the video while declaring them “real doctors,” only to discover it was removed and replaced with a tag saying, “False information.”

Despite being pushed by the Trumps, the conservative student group of idiots, Turning Point, and those pro-Trump medical luminaries (that’s sarcasm) Diamond & Silk, hydroxychloroquine doesn’t help fight the coronavirus. Studies have failed to find proof the drug has any benefit in treating the virus and the Food and Drug Administration revoked its emergency authorization to use it to treat it, saying it hadn’t demonstrated any effect on patients’ mortality prospects.

But, hydroxychloroquine isn’t the craziest shit the Houston doctor is pushing. From her medical office in a strip mall, she’s selling the belief scientists have created a vaccine that prevents people from being religious, the government is run by lizard people, and women have gynecological problems after dreaming they had sex with demons and witches.

She also claims she’s cured over 300 people of the coronavirus without providing any proof…and wait…let’s go back to this demon booty stuff.

Dr. Immanuel has posted videos on YouTube of her sermons where she claims medical issues like endometriosis, cysts, infertility, and impotence are caused by sex with “spirit husbands” and “spirit wives” by having sex with them in your dreams.

Now that she’s found the source of impotence, congressional Republicans will push to fund a study on how to purge our nation of these buzz-killing sex demons.

The doctor also claims ailments other than those in the hoo-ha stem from “demonic sperm,” such as financial ruin. It may also lead to one having her license to practice medicine taken away. Demonic sperm is like sand. It gets everywhere.

When asked yesterday about the doctor and her “medical” theories, Donald Trump said she was very “impressive” and “spectacular.” And then that “maybe” the doctor pushing those theories was her or it wasn’t. Then he ran from the room as the next question was being asked.

Donald, it was she. There’s no maybe about it. The real scientific phenomenon here is that we can’t convince 60 million people not to vote for the guy endorsing Dr. Demon Sperm.

The videos were removed from most social media, and Twitter even temporarily suspended Donald Trump Jr’s account. Removing the videos pissed Dr. Stella Immanuel off.

She tweeted yesterday, “Hello Facebook put back my profile page and videos up or your computers with start crashing till you do. You are not bigger that God. I promise you. If my page is not back up face book will be down in Jesus name.”

The last I checked, Jesus has not shut down Facebook. neither have the witches, lizard people, or the demon sperm.