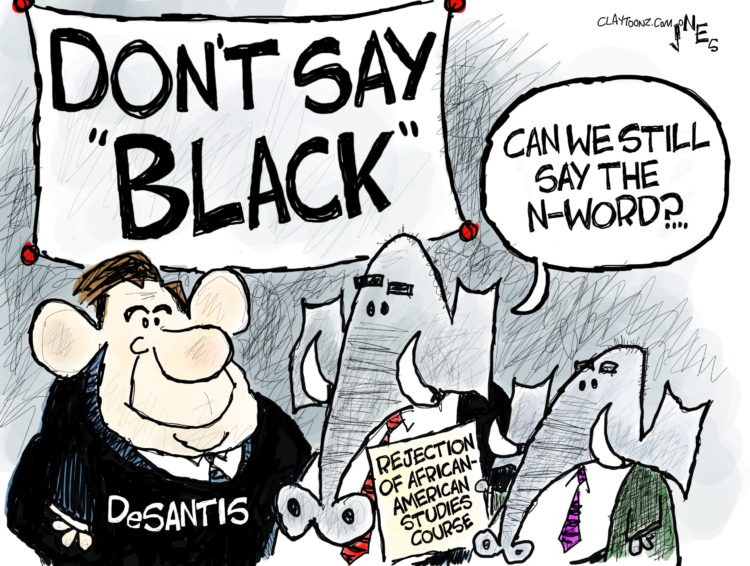 If this cartoon looks familiar, it’s because it’s a sequel.

Now, DeSantis’ administration is rejecting a course in African-American studies from being taught in Florida, where he says “woke goes to die.”

The course is an Advanced Placement Placement African-American Studies course which the goon administration claims “breaks the law,” though they’re NOT specifying which law it’s violating. The DeSantis administration sent a letter last month to the College Board Florida Partnership arguing that “the content of this course is inexplicably contrary to Florida law and significantly lacks educational value.” I wonder if the letter was in all caps.

Do you know what really lacks educational value? Anything proposed by Republicans.

Florida Democratic state senator Shevrin Jones, the state’s first openly gay senator, lashed out saying, “Florida is doing its best to tilt the scales and shut down important, much-needed discussions of race, slavery, stolen lands, and undeniable history that have led to where we are as a society today. Governor DeSantis’ whitewashing of history and book bans are his latest assault on American history and our First Amendment rights. Horrifyingly, it is our vulnerable and underrepresented students who will suffer the most as a result.”

Ivory Toldson, the NAACP Director of Education Innovation and Research, said, “Ron DeSantis’ flippant dismissal of an AP African American Studies course is not only a dereliction of his duty to ensure equitable education for all Floridians, but shows clear disdain for the lives and experiences that form part of our national history.”

“Dismissing this important subject as lacking “educational value” defies centuries of evidence to the contrary. African-American history is American history, and failure to comprehend this very simple fact is un-American in and of itself.”

All signs point to the law that’s supposedly being violated is the Stop Wrongs to Our Kids and Employees Act into law, which is commonly referred to as the “Stop Woke Act.” This ridiculous law, parts of which has been shut down by a court, prohibits any instruction that could make someone feel “personal responsibility” for historic wrongdoings because of their race, sex, or national origin.

It basically says you can’t teach anything that makes someone else feel bad which for me, would have been math class. What the goons are doing here is trying to ban black history or anything pertaining to it that could make a white kid feel guilty, such as the fact that white people in this country enslaved black people. The law is a free-speech ban.

DeSantis says the law against “wokeness” is to stop the racism being spread by Critical Race Theory, which isn’t being taught in any schools. Conservatives are arguing that this new Advanced Placement course is CRT, but it’s not. It’s black history which by the way, is American history.

Nikole Hannah-Jones, the creator of The New York Times’s 1619 Project, tweeted, “Remember when we were told they weren’t opposing the teaching of Black history, just ‘CRT’? And how many dismissed those of us who said these laws were anti-history laws, and anti-Black? Perhaps one day folks will listen to those who know.”

She also said, “Our history has long been treated as illegitimate. It has always been contested.” In case you haven’t noticed, there are zero efforts in this nation to ban other aspects of American history, just the black parts. Hmm. It makes you wonder.

DeSantis’ spokesgoon said, “The course is a vehicle for a political agenda and leaves large, ambiguous gaps that can be filled with additional ideological material, which we will not allow.” You mean, ambiguous like saying it violates a law without specifying the law it violates?

During his inauguration speech to start the second term he hopes not to finish, DeSantis said, “Florida must always be a great place to raise a family…we will enact more family-friendly policies to make it easier to raise children and we will defend our children against those who seek to rob them of their innocence.” That sounds like some shit the White Citizens Council from the deep south 1950s would say.

Ron DeSantis is a racist. During his first campaign, he aired ads of his toddler building a racist border wall out of Legos. He signed a law making it legal to run over Black Lives Matters protesters. He’s shipped brown immigrants to sanctuary cities from Texas as a political stunt that scores points with yee-haw fuckers. Now, he’s banning black history. Teaching important parts of American history is now illegal in Florida.

Florida isn’t where “woke goes to die.” Thanks to Ron DeSantis, it’s where education goes to die.