Posted on September 16, 2020
You are here: Home / At TMV / DONALD TRUMP’S BEAUTIFUL TREASON (Cartoon and Column) 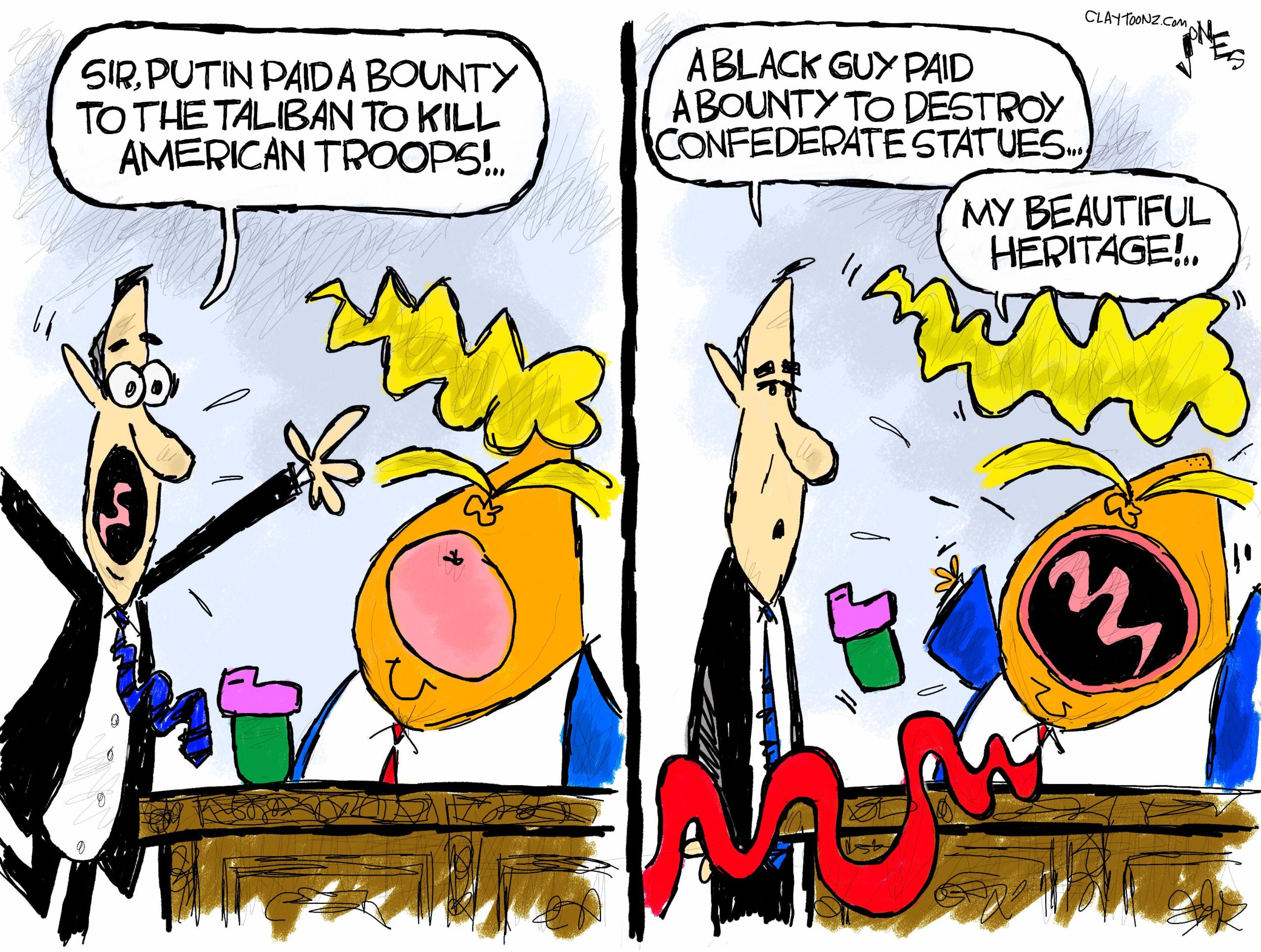 Donald Trump’s administration is so inept, their coverups are often nearly as bad as the crimes.

When you heard Russian President Vladimir Putin put out bounties for the Taliban to kill U.S. troops in Afghanistan and Donald Trump didn’t do anything about it except continue to invite him to the G7, and your first thought was, “How do I defend this?”, then you’ve failed as a patriot and an American.

Granted you sold your soul to Donald Trump a long time ago but at this point, you’re way past the point of no return.

U.S. Intelligence, which Donald Trump doesn’t trust, uncovered months ago Russia was paying bounties to the Taliban to kill American troops. According to The New York Times, Donald Trump was briefed on this last March. Donald Trump has done nothing…until today.

What did Donald Trump do about it today? He said he was never briefed about it. This is where the coverup is nearly as bad as the crime. and again, Donald Trump is a liar.

Donald Trump is more concerned about defending Confederate statues than U.S. troops. Why, he’s actually enacted penalties for those who attack statues of traitors. Putin? Donald Trump hasn’t tweeted anything against him yet. It helps Putin that he’s not black.

When it comes to despots, he takes their side over that of U.S. Intelligence. He sides with criminals and spies over “law and order.” He even defends dictators for murdering Americans like he did with Kim Jong Un’s murder of Otto Warmbier. “Kim says he feels bad about it.” I’m expecting a “Putin says he didn’t do it” over this bounty thing real soon.

Earlier this year, four Americans were killed in a car bomb in Afghanistan. Last year, 22 Americans were killed in combat in Afghanistan. I’m no math expert but I counted, and I’m pretty sure 26 is more than four. Why is that significant? Because every Republican in the nation were livid and went apeshit over the four deaths in Benghazi. The Republican-lead House held hearing after hearing on Benghazi. Hillary Clinton as a candidate for president was forced to testify for 11 hours at a House hearing. What have Republicans today said about this new information regarding Russia, the Taliban, and Trump sleeping on it? Nothing.

Donald Trump has failed America and sold out troops out for his personal little feelings. He’s sold our troops out for his man-crush on Putin. How anyone can still respect that abject failure of a human being is beyond me. Everyone who still rejects this traitor repulses me.

This man has failed with the coronavirus and has cost us more lives. He has put his tiny frail ego before the safety of the American public. Now, he’s turning a blind eye to Vladimir Putin murdering Americans. How much soul does each Republican have left for this guy? How much do you have left for him?

Donald Trump, who is more concerned for ratings and showmanship than being president, is probably concerned over naming for this latest scandal. “Bountygate” is already taken.

If you love Donald Trump more than America, you should leave. I hope Russia has Kool-Aid.