Donald Trump may have axed himself in the foot 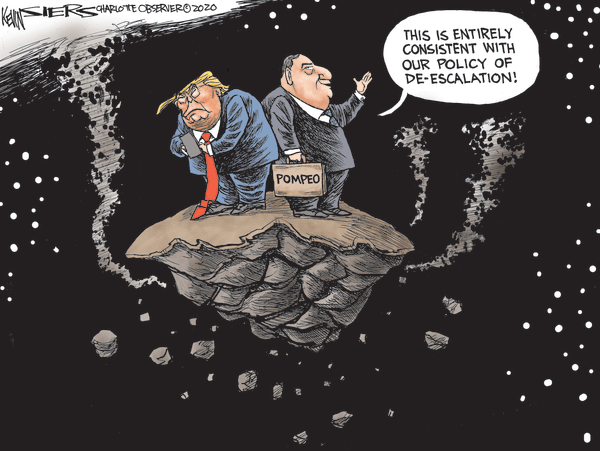 The killing of Iran’s Qasem Soleimani feels like a job well done to President Donald Trump and his advisors, but he seems to have axed himself in the foot and may end up losing some of his most devoted voters.

His threats to Iran of devastating ripostes on its territory if it seeks revenge for Soleimani’s death may cause a new very long war of attrition. That would betray his promise to core supporters of bringing soldiers home from endless foreign wars.

If that happens, he might lose the elections in November. He has already lost the helpers he needs most to win his military confrontation with Iran, even if it remains short of a full-scale war.

As the dust clears several days after the Soleimani killing, the allies who benefit most from Soleimani’s elimination – Saudi Arabia and the United Arab Emirates – are maintaining a studied silence. They are also covertly using Qatar, Kuwait and Oman as back channels to Tehran to seek de-escalation.

The brother of Saudi Arabia’s Crown Prince Mohammed bin Salman arrived in Washington today to prevent his country from being caught in uncontrolled escalation by Trump as he repeatedly lashes out at Iran to prevent retaliation for Soleimani’s death.

Israeli Prime Minister Benyamin Netanyahu, an enthusiastic proponent of the Iranian regime’s destruction, was alone in praising Trump but has kept a low profile since. He reportedly told his cabinet, “The killing of Soleimani is a U.S. event, not an Israeli event, and we should stay out of it.”

All the European allies, the United Nations, China and India have called for restraint and de-escalation. They have maintained a neutral stance neither condemning nor praising Trump’s action. Russia has offered criticism while joining the chorus calling for restraint.

In the US, more voices are being raised every day against a new war and Congress may very soon approve language limiting Trump’s military belligerence towards Iran absent explicit approval from Congress.

The new War Powers Resolution reasserts “Congress’s long-established oversight responsibilities by mandating that if no further Congressional action is taken, the Administration’s military hostilities with regard to Iran cease within 30 days,” House leader Nancy Pelosi said in a letter to Democrats today.

He has doubled down on threats of disproportionate actions like the destruction of 52 targets inside Iran, if its proxies kill or maim Americans anywhere. The US strikes will include cultural sites, which would be a war crime under widely accepted international norms.

Worse, one of Trump’s tweets said, “”The United States just spent two trillion dollars on military equipment. We are the biggest and by far the BEST in the world! If Iran attacks an American base, or any American, we will be sending some of that brand new beautiful equipment their way…and without hesitation!”

Iran has an annual defense budget of $20 billion and weapons of 1970s vintage. There is no question that Trump can bomb it back to the stone age within weeks. But that doesn’t mean America will not be stuck there for years or decades.

The entire world already knows that the US has the deepest pockets and the most formidable military forces. Trump’s need to repeat this constantly has the odor of pride and uncontrolled emotions bordering on immaturity.

“Strength of character does not consist solely in having powerful feelings, but in maintaining one’s balance in spite of them,” said Carl von Clausewitz, the great war strategist.

“The first, the supreme, the most far-reaching act of judgment that the statesman and commander have to make is to establish the kind of war on which they are embarking,” he added.

Trump is falling short of this sage voice of experience. His tweets seem bellicose and his White House advisors seem to have very little idea of the war on which they are embarking.

Thankfully, Congress may find the courage this week to force them to take a step back.

The mighty US military’s devastating invasions of Afghanistan and Iraq produced quagmire instead of neat victories. The devastation of Iran will do no better, especially as America’s soldiers and its people are frustrated to the core of being caught up in other people’s thankless wars.

If Iraq tells US soldiers to leave Iraq and Trump refuses, as he has threatened, Americans in the military bases will have to live holed up in fortresses surrounded by hostile people all around, as they do in Afghanistan. They will also fear for their lives from Iraqi soldiers living inside the fortresses.

The few friendly Kurds and Sunnis will not be able to protect them because a lot of Sunnis also hate America for destroying their protector, Saddam Hussein, and delivering them into the hands of the Shia majority. ISIS could rise again just outside their fortresses while hostile Shia militias would be nearby.

“Savage peoples are ruled by passion, civilized peoples by the mind,” said Clausewitz. Hopefully, American legislators and voters will use their minds more carefully in coming weeks and months.