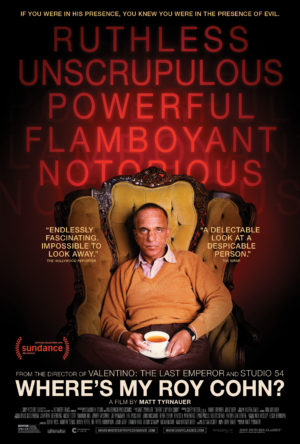 LOS ANGELES –A friend once described him as “ugly and charismatic at the same time.” He was also powerful, ruthless, and an inveterate liar. But his extraordinary prowess as a defense lawyer enabled him to reach the top level of society and become close friends with presidents, future presidents, members of the Mafia, and influential media personalities—many of whom he defended in court at some point in time.

At 20 Roy Cohn graduated from Columbia Law School, and at 23 he was involved in the notorious Julius and Ethel Rosenberg Conspiracy Trial in which the couple was convicted of passing crucial information to the Communists. It was Cohn who urged the Judge in that trial, Irving Kaufman, to impose the death penalty on both Rosenbergs. Years later, when asked if he regretted his role in that infamous case, Cohn replied, “If I could have pulled the switch, I would have done it myself.”

An anti-Communist who was paranoid about politics, Cohn said, “I don’t care how the law is, I want to know who the judge is.” And once, meeting President Roosevelt for the first time, he told the president “I support your attempt to pack the Supreme Court!”

It was FBI director J. Edgar Hoover who recommended Cohn to Wisconsin Senator Joseph McCarthy, who at that time was investigating “homosexuals and perverts.” When McCarthy was appointed chairman of the Senate Committee on Government Operations, he learned that the Senate Permanent Subcommittee on Investigations was a part of that committee, which allowed him to use it for his own investigation of Communists in the U.S. government. For this work he appointed Roy Cohn as his chief counsel.

Their fight with the Army began in early 1954 when Cohn tried to gain favorable treatment for his apparent lover, G. David Schine, who had been drafted as a private. Further, the Senate’s mounting disgust with McCarthy’s unsubstantiated “lists of Communists in government” caused the initiation of the infamous trial known as the Army-McCarthy Hearings. The hearings continued for 36 days and were watched on live television by some 20 million viewers. In the end Cohn and McCarthy were both discredited and accused of “corruption of truth” and damned by the Army’s chief legal representative, Senator Joseph Welch, who addressed McCarthy, saying, “”Until this moment, Senator, I think I never really gauged your cruelty or your recklessness” and “You’ve done enough. Have you no sense of decency, sir, at long last?”

Cohn, making the most of a bad situation, resigned and joined his great uncle’s company, Lionel Trains. Because, as he acknowledged, he “didn’t play by the rule book,” he took over the company within seven months.

Later, indicted for bribery and conspiracy in the takeover of the 5th Avenue Coach Lines bus routes, he defended himself for seven hours and was acquitted. Afterwards he commented that it was “always of political value to wrap yourself in the flag.”

His political education was heightened when Roger Stone (he of the eternal Trump scandals) took over as his mentor. And then Cohn passed on Stone’s teachings to Donald Trump. As Trump’s advisor he instructed him on manipulating the press. If the press reports it, “the public will actually quote whatever you say,” Cohn reportedly told him. When accused of racial biases, attack, Cohn said. Create phony issues; never admit you’re wrong; never apologize; rat out other people, but never put anything in writing. And to keep law enforcement off your back, apply “situational ethics.”

Politically, Cohn provided a window into Ronald Reagan’s presidential campaign to media mogul Rupert Murdoch. And he worked with Trump, when Trump decided to knock down Bonwit Teller’s in order to build Trump Tower on that site. It was alleged that Trump imported 200 illegal immigrants from Poland to do the work and then didn’t pay them. Moreover, it was further alleged,Trump did not use steel to build the new building as he was supposed to; he used concrete, which was much cheaper.

Eventually, Cohn was involved in a governmental lawsuit for owing seven million dollars in back taxes. But, as Gore Vidal noted, “He always manages to stay out of jail. I would like to have him for my lawyer.”

But his “moral turpitude” finally caught up with him when he became the trustee and executor of the estate of Louis Rosensteil, the head of the Schenley liquor organization. Rosensteil’s family claimed that Cohn had had his client sign the documents when he was on his deathbed. Despite the fact that 37 witnesses, including Barbara Walters, Donald Trump, and William F. Buckley testified on his behalf, Cohn lost the case and was disbarred. But even then he insisted, “I wouldn’t crawl. I don’t like any of them. I don’t plead.”

Roy Cohn died in 1986 of complications from AIDS, still denying his homosexuality and claiming that he was dying of “liver cancer.” He was 59 years old.

Perhaps the only one who misses him is President Donald Trump, who, in the midst of his own troubles, was said to have cried out “Where’s My Roy Cohn?” This became the title of Matt Tyrnauer’s 2019 documentary, which will be released in Los Angeles and New York on September 20th.

Citron is a freelance writer who specializes in the coverage of the arts. This article is reprinted from San Diego Jewish World which, along with The Moderate Voice, is a member of the San Diego Online News Association.