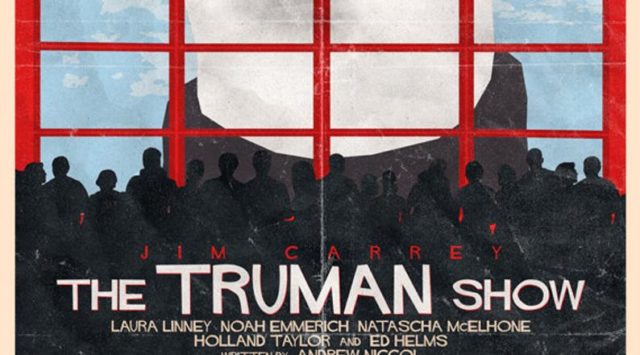 I watched The Truman Show for the first time 2 weeks ago. *audience watching me type this gasps in shock* I’ve always purposefully avoided it because I was never a fan of Jim Carrey as a comedy actor but after watching Eternal Sunshine of the Spotless Mind, I realized there’s more to him than goofy facial expressions and trite lines. So, I decided to give The Truman Show a chance, and it didn’t disappoint.

I’m also glad I waited so long to watch it because as opposed to the millions of viewers who watched it sometime in the 90s, I got to watch it in an era that resembles Truman’s simulation a bit too close for comfort.

While The Truman Show was by no means the first story (be it written or screened) to tackle simulated reality, dystopia, and hyperreality, when it first came out in 1998, the notion that the reality we live in can be almost entirely simulated was certainly mind-boggling and worthy of critical praise, as opposed to everyday and familiar as it is today.

So, what is it about watching The Truman Show in 2019 that still fascinates? Let’s start with the fact that the TV in reality TV has become more real than the reality. Even our current president is a former reality TV host. Television and life are becoming more interchangeable than ever and, as Andy Warhol predicted, everyone can have their 15 minutes of fame, which is now a relative concept anyway.

If micro-celebrity is so common then, we are very much like the actors hired to play the citizens of Seahaven: living our uneventful, repetitive life until we get the cue that it’s our time to shine for a few moments. We are also a lot like the people watching Truman go about his daily business: hungry for an insight into real-people’s life, as boring as it may be.

We are supposed to relate to the audience – the waitresses at the bar, the old ladies, the man in the bathtub – but are we so dissatisfied with our own lives and fascinated by others’ that we would actually watch a show like The Truman Show every day? Well, yes, if you look at the variety of reality shows catering to the public in 2019. Much like Christof, who hides behind the implied notion that he’s just giving the people what they want, contemporary reality TV producers blame the audience as well.

I watched and enjoyed The Truman Show, all the while being aware that up to a point, I’m just like the show’s audience. But the movie is careful about framing its viewers as dumb, mindless consumers. You the collective watching me at home, the movie says, are just like them, of course, but not you the individual. You know better than the rest. You’re special and I know that, don’t worry. You can laugh at what’s happening without overthinking it.

The first question I had after watching the movie was how on Earth is Truman not aware that he’s living inside a simulation? The show is supposed to simulate real life but it’s so minutely staged that it ends up not looking like real life at all. Pick any contemporary reality show you want and tell me you don’t notice the same pattern.

Of course, you can make the claim that Truman is so oblivious because he doesn’t actually know how real life is supposed to look since he was born inside the simulation, but if you ran into the same people, in the same place, at the exact same time every day, wouldn’t you suspect something sooner?

Sure, The Truman Show is more than just a satire, it’s also fantasy, so I’m willing to turn a blind eye at some of its logical fallacies. Even more so, it gets bonus points from me for portraying things that might not have seemed plausible two decades ago that are now very much our reality. As Truman’s reality comes crumbling down, he sees conspiracies everywhere. The thing is, these are all true. He is the center of that make-believe universe.

This is especially relatable nowadays, when it feels like every one of us is individually the most important person. Ads are targeting us specifically, people are watching our live streams, surveillance cameras are following our every move. The paranoia has become so (rightfully) intense that there’s even a mental condition called The Truman Show delusion that causes people to actually believe they live in a reality show and other people are watching them on camera.

If you’ve never seen The Truman Show, you should. If you’ve watched it in the 90s, watch it again and see if and how your perception of it changes. Apparently, when the movie first came out, Peter Weir, the director, wanted to have cameras installed in theaters and cut to the actual audience watching it at some point during the screening. I think it would have been a brilliant move, although it begs the question “is The Truman Show laughing with us or at us?”