Posted on July 24, 2022
You are here: Home / Featured / DAMAGED TRUMP COULD WEIGH DOWN REPUBLICANS 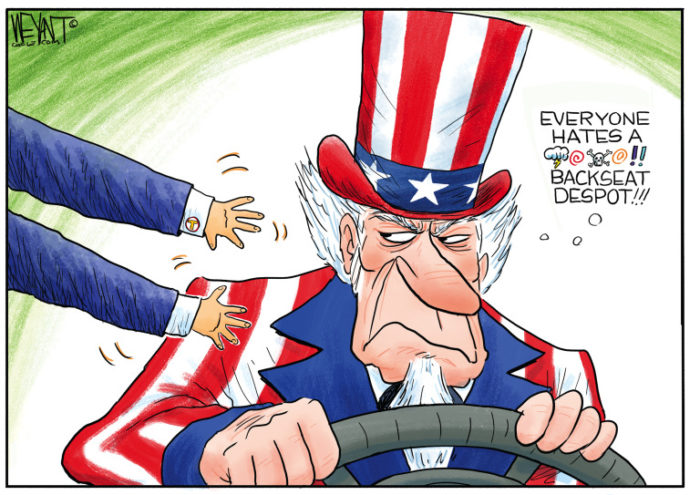 Despite a few points in her testimony in dispute, the narrative laid out by former White House assistant Cassidy Hutchinson concerning the events of Jan. 6, 2021, presents a chilling portrait of a furious president desperately clinging to power surrounded by advisers offering outlandish legal theories to block the certification of Joe Biden as president.

Hutchinson, a 26-year-old former assistant to then White House chief of staff Mark Meadows, offered a compelling tale to the congressional committee investigating the siege of the Capitol, depicting President Trump as the central figure in devising a plot to remain in office while refusing to intervene to halt the mob swarming the Capitol.

While most congressional Republicans were either muted or vague in their reactions, they must have cringed inwardly at her description of senior executive staff aware in advance of the storming of the building and the potential for it to turn deadly yet failed to act.

In the most surreal recounting, Hutchinson told the committee Secret Service agents responsible for Trump’s safety informed her the president attempted to wrest control of the armored vehicle in which he was riding after the driver refused his order to be taken to the Capitol at the height of the assault.

Her story was immediately challenged by Secret Service officers who said the incident never occurred, while Republican critics accused her of peddling outrageous secondhand hearsay as solid evidence.

The committee attested to her credibility while Republican critics ratcheted up their characterization of the panel as a one-sided partisan political show trial that had predetermined conclusions before the first witness was heard.

Her testimony will have no significant impact on the congressional midterm elections, in which voters are more concerned with $5 a gallon gasoline than whether Trump berated his security detail.

But the steady drumbeat of testimony revealing an administration obsessed with remaining in power and seriously debating skirting the law to do so have nicked the former president and led some national Republicans to distance themselves from Trump without renouncing him altogether and earning the wrath of his followers.

While Trump continues to tease a 2024 presidential candidacy, there is a growing body of opinion that the cumulative effect of accounts of his involvement in the Jan. 6 upheaval will weigh heavily on voters’ decisions and a criminal case against him would doom his chances.

His volcanic temper is legendary as is his history of relying on his own instincts – frequently with damaging results – while disregarding the counsel of more experienced and level-headed advisers, most notably those who warned that interfering in the certification process came dangerously close to criminality.

Party leaders justifiably fear that candidate Trump will use a campaign platform to re-litigate his 2020 loss and continue to promote unfounded conspiracy theories of massive voter fraud.

With Biden’s approval rating plummeting to the mid 30 percent level and Americans battered by unprecedented inflation and potential recession, Republicans sense a genuine opportunity to recapture the White House while controlling the House and possibly the Senate.

The party dream of unified control is within reach but could be buried by a Trump presidential candidacy based on an imaginary political cabal that cheated him of victory four years previously.

Americans are yearning for a leader to replace a Biden administration that seems incapable of dealing effectively with punishing cost of living increases, an immigration crisis, crime ridden cities and shortages of everyday living necessities while embracing left-leaning social welfare ideas.

Doubts are seeping in that Trump is that leader.

His candidacy would become a daily reminder of his erratic and chaotic four years, capped by the storming of the Capitol which his Administration encouraged and stood by as the violence spun out of control.

Cassidy Hutchinson’s portrayal of the Trump White House has emboldened Republicans to begin to move from beneath Trump’s shadow.

The path is a narrow one, a delicate balance between recognizing Trump’s grip on his political base and the imperative to rise above the din and uproar exemplified by the former president and appeal to the concerns of American voters.

It is time to accept the road to the Oval Office does not run through Mar-A-Lago.

Copyright 2022 Carl Golden, distributed exclusively by Cagle Cartoons newspaper syndicate. Carl Golden is a senior contributing analyst with the William J. Hughes Center for Public Policy at Stockton University in New Jersey. You can reach him at [email protected]