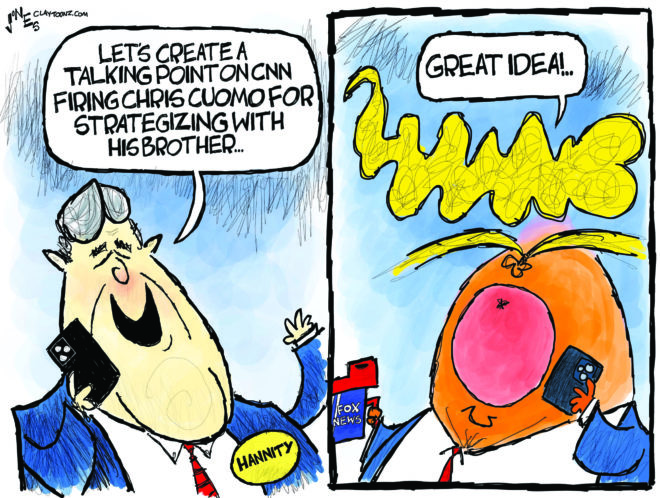 Disclaimer: I freelance for CNN. I draw one cartoon each week for their opinion newsletter. Now, if I worked for Fox News, I wouldn’t have had to tell you that.

CNN fired Chris Cuomo on Saturday. His show occupied the 9:00 PM timeslot which goes head-to-head nightly against MSNBC’s The Rachel Maddow Show (who is also leaving soon) and Fox News’ Tucker Carlson tonight (who’s never going to leave). While it’s going to be difficult for CNN to replace someone who sat in the 9:00 PM chair, it’ll be harder to replace the handoff-show banter between Cuomo and Don Lemon, whose two-hour show begins at 10:00 PM.

CNN already walked a tightrope with Chris Cuomo as his brother was governor of New York. He really couldn’t cover any news about his brother. But, during the pandemic, he would have his brother on which was very entertaining as they’d bicker and insult each other as brothers do. Once when Chris mentioned his wife had given him a haircut, big brother commented that judging from the haircut his wife had given him, she must be harboring a deep resentment against Chris. After Andrew received a COVID test during one of his live briefings (to show how easy it was), Chris presented him with a Q-tip that looked to be about four feet long. It was entertaining stuff, especially to those who have siblings. But the fine line between news and family was eventually crossed.

During Andrew Cuomo’s sex scandal, his brother Chris wasn’t able to cover the story. He mentioned that on the air. All seemed on the up-and-up, but it wasn’t. As it turns out, Chris was helping Andrew with strategy, mostly with how to deal with the press coverage. Chris even used his contacts at other networks to inform Andrew and his team of impending stories on the scandal.

It had been known for months that Chris had some involvement with his brother’s defense. He had said, “I’m not an adviser. I’m a brother. I wasn’t in control of anything. I was there to listen and offer my take.” But a document dump by New York Attorney General Letitia James after an investigation into Andrew’s sexcapade showed that while Chris was working as one of CNN’s top anchors, he was also effectively working as an unpaid aide to the governor.

The dump revealed multiple texts between Chris and several aides and allies of the governor where he sought to use his connections in the press to help prepare Andrew’s team as accusers started to make their stories public.

CNN put Chris on “indefinite hiatus” on Tuesday and hired a law firm to investigate. The network issued a statement saying, “When Chris admitted to us that he had offered advice to his brother’s staff, he broke our rules and we acknowledged that publicly. But we also appreciated the unique position he was in and understood his need to put family first and job second.”

“However,” the network said, “these documents point to a greater level of involvement in his brother’s efforts than we previously knew. As a result, we have suspended Chris indefinitely, pending further evaluation.”

The investigation brought new information to light and the head of CNN, Jeffrey Zucker, fired Chris Cuomo on Saturday. It was the right call.

Journalists are not supposed to work with people they cover. They definitely should not help them craft political strategy to aid their campaigns or administrations. MSNBC’s Morning Joe hosts, Joe Scarborough and Mika Brzezinski were huge friends with Trump. Trump even offered to conduct their marriage ceremony, as a president can do that (like a boat captain. Didn’t you ever watch Love Boat? Though, Trump’s boat would probably be called “Grope Boat”). Joe And Mika even named their pet bunny “Donald Fluffy Trump.” I always suspected Trump was a fluffer. MSNBC never held their on-air couple accountable for their overly-friendly relationship with Trump.

But it’s Fox News where journalism ethics truly go to die. Sean Hannity and Jeanine Pirro have both spoken at Trump rallies. AT Trump rallies. They were speakers on the stage campaigning for Trump. Hannity argues he’s not a journalist, which we are aware of, but he’s on a supposed news network. Whether he believes he’s a journalist or not, he should still have to abide by the ethics of journalism. It’s bad enough Sean, Tucker, and the rest of the Fox News crowd of on-air white nationalists promote conspiracy theories and outright bullshit, but going on the campaign trail with someone they cover should not be allowed. It doesn’t even have to be investigated. It’s on the air.

But it gets worse. Sean Hannity and Donald Trump, during the Trump presidency (sic), would have late-night phone sessions. These two were trading sweet nothings on a nightly basis while conducting political strategy. And Chris Cuomo was fired for helping his brother. Personally, I think being the president’s (sic) personal fluffer for four-straight years is a greater violation of journalism ethics than helping your brother (not that I’m excusing that).

So this week when you witness white nationalist Nazi turdlings doing the happy dance while gleefully praising the dumping of Chris Cuomo for violating journalism ethics, keep all that Fox shit in mind.

But, Sean Hannity does have a point. Fox News is not journalism. But, maybe Fox News should stop pretending that it’s an actual news source.