One year ago, the CDC announced the first case of COVID-19 in the United States, a man in the Seattle-area who had recently returned from Wuhan, China. 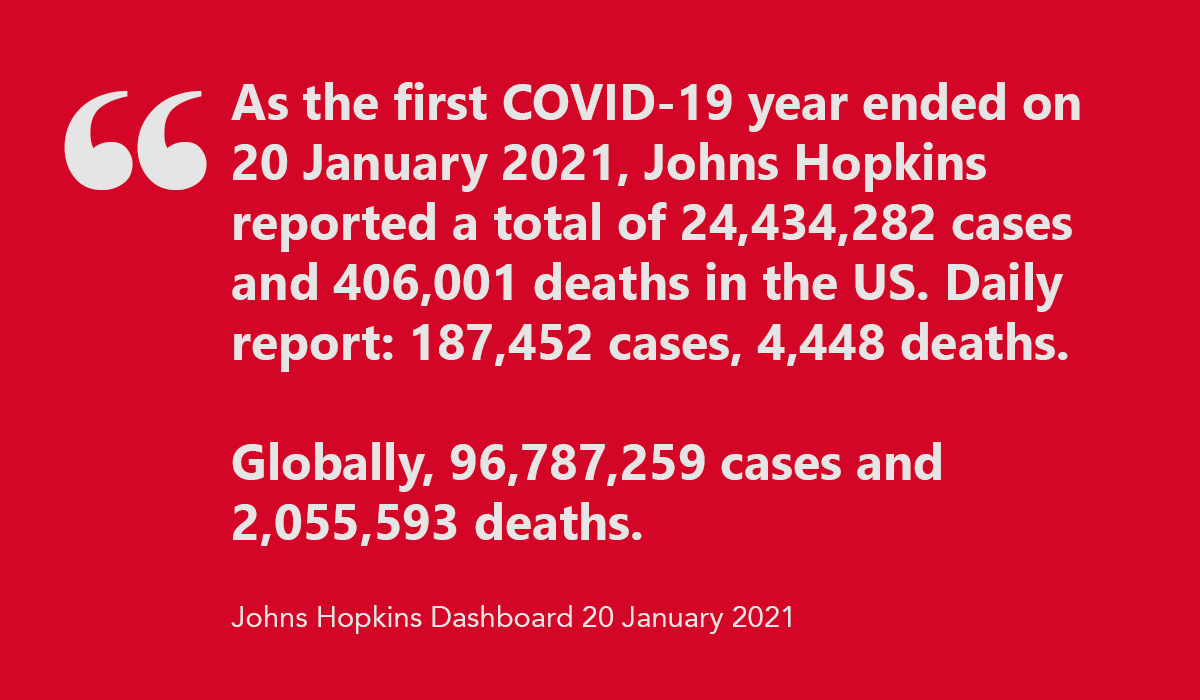 A year ago, 21 January 2020, the CDC announced the first case of “travel-related” COVID-19 in the United States.

Fitting, perhaps, that today Dr. Anthony Fauci told the World Health Organization (WHO) executive board that the United States would remain a member nation, reversing the action of the prior administration.

On 20 January 2021, the 366th day of COVID-19 in the US (last year was a leap year), we had a seven-day average of 195,000 daily cases and 3,062 daily deaths (Covid Tracking Project plus current ID/NE/WA data, as they are reported a day late by CTP). The state with the most cases per capita: North Dakota. The most per capita deaths: New Jersey.

I am getting my first Pfizer shot on Friday. This is the first time that having breast cancer has led to something positive. The vaccination rollout in Washington is flawed, however, because my 86-year-old career Air Force officer father-in-law has yet to hear from the VA. We cannot get him signed up in Snohomish County. The county has public drive-through centers, but little vaccine.s Hospitals and clinics have vaccines, but no (easy) way to push through high numbers.

A report from California illustrates the challenge with vaccine distribution. There are 6.2 million people age 65 and over in California, and officials want to vaccinate 70% of them (4.34 million) with two doses.

Although the US purchased 200 million doses from Pfizer and 200 million from Moderna, these orders will not be fully delivered until mid-year.

With the increased transmission rates of recent virus variants, such as B.1.1.7 out of the UK, vaccination is a race against time…

:: Read more of this newsletter at SubStack