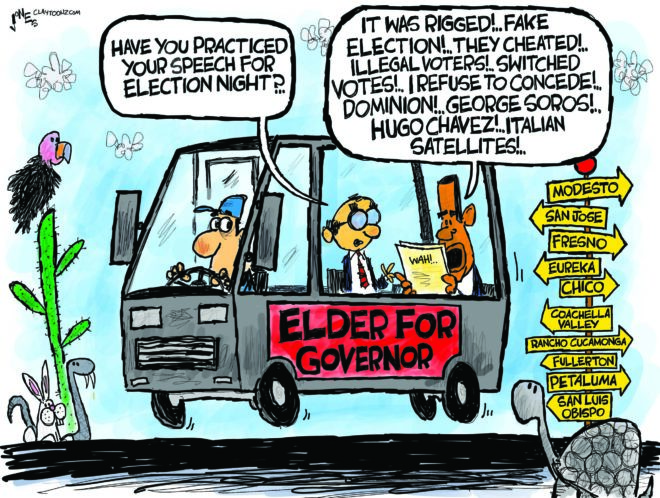 Do you hear that? What is that sound? That sound is millions of Californians holding their collective breath. It will soon be replaced by the sound of Republicans whining.

The reason millions of Californians are holding their breaths is because today is election day for the recall election of Governor Gavin Newsom. The entire recall was engineered politically by Republicans, not because Newsom is a horrible governor but Republicans would rather destroy than build. They would rather the state’s business be put aside for a year while they play games with the state’s flawed recall system.

Sure, there should be a recall system for every state, but in California, the requirements for the recall and to get on the ballot are way too easy.

The recall is two votes. The first vote is if you want to recall the governor. If you don’t want to recall him, you vote no. Regardless of how you voted on the first question, you vote on the second question. Your vote on the second is for who you think should replace the governor if he is recalled. If the vote is yes to recall, then the top vote getter on the second question, no matter how many or how few votes he gets, is governor of California. With 46 candidates on the ballot, the winner will most likely not be the top choice by a majority of California voters. The governor is barred from being one of the recall candidates.

The system is designed to make a maniacal person the governor of the largest state in the nation. And if Newsom is recalled, that’s what California’s going to get. That sounds far-fetched, but keep in mind, we made Donald Trump president (sic) of the United States of America.

There are no prominent Democrats on the ballot. The Democratic Party took the route of presenting a united front behind Governor Newsom and against the recall. The risk here is if the vote to recall Newsom is over 50%, then the next governor of California will most likely be a Republican, which brings us back to Larry Elder.

We covered this guy last week. He’s a lying conspiracy-spreading gun-waving nut with a radio show. Everything he says could come out of the mouth of a Klansmen. Nazis love this guy. He’s a Trump supporter who’s nose-deep into MAGAt land. He drinks the Kool-Aid. Hell, he bathes in it. But, he knows he’s going to lose.

While this isn’t really a race between Newsom and Elder, both candidates have run like it is. The first race is between Newsom and the recall. Then, the race is between Elder and the other 45 idiots on the ballot. But if you vote against Newsom, and even if you plan to vote for someone like Jenner, you’re probably going to make Larry Elder governor. But Elder is no Arnold Schwarzenegger, who won the last recall election.

The only thing worse than a terminator being sent from the future to destroy our planet and society is a Republican terminator in the present trying to destroy everything. Typically, Republicans come from the past. Today, I expect California to tell Larry Elder, “Hasta la vista, Baby.”

Governor Newsom is mostly likely going to win over the recall. And Larry Elder knows this because like Trump, he’s starting to cast doubt on the election.

Larry Elder is using the Trump playbook, which is still weird to me. How does a guy who never read a book, even the ones he supposedly wrote, have a playbook? But Larry’s using it and it’s an extension of the Big Lie that still exists where Trump claims he won the election.

There are still Trump cultists who believe he won and that Joe Biden is an illegitimate president. This is anti-democratic and a card to play by sore losers and lunatics. It’s anti-American.

Larry’s going to lose and for the rest of his life, he’s going to be barking on the radio that he won and was cheated and wah wah wah.

VisitClay Jones’ website and email him at [email protected]