Posted on September 5, 2022
You are here: Home / Featured / Congressional Gold Medal Awarded to Those Who Protected the Capitol on January 6 (UPDATED)

President Biden signs H.R. 3325 – an Act to award four congressional gold medals to the United States Capitol Police and those who protected the U.S. Capitol on January 6, 2021 (below). 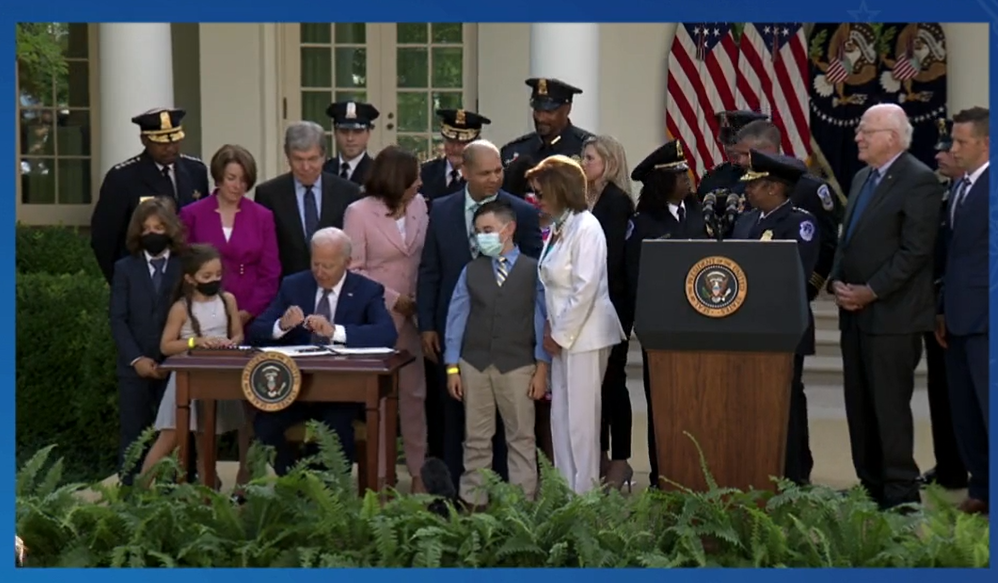 Some of the President’s words:

It breaks my heart. It breaks the heart of the nation to remember that you were assaulted by thousands of violent insurrectionists at the Capitol of the United States of America.

To all of them, on behalf of a grateful nation, thank you, thank you, thank you for protecting our Capitol. Maybe even more importantly, protecting our Constitution. And saving the lives of duly elected members of the Senate and the House and their staffs…In these moments we’re still debating, these were tragic hours back then. You stood in the breach. You did your duty — duty to defend the Constitution of the United States against all enemies, foreign and domestic.

It wasn’t dissent. It wasn’t debate. It wasn’t democracy. It was insurrection…It was riot and mayhem. It was radical and chaotic. And it was unconstitutional. And maybe most important, it was fundamentally un-American.

On Monday, the nation learned of the deaths by suicide of two more U.S. Capitol officers who had answered the call of duty on January 6 and defended the Capitol and its occupants against the violent attempt by Trump supporters to overthrow our democracy.

Their deaths bring to four the number of known suicides by those officers, a grim addition to the death of officer Brian Sicknick, who died shortly after the attack and to the more than one hundred officers who were injured by the mob of insurrectionists on January 6.

It is that phrase, “mob of insurrectionists,” that purportedly gave 21 far-right House Republicans one excuse* in June to vote against legislation awarding the Congressional Gold Medal to the brave members of the Capitol Police and the Metropolitan Police Departments.

However, on Tuesday the U.S. Senate unanimously, without any amendments passed the legislation without a recorded vote, “a rarity in the polarized Congress.”

Before the Senate approved the legislation, Senate Majority Leader Charles E. Schumer (D-N.Y.) said this about the bill and the recipients, “It is the highest expression of gratitude that Congress can bestow…I cannot imagine more worthy recipients…”

And indeed, since the American Revolution, the Congressional Gold Medal has been Congress’s “highest expression of national appreciation for distinguished achievements and contributions.”

The members of the Capitol and Metropolitan Police are the 174th recipients of this venerable award.

The first Medal was awarded in 1776 by the Second Congressional Congress to General George Washington for his “’Wise and spirited conduct’ in bringing about British evacuation of Boston.”

For the next 60 years or so, the medal was awarded mainly to military members and mostly to officers.

• In 1777, to Major General Horatio Gates for “Brave and successful efforts” in bringing about the surrender of the British Army at Saratoga.

• In 1800, to Captain Thomas Truxtun for “his gallant effort during the action between the U.S. frigate Constellation and the French ship La Vengeance.”

• In 1805, to Commodore Edward Preble for “gallantry and good conduct during the War with Tripoli.”

After having awarded the Medal almost exclusively for military achievements, in the mid-19th century Congress expanded the scope of the medal to include other heroic or distinguished activities and accomplishments, starting with the 1854 award of the Medal to Frederick A. Rose, a British naval surgeon who was awarded the Congressional Gold Medal in 1858 for aiding American naval personnel aboard the USS Susquehanna who had contracted yellow fever.

• In 1854, Congress began to broaden the scope of activities that merited a Congressional Gold Medal and followed in quick succession with awards such as:

• In 1864, to Cornelius Vanderbilt for donating a steamship to the United States.

In 1867, to Cyrus W. Field for his work in the laying of the transatlantic cable.

• In the same year, to philanthropist George Peabody for his charitable contributions to the world.

• In 1874, to John Horn for “a long heroic career in which he rescued more than 100 people from drowning in the Detroit River…”

• In 1888, to Joseph Francis for inventing life-saving tools and equipment.

The 20th century saw an additional expansion of categories of recipients for the award to include pioneers in aeronautics and space, scientists, notables in medicine, public servants , diplomats and, eventually, actors, authors, artists, musicians, athletes, entertainers, civil and human rights leaders and even foreign recipients.

Other groups – small and large — have been honored with the Congressional Gold Medal.

Since then, several Medals have been awarded collectively to crews of ships, aircrews (even an entire “air armada”: The Doolittle Tokyo Raiders), participants in and veterans of battles and wars and members of regiments, battalions, and other military units for their heroic service. Also, to members of expeditions, civil rights movements and marches, veterans groups, and others.

Some of the groups I know best:

The Native American Code Talkers in 2008.

The aforementioned Doolittle Tokyo Raiders in 2014.

It goes without saying that the award of the Congressional Gold Medal to members of the Capitol Police and the Metropolitan Police Departments stands out not only because of the recentness and the unprecedented and tragic nature of the event that led to the award but also because millions of Americans watched in horror, in real time, how these heroic men and women for interminable hours – as the Senate majority Leader said — “put their lives on the line to defend this temple of democracy.”

The Department is incredibly grateful for this honor bestowed upon us by Congress. Hopefully the world will never forget the bravery of every law enforcement officer who answered the call and defended our democracy on January 6.

* In addition, the 21 Republicans objected to wording in the legislation that referred to the Capitol as the “the temple of our American Democracy.”