Posted on October 18, 2021
You are here: Home / Breaking News / Cindy McCain Betrays LGBT Americans, and Herself

It’s hard to say which is worse, but betraying her own principles (if that’s what they were) is, in my opinion at least, the most pathetic part of this:

Yesterday, Cindy McCain – the wife of US Senator John McCain – released a video in which she criticized the US government “Don’t Ask, Don’t Tell,” policy, and suggested that it gave bullies an incentive to bash gay youth, who then try to kill themselves.

Our political and religious leaders tell LGBT youth that they have no future.

They can’t serve our country openly.

What’s worse, these laws that legislate discrimination teach bullies that what they’re doing is acceptable.

Our government treats the LGBT community like second class citizens, why shouldn’t they?

Today, Cindy McCain is suddenly tweeting how pro-DADT she is (clearly, her homophobic husband, who is leading the charge on trying to filibuster the effort to repeal DADT, got to her).  Which means, of course, that by her own words she now thinks she is responsible for gay kids committing suicide.  Here is the two-faced Cindy McCain today: 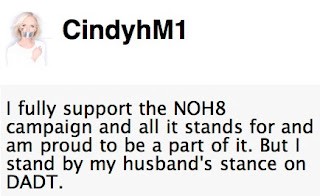 Did she lie today or lie yesterday?  Either way, she’s a liar, and she should be removed from the NOH8 video because, as of right now, Cindy McCain is a hater.  Not to mention, great message she just sent to gay youth.  If someone pressures you, cave and support hate.