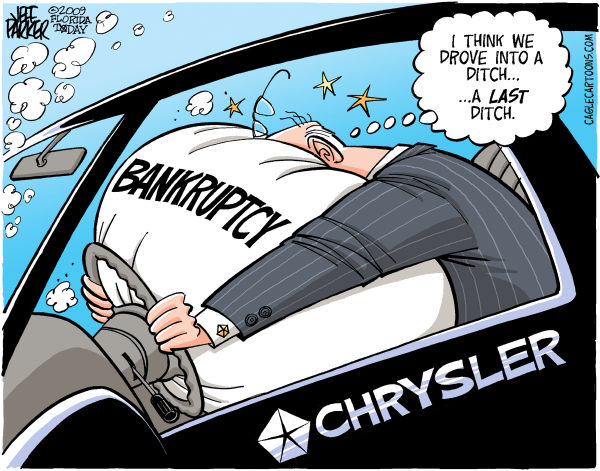 News breaking this morning that Chrysler has filed Chapter 11 bankruptcy, the first automaker to do so since 1933.

Details at this point are sketchy but it seems likely that some form of company will emerge from the process, although certainly in a very different form. The merger with Fiat does appear to be on track so that means that they will be working in the process too.

The New York Times has a primer on the process and the reports seem to suggest this will be a fairly short case, which means pretty much everyone has agreed on what is going to happen but they need to go to court to authorize everything.

Under Chapter 11 the court, in cooperation with the company and the creditors, works to restructure things to make a new company which remains viable. This will likely mean that they will be selling assets in order to raise funds, restructuring and probably canceling debt and probably making changes in payroll and benefits.

Since unions seem to be on board with the bankruptcy, my guess is that they have an agreement to minimize the cuts relating to union members, which means middle management is more likely to take a hard hit. The company will also be able to ‘fire’ any dealers who they want to (the dealers can object but the court would likely reject those objections in order to keep the case workable).

This is going to be a major event in the economy as the big hits will be taken by banks and other lenders who have given loans to the company. I’ll be interested to follow the case as it goes along and will do my best to give you my quasi-expert viewpoints on the process.

The above cartoon by Jeff Parker, Florida Today, is copyrighted and licensed to run on TMV. All Rights Reserved. Unauthorized reproduction prohibited.