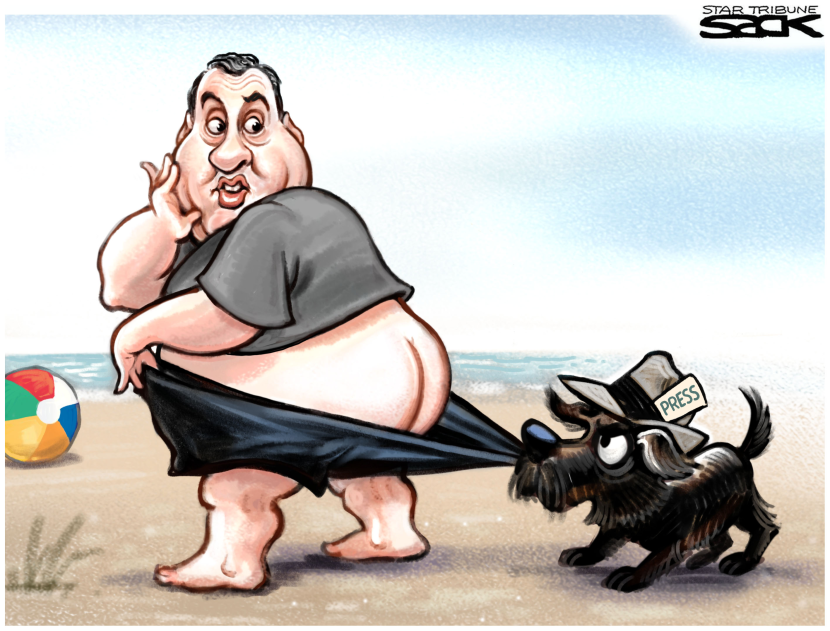 If Bill Murray were to star in a sequel to Groundhog Day, he’d wake up to the Sonny and Cher alarm clock, take the cold shower, step in the puddle, parry the insurance agent, trudge to the gazebo…and see Chris Christie doing his same old song and dance.

Didn’t this guy end his gubernatorial tenure with a 15 percent approval rating, then crash and burn as a 2016 presidential candidate? Wasn’t it Christie who morphed from Trump foe to toadying manservant, then contrive to write a spin memoir and launch a rehabilitation tour just two short years ago? Didn’t Christie hit the road with a media blitz in 2019, sort of praising Trump (“he has many of the qualities that define America’s leaders”) while sort of knocking Trump (it was a “tragedy” that he was so ill-served by his aides), in the hopes of grabbing a piece of the action?

Apparently it’s time to rinse and repeat. Christie has a new book out now about how Republicans should reboot themselves by flushing all the lying sewage of recent years and rediscover the virtues of truth. Which is fine as far as it goes.

Naturally, he thinks of himself as the 2024 nominee who can lead the party back to sanity, and you can’t blame him for salivating at the prospect. But because Christie is always trying to keep all his options open, he still can’t explain why in 2016 he endorsed the con artist most responsible for the lying sewage… or why he’s unwilling to rule out endorsing exactly the same con in 2024.

Christie still seems to think Trump is capable of being a better person. If only Trump would stop obsessing about his re-election defeat, things would be just ducky. In Christie’s words the other day, “If he wants to be a positive force in the future, he’s got to let this other stuff go.” Right. And if dog poop tasted like ice cream, it would be on dessert menus.

Christie’s game is obvious. He’s trying to stuff himself through the eye of a needle, damning Trump with faint praise and praising Trump with faint damns in order to (theoretically) woo the Republicans who are discomfited by Trump’s fascist excesses – without quite alienating the MAGAts who still march in lockstep.

I guess we should give him points for trying. But good grief, it sure gets embarrassing.

Take, for instance, what happened on MSNBC this week when he ran into the buzzsaw best known as Nicolle Wallace. As my dear departed mother would have said, “It was a scream!”

Christie’s new book laments about all the lies and disinformation that circulates in the media. But somehow, he just plumb forgot to mention the ceaseless contributions of Fox News. Wallace, the former Republican aide, decided to ask him why so-called media bias is more dangerous than conspiracy theories spouted by the likes of Tucker Carlson.

Wallace: “I don’t think it’s an intellectually honest case to make against conspiracy theorists without taking on Fox News.”

Christie: “Well, then listen, you can write that in your book.”

Wallace: “I’m not the one trying to ‘rescue’ the Republican party.”

Christie: “No, the book – you’re conflating it.”

Suffice it to say Christie’s dumbo act with respect to Tucker Carlson – who has the highest rated show on Fox News – is more than a tad disingenuous. And suffice it to say that he omitted Fox News from his book because as a perpetual Republican candidate he can ill afford to alienate fans of the infauxtainment network. His whole shtick is quite tiresome.

Only fans of The Sopranos will get this closing reference, but so be it: I wish Bobby Bacala would just go away and play with his trains.

Cited by the Columbia Journalism Review website as one of the nation’s top political scribes, and by ABC News’ online political tip sheet as “one of the finest political journalists of his generation, ” Dick Polman is the national political columnist at Philadlephia NPR affiliate WHYY, and has covered or chronicled every presidential campaign since 1988.

A Philadelphia resident, Dick roamed the country for most of his 22 years at The Philadelphia Inquirer. He has been blogging daily since 2006. He’s currently on the full-time faculty at the University of Pennsylvania, as “Writer in Residence.” He has been a frequent guest on C-SPAN, CNN, MSNBC, the BBC, and various NPR shows – most notably Philadelphia’s “Radio Times” on WHYY-FM.