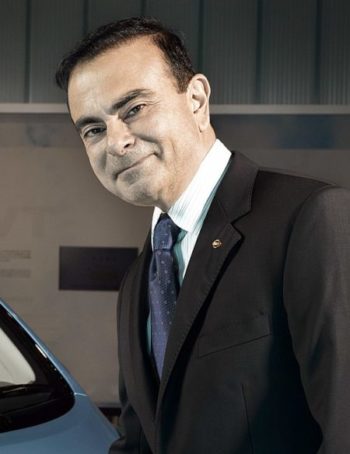 This is a fast breaking story that’s almost impossible not to be thrilled by. It’s the story of a 65 year old superman-executive, a titan of industry whose humble beginnings, spectacular rise to success and subsequent downfall, followed by his dead-of-night sneaky flight from Japanese justice is the stuff of exciting movies with…..let’s cast….Mat Damon? Tom Cruise?

Carlos Ghosn (pronounced: “gone”, ironically) was born in Brazil and has three nationalities: the land of his ancestors and parents, Lebanon, Brazil, and France where he lived as a young man. Like many Lebanese his Maronite Christian parents left Lebanon to find their fortune abroad. Lebanese will do anything for their country except actually live there and people have been its greatest export: to Australia, the US, West Africa, France and South America. They’re famously resourceful, skilled at business and tend to improve the neighborhoods of the countries they emigrate to. In some West African states they are the business community.

Cut to 20 years ago: after a number of high profile positions in the auto industry, he – as a “gaijn” (foreigner) and non-fluent speaker of Japanese – ascended to the position of CEO of Nissan Motors whose failing fortunes at the time he managed to turn around spectacularly. He cut costs, restructured, raised the share price and was so famous there they made a manga comic out of his story. His arched eyebrows and serious demeanor made him a CEO almost from central casting. They called him Mr. Fix it.

Then he got arrested. There are two competing stories about the events leading to his arrest. One is that he was “set up” by the (Japanese) corporate insiders at Nissan in some kind of “palace coup” and then railroaded by racist prosecutors.

Another narrative is that, as a narcissist (and he displays many of the clinical symptoms) who felt his “brilliance” was unrewarded he was a cheat. While it is true that he was paid less than his big motor dude counterparts in Germany and especially in overpaid Detroit, USA, Japan isn’t known for sky high CEO salaries and his pay was in line with Japanese CEOs generally. But he wanted more! and allegedly engaged in a series of tax dodges and sleazy transactions, embezzling millions in conspiracies with friends in Saudi Arabia and Oman.

So he’s guilty or innocent, right? Be that as it may he was arrested in November, 2018, and was facing fifteen years in a Japanese prison, a terrifying prospect for a fussy, soft 64 year old gaijin narcissist. He has many flashy homes around the world, got married for the second time on the company dime (for which he’s being investigated by French authorities) at the actual Palace of Versailles near Paris and the paper trail of his tricky financing or perhaps embezzlement is certainly highly suspicious. “The rules don’t apply to me!” is classic Narcissistic Personality Disorder, as is “The world doesn’t recognize my genius and special status” .

So he was charged with various white collar and tax crimes, jailed for six months and then (very, very unusual in Japan) was granted bail to live at home, possibly because the massive media attention would have made the Japanese justice system look cruel otherwise.

Japan’s justice system is indeed kinda unfairly weighted towards police and prosecutors and its prisons, while hygienic and not physically brutal, are incredibly strict and sparse. Punishment in Japan is punishment. Their justice system has been open to various legitimate criticisms, sometimes surprisingly, by the United States, which imprisons more of its citizens than any other country, many for imaginary crimes like drug possession and driving while black. Additionally, Japan is a nation with very little crime and an extremely low level of violence so opinions can differ as to the fairness verses efficacy of the Japanese system.

The bizarre wrinkle in reality – and the fast breaking news story that has several nations entertained at once is that this week, while on parole with an ankle bracelet in his luxury apartment in the tony Hiroo suburb of Tokyo, Carlos Ghosn absconded. He illegally fled Japan – a tricky maneuver for anybody, let alone a nationally famous gaijin.

Its a fantastic mystery: His passports – all of them – are (still) in the possession of his lawyers so somehow, without a passport (or, in a shady arrangement with a new, bogus one), he escaped Japan in a private jet and turned up, via Turkey, in Lebanon.

There are reports, one in the Guardian, that he escaped by hiding his small frame in a musical instrument case owned by a band performing in his large penthouse, despite round the clock surveillance by the usually un-sloppy Tokyo police. The New Year’s Eve holiday is the biggest in the Japanese calendar so he picked his timing suspiciously well. Additionally, most bands playing at private functions don’t expect the customer to ask/demand/pay for the opportunity hide in their musical freight equipment – then ask to be taken to an airport. It is abnormal to say the least.

Japan probably won’t demand his extradition, no matter how outraged the prosecutors are in Tokyo. You’d need powerful computers to construct a ruder, more disrespectful insult to the staid and conservative world of Japanese law. Lebanon, however, is a highly sectarian, tribal society where corruption is as common as sunny skies and public trust in government so thin that there have been riots and protests there continuously for the past few months. After a hideous 1970s and 1980s civil war, and with the burden of a million Syrian refugees lately, Lebanon, with its bad economy and few exports, is a particularly strained nation.

Japan and Lebanon have no extradition treaty. Further, tribal societies where blood ties bind and the rule of law is flimsy don’t “do” extraditions for legal reasons so the smart money says Carlos is safe and sound in his new-ish home in Beirut ($15M home, allegedly paid for by company funds, along with his $5M Rio de Janeiro, Paris and Amsterdam pads.

He bought the pricey Beirut house several years ago and although he speaks fluent Arabic (and French, English, Portuguese and some Japanese) and his family is from there, he hasn’t’ lived in Lebanon since his younger years when, presumably, he was plotting a world take-over.

His current shelter in Lebanon will be no doubt way more comfortable than the scary, huge, cold Tokyo Detention Center visited by your correspondent once.

Whichever accommodation he deserves will be the question decided in the future although, almost reflexively, he’s a hero to the Lebanese, a cheating scoundrel to the Japanese and a fly in the ointment of “gaijin” foreigner legal rights. His claim is that he’s not fleeing justice as a fugitive but rather escaping a racist and rigged system. It’s hard to know which of those narratives is true. James Bond (or James Bond villain?) – eat your heart out!

David Anderson is an Australian-American attorney and writer in New York City. He graduated from St. John’s University School of Law in 2002 and studied Japanese law at Seikei University in Tokyo. He speaks and reads Japanese.