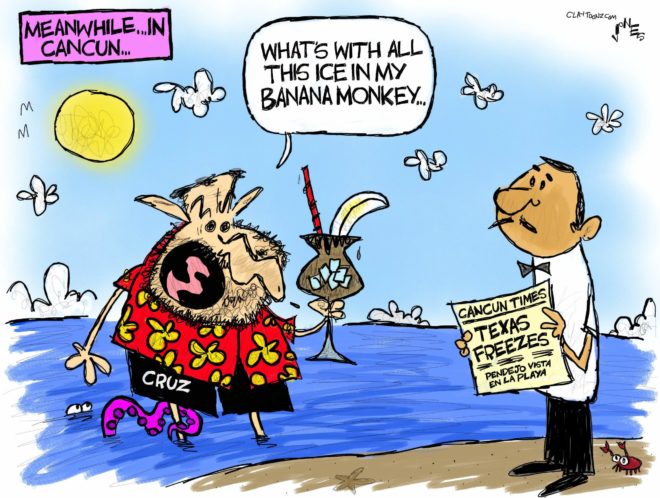 Now, before you get upset and infuriated with Ted Cruz for going on a sunny vacation with his family in Cancun (in case you’re a Republican, that’s in Mexico), keep in mind, he’s a goon. Additionally, he’s a slimy shady disingenuous weasel who is as fake as they come. He just hasn’t received the memo yet.

And, what’s with these goons hate-mongering on immigrants from Mexico taking vacations in Mexico? They’re not good enough to come to our country but he’s good enough to go to theirs? I expect some politician in Mexico to run for president on the campaign of building a wall to keep Ted Cruz out. I would get a really tall ladder, climb over the wall, illegally immigrate to Mexico, then illegally vote in that nation’s election to help that guy win.

Anyway, while Texas is freezing and up to four million of his constituents have been without power with some people dying, Ted has been in Cancun where it’s nice and warm. The biggest danger Ted has from the cold in Cancun is getting a brain freeze from his banana monkey.

You might think, “Well it’s not his fault this happened while he was on vacation, and you, cartoon boy, are not being fair.” But it didn’t happen while he was in Cancun. It didn’t even happen while he was in line at the airport. The freeze happened a couple of days before he left. Also, let’s not forget we’re in a pandemic and we’re trying to be responsible and discourage all travel except for the most important of reasons…not because Ted wants to sip a banana monkey on the beach (I just looked that drink up today, by the way. It looks delicious and I’m willing to try it as long as it doesn’t actually contain bits of real monkeys).

Ted was elected to represent every single person in the state of Texas. So while it’s going through a natural disaster, perhaps he should actually be in Texas. Not in Washington, D.C. and definitely not out of the country on a tropical vacation.

And what has the guy Texas chose Cruz over been doing during this freeze? Beto O’Rourke has been part of a group that has called over 150,000 people, getting them to warming centers, and making sure they have food. Ted? He’s trying to recover from getting caught vacationing during a natural disaster freezing his state. While everyone else’s have been freezing, Ted’ cojones have been warm and snugly (sorry I put the image of Ted Cruz’s hot and sweaty cojones in your brain).

Ted Cruz is ignoring the worst thing to happen to Texas since it elected Ted Cruz.

Naturally, after being caught, Ted is on the first flight out of Cancun…to the Bahamas. Just kidding. He’s going back to Texas. Don’t you just love that he wants to do his job AFTER everybody catches him? And, his excuse? He blamed his daughters.

These are the same daughters he used in a political ad (reading a script attacking Hillary Clinton), then got all indignant and accused those who criticized it of inserting his daughters into politics. He used an Ann Telnaes cartoon of it (she’s brilliant) in a fundraising letter.

Ted issued a statement explaining his daughters wanted to take a trip with friends, what with school canceled and all. Uh, and did Ted check to see why school was canceled? So, Ted’s poor daughters were all like “Please, father, let us go to Cancun during a pandemic.” And Ted, seeing that his children had suffered immensely from being forced to be the stars of his 2016 anti-Hillary ad, decided his girls needed to go to Cancun. And a great coincidence happened in that the girls’ friends picked out a resort that Ted and the family have stayed in before. But, Ted never intended to stay during this vacation. It was always his plan to fly to Cancun with the wife and the girls to make sure they settled in OK, and then after spending one evening in Cancun, fly to Houston to help save his constituents from freezing or having to crawl inside a tauntaun.

I call b.s. and I’m going to call b.s. again as soon as the photos come out of his staged photo-ops him pretending to help people. These pictures will be almost as genuine and believable as those photos of Melania gardening in a dress and high heels. Maybe Ted will wear high heels…and this time, he’ll be the hoe.