Posted on January 20, 2021
You are here: Home / Featured / Build Your Own Cabinet. A President’s Cabinet, That Is.

[Caution: This post contains some humble bragging and self-effacing satire.]

Other titles considered for this piece:

“Even a Dummy Has Bragging Rights.”

In the wake of the presidential election, there has been a lot of criticism of and soul searching by the pollsters, pundits, political analysts — “the experts” — about how wrong they got the results of the election.

It turns out, however, that one does not have to be an expert, a Nate Silver or even have a (Sabato’s) Crystal Ball to guess it right.

All one needs is the “back of an envelope,” some basic assumptions, some simple math and, above all, some dumb luck.

In an updated “back-of-the-envelope calculation” on November 2, this author predicted that of the total popular vote (estimated at 152.5 million), Biden would receive 79.1 million votes and Trump 73.4 million votes, for a margin of 5.7 million votes in favor of Biden.

Lo and behold, as of the time of this writing (November 16), with 97% of the popular vote in, CNN’s tally is as follows (See screen capture below): 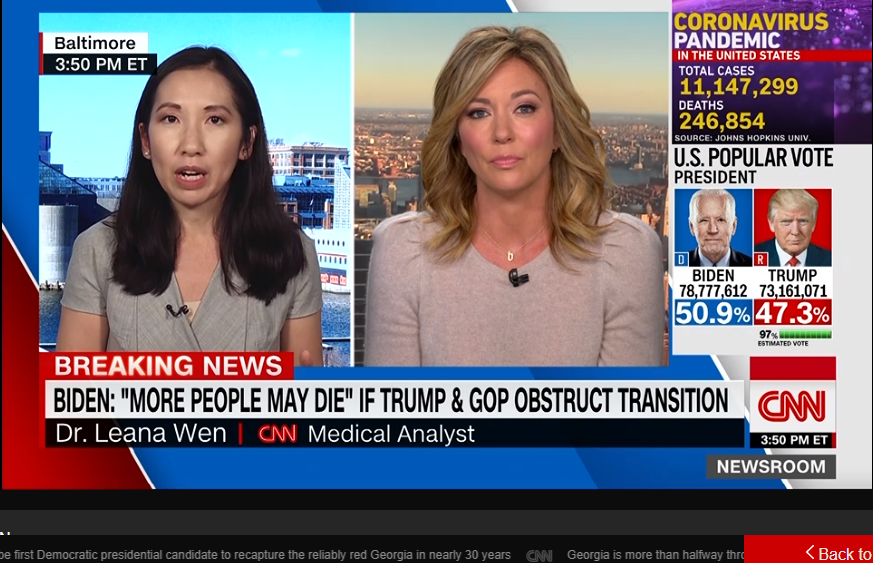 As the rest of the final vote comes in, the numbers may get even closer to those predicted, or then again…

But these are close enough to claim bragging rights, at least for what may be a fleeting moment.

Predicting the electoral vote, however, was a bridge too far even for this “now-seasoned” analyst. But at 306 to 232 electoral votes in favor of Biden, it is the exact margin of victory Trump reaped in 2016. A result that Trump then coined “a massive landslide.” Now that the landslide is about to bury him, Trump continues to claim the vote is rigged and refuses to concede.

In the next few weeks, president-elect Joe Biden will be naming his team – his cabinet.

Men and women who will help him guide our nation back to unity, to normality, to defeating the virus, to rebuilding the economy, to true law and order, to having respect for the Constitution and receiving respect from the rest of the world – to “restore the soul of the nation.”

It is expected that a Biden cabinet will be “diverse” in terms of gender, race and ethnicity, even political backgrounds — reflecting the real America.

In an op-ed article in June, Biden wrote:

Across the board — from our classrooms to our courtrooms to the president’s cabinet — we have to make sure that our leadership and our institutions actually look like America.

With the popular vote success in mind, why not push one’s luck and predict the makeup of the new president’s cabinet.

The following are this author’s picks based on “gut feeling” and all other synonyms for that perception: instinct, clairvoyance, divination… In other words, just plain, hard guesswork:

The reader may notice the high number of sitting Democratic Senators on the list.

• Not all of them might be replaced in the Senate by members of their own party.

• It would siphon a lot of Democratic (and democratic) expertise and experience from a body of government where such will be needed more than ever.

• Some Senators may have a difficult time receiving confirmation in a Republican-controlled Senate.

In those cases where a sitting Senator is being considered for a Cabinet post, I have hedged my bets and added (*asterisked) a second choice.

Now, put on your cabinet-maker hat and show us your “design.”

Here are some lists of possible contenders as seen by POLITICO, CNN, Foreign Policy and the New York Times.