Fiscal stimulus fuels U.S. economy in 2021 to its best performance since 1984

Stephen Breyer is set to retire – should his replacement on the Supreme Court have a term limit?

Posted on January 21, 2022
You are here: Home / African-Americans / Book Review: ‘The Secret Token: Myth, Obsession, and the Search for the Lost Colony of Roanoke’ (UPDATED) 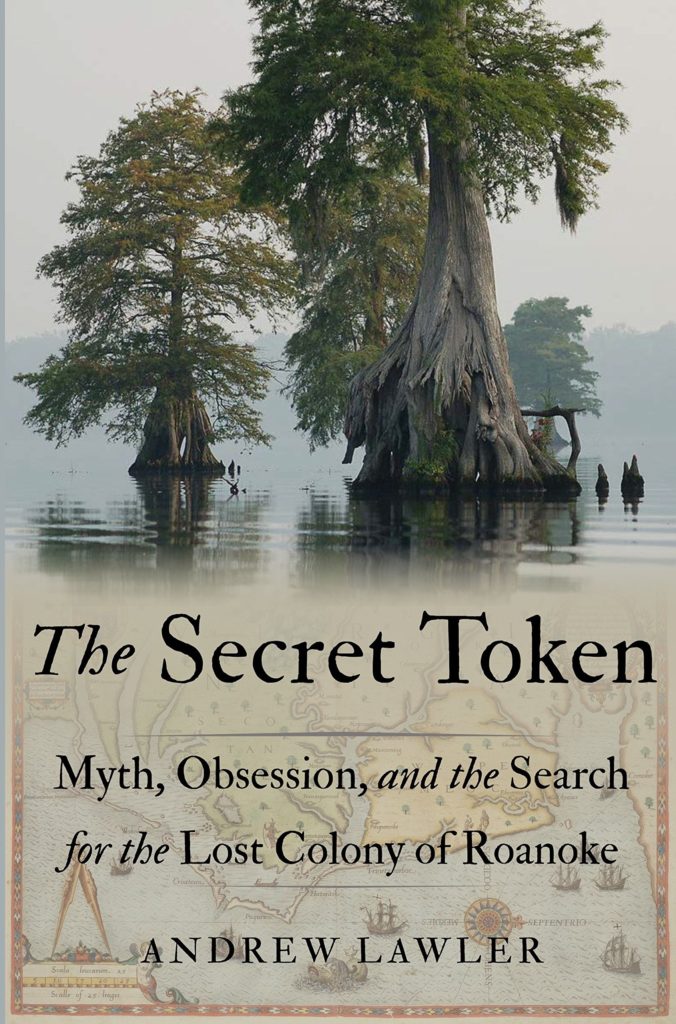 I hope some of our readers have had the chance to read the great book, The Secret Token: Myth, Obsession, and the Search for the Lost Colony of Roanoke, reviewed below back in May.

The review ends with the question, “Does Lawler solve the ultimate mystery of the Lost Colony, ‘the most enduring riddle of American history.’”? And with the (non-) answer, “The reader will decide.”

Mindful of those who have not yet read the book and perhaps intend to do so, I will still not reveal the answer to:

The question of what happened to the Roanoke settlers has haunted Americans for more than four hundred years. Were they kidnapped or killed by Indians? Did they move elsewhere? Did they try to sail back to England in makeshift boats, only to perish during the crossing? Did they peacefully assimilate with surrounding Native Americans?

However, time, research and investigation do not stand still or wait.

Scott Dawson, in a new book, The Lost Colony and Hatteras Island, published in June, claims to have found the answer. Please read about the book HERE.

A few months ago, a visiting friend – himself an author, historian and retired professor of history from Appalachian State University in Boone, North Carolina – left a book for me to read.

Because I was reading other books (I am a slow reader), because I had “more important things to do,” blah blah blah, the book sat unread until a few days ago.

Once I started reading it, I could not put it down and finished the more than 400 page book in what must be warp speed for a slow reader.

But enough about my reading prowess.

The book, The Secret Token: Myth, Obsession, and the Search for the Lost Colony of Roanoke, by Andrew Lawler (a journalist and now a national bestseller author), was published nearly two years ago.

Numerous excellent reviews have been written on The Secret Token since then.

At the risk of being redundant, for sure belated, here is a quick take on this must-read book, followed by excerpts from a few first-rate reviews.

In July 1587, a small British fleet led by the ship Lion dropped anchor at Roanoke Island (part of today’s North Carolina). With it arrived 115 men, women, and children aspiring to establish what was hoped to be England’s first permanent settlement in the New World.

Among the colonists were John White, leader of the new colony, his daughter Eleanor and her husband Ananias Dare. A mere few weeks after landfall, Eleanor gave birth to a baby girl. She was named Virginia. The governor’s granddaughter was the first English child born in the New World.

Virginia Dare has been imagined and depicted as a beautiful, blue-eyed, blonde-haired, “virginal” young woman — an “American Artemis” — in legends, oral histories, books, poems, plays, etc. She has been “both a symbol of female power as well as an archetype of white supremacy.” As such, Virginia Dare has become an icon, a “Saint,” a “Goddess,” for sure an enduring and inextricable part of both the history and the myth surrounding the Lost Colony of Roanoke, to be embraced by various causes and movements.

Soon, the colony’s leader, elected Governor by the colonists, is forced to return to England on what was supposed to be a six-month resupply mission.

Three years later, after several disasters and mishaps, White finally returns to Roanoke only to find “the houses dismantled and the settlement enclosed with ‘a high palisade of great trees.’”

But they find something else: The letters C R O carved into a tree and, at the palisade at eye-height on one of those posts, “in fair capital letters was graven CROATOAN…”

“The word, as well as the three letters, referred to the island fifty miles to the south as well as the Algonquian-speaking tribe allied with the English who lived there.” Was this their destination?

Missing, however, from the prearranged code (the “secret token”) is any sign of a cross over the word or letters, which would have meant “that they left in an emergency.”

Joyful to have found “a certain token of [the colonists’] safe being at Croatoan,” White is anxious to continue the search. However, a storm and other mishaps force White to abandon the search and return to England.

“[White] never found his daughter or laid eyes on his granddaughter again. They and the entire colony for which he was responsible, vanished from history.”

But the Lost Colony did not vanish from the consciousness, memories and imagination of historians, researchers, archaeologists, sleuths, hoaxers, millions of people and authors like Andrew Lawler.

The question of what happened to the Roanoke settlers has haunted Americans for more than four hundred years. Were they kidnapped or killed by Indians? Did they move elsewhere? Did they try to sail back to England in makeshift boats, only to perish during the crossing? Did they peacefully assimilate with surrounding Native Americans?

In The Secret Token, Lawler doggedly, brilliantly and factually addresses each one of these theories, and more.

Also, Lawler unabashedly dives into the clashes between Native American, European and African cultures, races, identity and religions. Clashes that reached various boiling points throughout the 400 plus years after the Roanoke landing. Nor is he reluctant to delve into darker topics and issues such as eugenics, racial and genetic superiority and taboos of the time — and for a long time thereafter — such as interracial marriage and intimacy.

Finally, there is a thoughtful and timely discussion of identity, prejudice and tolerance. Issues that are still with us today.

In a Washington Post review of “The Secret Token“almost two years ago, Gregory S. Schneider writes, “But the themes of mingled races, of cultures clashing to create something new, are surprisingly fresh and powerful. The issues raised by the Lost Colony are still playing out. It’s a mystery in which all Americans have a stake.”

Here are excerpts from a few more reviews:

.
“…Thrilling and absorbing, The Secret Token unravels the enigma of the lost settlers and offers a new understanding not just of the first English settlement in the New World but of how its disappearance continues to define–and divide–America.”
—The Publisher

“The Secret Token, spanning more than 400 years, offers the most authoritative account of the Lost Colony to date…[Lawler] recounts his arduous travels with clarity and insight.”
—Wall Street Journal

“Andrew Lawler, an award-winning journalist and author, sheds new light on the colony and—equally fascinating—on the myths that have grown up around the mystery and their importance in the national story that Americans tell ourselves.”
—Greensboro News and Record

Does Lawler solve the ultimate mystery of the Lost Colony, “the most enduring riddle of American history”? The reader will decide. But, for sure, the book offers the reader, as Lawler explains, “…the American creation story…the story about how we became who we are…where our national DNA formed.”

With apologies to our good friend, John Alexander Williams, who left the book for me to read several months ago, and with thanks for his forbearance.