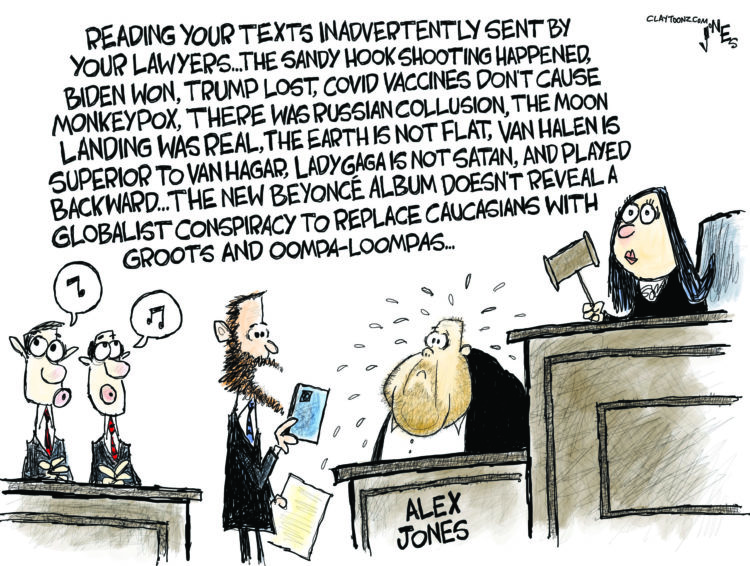 Alex Jones is a conspiracy theorist as it’s his business. He knows the b.s. he’s spreading is fake. Conspiracy theories are his business but lying is his nature. He’s also not intelligent enough to get away with it. Yesterday, Alex Jones was busted during cross-examination of not just being a liar, but of withholding evidence. And, the revelations came from his own legal team. Oopsies.

Jones (no relation to yours truly) is currently defending himself from defamation lawsuits brought by the families for lies he had spread about the 2012 school shooting. For years, he’s been telling lies that the shootings never happened. From his conspiracy theories of the government turning frogs gay to COVID vaccines creating Monkeypox to Lady Gaga performing a Satanic ritual during the Super Bowl halftime show, this one about Sandy Hook may be the most hurtful. The problem is, there are people who believe it.

Jones did not create the Pizzagate conspiracy theory that Hillary Clinton and other Democrats were operating a Satanic sex trafficking ring of babies from the basement of a Washington, D.C. pizza parlor, but he promoted it on his show. The man who showed up and shot an assault rifle into the pizza parlor over this story was a big fan of InfoWars, Alex Jones’ platform.

When the pizza shooting happened, Alex Jones backtracked and issued a public statement that Pizzagate wasn’t real, even though he was one of its biggest advocates. Yesterday, faced with evidence he’s a liar, he backtracked on his Sandy Hook lies.

He helped Donald Trump and Steve Bannon engineer the turnout for the January 6 attack on the Capitol. He promoted the Big Lie that Donald Trump won the election. On that January 6, 2021, he was at the Capitol. He used a bullhorn to direct the crowd of Trump terrorists. He told them which doors to go in. He was at those doors, pointing them out to the angry crowd. Once they started breaking, he ran off faster than you can say “Josh Hawley” and assumed a broadcast position overlooking the terrorist attack from where he blamed…you’re gonna love this…Antifa.

Alex Jones is a big fat sweaty liar. He can’t even own his own b.s.. He can’t take responsibility for his actions. It’s starting to look like he’s about to.

In testimony on Tuesday and Wednesday morning, Jones continued to insist that he had complied with court orders to produce documents and testimony in the run-up to the defamation trials. In fact, his losses by default in four other defamation cases resulted from his failure to produce those materials.

During cross-examination yesterday, the lawyer for the Sandy Hook families said to Jones, “Mr. Jones, did you know that 12 days ago, your attorneys messed up and sent me an entire digital copy of your entire cellphone with every text message you’ve sent for the past two years?”

This is important because Jones had claimed for years that he had searched his phone for texts about the Sandy Hook cases and found none. Oops.

The lawyer, Mark Bankston, then asked, “You know what perjury is, right?” If he doesn’t, he’s about to find out.

Bankston also presented financial records that contradicted Jones’s claim under oath on Tuesday that he was bankrupt. The lawyer produced financial records indicating that Jones was earning as much as $800,000 per day in recent years by selling diet supplements, gun paraphernalia, and survivalist gear in ads accompanying his broadcasts.

Did I mention Jones was stupid?

Another InfoWars broadcast show in court falsely linked the judge to pedophilia and human trafficking and claimed Jones’ political enemies had handpicked “blue-collar” people who “don’t know what planet they’re on” and are ill-equipped to decide what monetary damages he must pay to serve on the jury.

Now, Jones is going to be paying out his Pinocchio nose to the families. But it gets worse. It gets so so much worse.

Bankston estimated that the files relayed to him in a major flub by Jones’ lawyers contained several hundred gigabytes of material. Golly-gee wilikers. I wonder who else might want to see those text messages? Perhaps the January 6 Committee investigating the Trump white nationalist terrorist attack? Maybe the Justice Department, that’s also investigating the white nationalist terrorist attack. Here comes that word again. Oopsie.

Another fun detail: Jones’ lawyers did NOT challenge the evidence they accidentally sent. How are these lawyers going to remain in business after this? Will they change their names? Maybe “Lionel Hutz” is available.

It was fun to watch Jones visibly uncomfortable for most of the 40-minute cross-examination, sweat running into his eyes and down his neck, saying he believed “100 percent” that the shooting occurred.

I’m going to enjoy the hell out of Alex Jones going to prison.