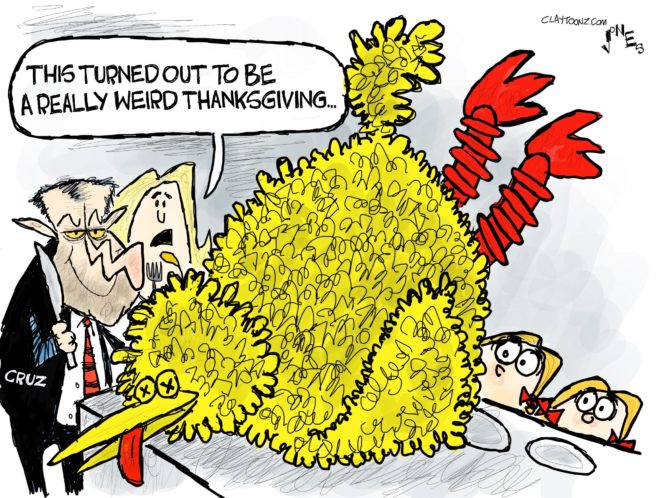 Senator and above-ground CHUD Ted Cruz has now attacked Big Bird for assuring children they don’t have to be afraid of the vaccines for the coronavirus.

After American six-year-olds, became eligible for the Pfizer-BioNTech coronavirus vaccine last week, Big Bird did a public service announcement to comfort children and to promote vaccine awareness. Big Bird got his vaccination and tweeted, “My wing is feeling a little sore, but it’ll give my body an extra protective boost that keeps me and others healthy.”

President Biden replied to Big Bird and tweeted, “Good on ya’, Big Bird. Getting vaccinated is the best way to keep your whole neighborhood safe.”

This is just a lot of fun while being also educational about the vaccine. This PSA can actually save lives and help us defeat the pandemic. Enter Ted Cruz.

Ted Cruz is worse than Philadelphia Eagles fans who once booed Santa Claus. Ted Cruz went after Big Bird. Ted tweeted, “Government propaganda … for your 5-year-old!” No, you idiot. It’s for six-year-olds. Maybe we need to do another PSA just for Republican senators. Didn’t a Republican win an election last week by claiming he’s the “education candidate?”

Ted later sent out another Big Bird-hater tweet with a video of him kicking a door in. Nice. I thought Ted Cruz approved of the Gestapo.

A couple weeks ago, Ted Cruz defended people giving the Heil salute. You know who gives that salute. Nazis. Ted Cruz defends Nazis and attacks Big Bird. But what else would you expect from a guy who worships a cult figure who called his wife, Heidi, “ugly.”

Because Republicans are in a race to prove who can be the vilest, Lisa Boothe, a Fox News contributor I have never heard of before, tweeted, “Brainwashing children who are not at risk from covid” was “twisted.” I don’t know why she used three quotation marks. I quote them without editing their fuckups. Maybe we need a PSA for Fox News contributors.

Tennessee Republican congressional candidate Robby Starbuck suggested that Big Bird could die from the vaccine. “*7 days later* Big blood clot Bird is served!” It’s fun to go after a beloved character from a children’s program and spread disinformation. It’s fun to tell children, “Big Bird’s going to die!!!!” Starbucks should sue to force him to change his name. Nazi-lovers sharing your name is not good for business. Nobody except Republicans would buy from Nazi Starbucks.

This is not the first time the government has used public figures, real and imaginary, to advocate for vaccines. In the past, vaccinations were advocated in PSAs by Elvis, Muhammad Ali, C3PO, RD-D2, and even Big Bird back in the 70s. I’m not aware of conservatives being upset back then, though they did like attacking Muhammad Ali, you know, because he’s black and they couldn’t ever find a white guy who could beat him up. Personally, I’d like to see Ted Cruz go ten rounds with Big Bird. My money’s on the bird.

This isn’t the first time Republicans have called for the head of Big Bird. In 2012, while saying he loved Big Bird during a presidential debate with President Obama, Mitt Romney promised to kill Big Bird. During the Trump administration, the orange one tried to kill the yellow one every year he was in office. Again, the education candidates want to kill education. Trump’s Education Secretary, whose ideas for public education are being copied by Virginia’s new governor-elect, was worried about children being attacked in public schools by bears and Big Bird. I mean, Ted Cruz has already told us Big Bird can kick down doors. Elmo’s probably an evil samurai. The Count probably counted illegal votes for Biden. And a one, ah ah ah. And Oscar the Grouch? He’s grouchy and lives in garbage, so they probably love him.

So many people voted for Glenn Youngkin last week over frustration that schools were closed and their kids had to be taught at home. Yet, Republicans are attacking vaccinating kids, which will help keep schools open. Do we need another PSA?

I think there should be a public service announcement with Santa Claus, that way we can Ted Cruz starting a fight with Santa.

There should also be public service announcements stating:
Don’t watch Fox News.
Trump lost.
Republicans are liars.
There are no public schools in this nation teaching Critical Race Theory.
Ted Cruz is the Zodiac Killer.

Why are Republicans constantly trying to make this nation a worse place? I really do wish Big Bird would kick Ted Cruz’s ass.