Posted on May 13, 2022
You are here: Home / Breaking News / Biden’s legacy is at stake in dangerous dispute with Russia over Ukraine 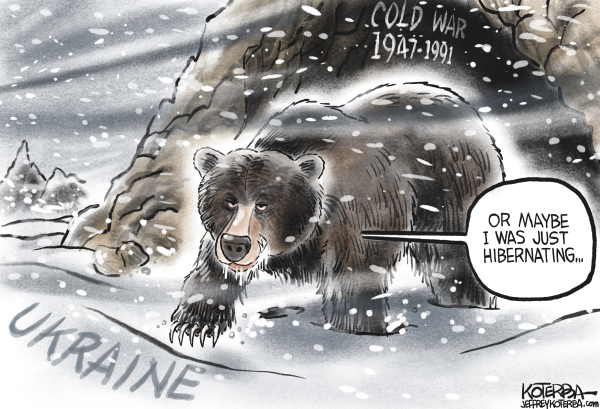 The utter incomprehension paralyzing talks between America and Russia about Ukraine and the still expanding US-led NATO alliance in Europe is pushing President Joe Biden into a confrontation that could damage his foreign affairs legacy.

Seen from afar outside America and Europe, Biden’s chief legacy, if current positions do not change substantially, could at best be a new Cold War with Russia.

At worst, it could lead to another war in Europe, which has already visited upon humankind the two most horrific wars ever, the First and Second World Wars of the 20th century’s first half. They also killed millions of non-Europeans and led to an unprecedented Holocaust of innocent Jews and attempted genocide of gypsies and homosexuals.

American politicians and think tanks counseling intransigence to Biden to deter Russia’s Vladimir Putin and bring him down a peg should pause to think things through.

Biden’s people seem to be treating the massing of Russian troops outside Ukraine as a cry for Biden’s attention by Putin. This is a mistake.

What Putin wants now is to ensure that the US no longer arms NATO members against Russia and will never use Ukraine, a non-NATO country, as a proxy to threaten Russian security.

NATO was created to deter and, if necessary, fight the former Soviet Union that collapsed 30 years ago and was replaced by the current Russia, which lost all the European and Eurasian member satellites of its predecessor.

Consequently, NATO lost its reason for existence but continued to expand in five phases until its new member states, earlier a part of the Soviet Union but now armed with NATO weapons, touched borders with Russia. Putin’s country no longer has a buffer zone and modern Western missiles could conceivably reach Moscow in less than 10 minutes.

NATO also conducted several military interventions far beyond its European borders, including the wars in Afghanistan and Iraq, and the bombing of Serbia and Libya. Recently, NATO chief Jens Stoltenberg said it might retool as a Western alliance faced towards China. That would mean cutting across Russia and its central Asian partners like Kazakhstan, Turkmenistan and other Stans. It might also mean a new formal or informal military alliance between Russia, if shunned by Europe, and China.

After the NATO-Russia talks, Stoltenberg admitted there is “a real risk for new armed conflict” in Europe. He will find it hard to persuade Europeans to let war enter their neighborhoods because their politicians want to protect Ukraine to honor NATO’s open door principle for anyone who wants to join.

Putin has watched in alarm so far but had to bide time until Russia became militarily powerful enough to credibly stand up to the US and Europe’s hawks. With Biden’s many difficulties in domestic politics recently, Putin made his move.

He has put Biden in a bind over Ukraine. Whatever Biden does, he runs the risk of creating divisions among his European allies, all of whom fear pushing Putin’s back too far against the wall. Even severe economic sanctions well short of war could do that.

Biden would be wise now to give legally binding assurances to Putin that NATO is not aimed against Russia. He should also agree to not arming any country for hostilities against Russia, without just cause and prior negotiations to maintain the peace. In exchange, Russia should make similar pledges.

At the same time with effective diplomacy, Biden could receive written pledges of non-aggression from Putin, leaving him freer to handle an increasingly aggressive China while Europe flourishes in peace without its traditional fear of Russia. Vast American resources would no longer be tied down to protect Grand Aunty Europe. Russia would also be pledged to stop interfering in American elections.

There is no need to change the entire security architecture of Western Europe. The need is only to reassure Russia in writing that the US-Europe military alliance is not aimed against it. Verbal promises are no longer enough.

This is no longer just a US-NATO-Russia matter. It is a global issue because billions of people around the world are also concerned if there is war of any kind in the heart of Europe directly involving four of the five UN Security Council members with veto power, nuclear weapons and late-generation cyber and conventional weapons capable of unimagined destruction.

Instead, Washington is painting Putin as an authoritarian trying to prevent a downslide in his personal power at home by distracting Russians through a show of force at Ukraine’s border. He wants to impress them by getting Biden to talk to him as an equal.

That might be partly true but it is grossly imprudent to believe that Biden can talk Putin down with threats of punishment without being ready to go to war for Ukraine. A wider conflagration between NATO’s frontline countries and Russia may be unavoidable if sparks fly in Ukraine.

Putin would not have taken the gamble of placing 100,000 soldiers and heavy weapons outside Ukraine’s borders if he were not determined to stop NATO encroaching further on Russia’s backdoor. After 30 years, he is saying enough is enough.

It is very dangerous to think that Putin is bluffing. NATO already surrounds Russia in the West. Arming Ukraine, a non-NATO member, to become a US-backed hostile neighbor to Russia along a nearly 1,300 mile land border would be imprudence of the highest order.

NATO rattled many sabers at the meeting with Russia in Brussels but none of its members including the US is willing to go to war over Ukraine.

Wendy Sherman, who headed the US delegation, repeatedly underlined NATO unity as if reassuring herself while rejecting Moscow’s red lines against NATO expansion to Ukraine. Their breach could cause Putin to send tanks into selected parts of Ukraine to fracture the country permanently by making it ungovernable.

If Putin occupies all or parts of Ukraine and the US and NATO arm rebels to push Russia out, a new Syria or Libya devastated by proxy warfare would emerge in Europe. Russia may be thwarted, even weakened, but millions would flee to Germany, Austria, France and Britain creating several unprecedented refugee crises, which are a nightmare for voters in European democracies.

NATO and the EU may not survive such chaos and could collapse from within. Towns destroyed and civilians killed would be in Europe, not America. Satisfying diehard Putin loathers in Washington may be too high a price to stay in NATO for many Europeans. Without NATO’s protection, a defenseless EU may also dismantle or wither by default.

Biden has threatened massive economic sanctions against Russia and unprecedented military aid to Ukraine to fight Russia. He has also threatened to place more US forces and more of his latest weapons in more NATO countries surrounding Russia.

But the success of those options depends on cast iron unity among NATO allies, most of whom are also members of the European Union, which is an economic entity without a unified defense system.

All of NATO’s 30 countries and the EU’s 27 countries depend almost entirely on the US for their defense and for most of their defense spending. Keeping them glued together behind a Biden plan in an intense and long confrontation with Russia short of war will be a gargantuan and very expensive task for him and his successors.

Polarized American voters may rebel against such costly adventurism against a country, which unlike the Soviet Union has never directly threatened the US. Domestic threats to democracy in the US would intensify.

That would certainly create hair-trigger tensions between Washington and Moscow and place Poland, Germany, France and the three Baltic states in immediate jeopardy because some of the best Russian weapons will face them.

They may have stood behind Sherman in the NATO-Russia meeting but are very likely to step back if Biden’s plan to confront Russia over Ukraine includes increasing the military threat to Russia from US forces in Europe.

Russia’s European neighbors have lived in proximity for centuries. They realize that Putin’s Russia is a partly market-oriented economy with the Russian Orthodox Church as its preferred state religion. As such, it is more like a European country than the atheist Soviet Union, which had erected an iron curtain to keep itself and its allies separate from the democratic and liberal West.

Yet, in Washington’s hubristic current climate of political, economic and military dissatisfactions with Russia lurks a real possibility of another major war in distant Europe.

This is not an exaggeration. Russia looks weak to some in Washington because its economy is just 10% of America and 5% of the 30 NATO allies. Its annual military spending is around $70 billion compared with a combined $1.2 trillion spending by NATO members, including more than $800 billion by the US.

But Russia’s weapons and war fighting technologies are not far behind those of the US, France, Britain, Italy and Germany, which are NATO’s main military powers. It is also formidable in asymmetrical warfare combining weapons with cyber, propaganda, espionage and other methods. Combined US and NATO forces could not defeat the ragtag Taliban in Afghanistan. Overcoming Russia will not be a lesser challenge.

Its people have a long history of shedding their blood without hesitation to successfully repel the invasions they suffered by Western powers, including Germany and France. More than 20 million Russians were killed in World War II. They are not easy to scare, deter or defeat when their homeland is at stake.

Russia shares Ukraine’s maritime border of 842 miles in the Black Sea and Azov Sea. After it annexed Crimea in 2014, NATO members enforced sharp economic sanctions and subsequently conducted exhibitions of military power through overflights and warship exercises close to Russia.

Now, any intense violence along Russia/Ukraine borders could light a tinderbox along NATO’s frontiers with Russia, especially if Biden places new weapons there expecting to intimidate Moscow.