BIDEN WILL WIN DEMOCRATIC NOMINATION, IF ONLY BY DEFAULT 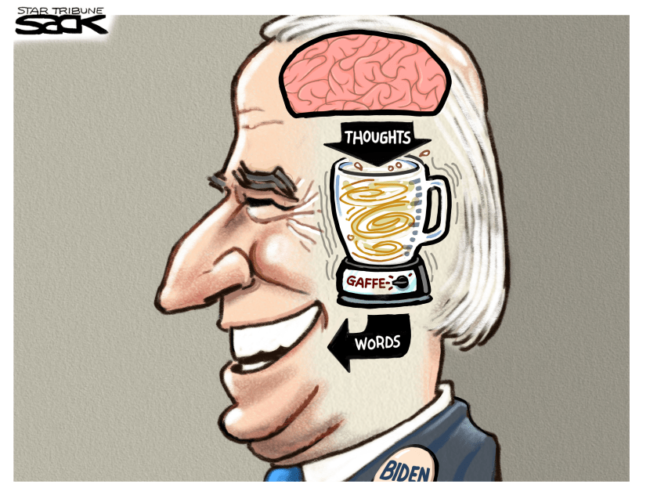 Joe Biden is going to win the Democratic nomination for president. I wouldn’t run to your bookie with this information. My track record is spotty, at best. But I’ll be shocked if I’m wrong and I’ll have plenty of company, including many Democrats.

I don’t believe Biden is going to win because he’s putting together a great campaign or because he has the best ideas. In fact, if I were advising the former vice president, I would tell him to take some time off. Don’t do anything or say anything. Just kind of disappear for a while. The nomination is in the bag.

Biden will win because Democrats, in their collective heart of hearts, believe he’s the only one who can beat President Donald Trump.

Sure, there will be a few more gaffes on the way to the nomination, and he might think he’s in Detroit when he’s actually in San Antonio, but that only makes him more kindly and relatable – an absent-minded uncle who pulls a silver dollar out of your ear.

If there is such a thing as a moderate Democrat these days, Biden is it. His positions on various hot-button issues, such as capital punishment and abortion have moved to the left over the years, but he has not endorsed a “Medicare for all” plan that his Democratic challengers are championing. He’s supported the “spirit” of the Green New Deal, if not the actual proposal, which left many climate activists wondering where he stands. Biden has a plan of his own, which includes elimination carbon emissions by 2050.

Erich Pica, president of Friends of the Earth Action, told the Associated Press in June that Biden’s commitment to climate change is “somewhat anemic.”

Well played, Joe. A solid, C-plus, right in the meaty part of the curve.

Biden is playing to the middle, at least compared to other candidates like Sen. Elizabeth Warren (D-Mass), who has a variety of crazy schemes which include eliminating private health insurance, free college for all, eliminating the Electoral College and a $52 trillion Medicare-for-all plan which, she says will not necessitate raising taxes on the middle class. This, of course, is a lie. There aren’t enough rich people in this country to pay for Warren’s Golden Corral, all-you-can-eat, entitlement buffet.

The media love Warren but they also loved Hillary Clinton. They’re just bored with Biden. He doesn’t move the needle much either way. He’s neither particularly inspiring nor overtly offensive. And this is why he’s going to win the nomination.

While a recent Monmouth University poll showed Biden and Warren in a virtual dead heat, a Fox News poll of likely Democratic primary voters revealed 68 percent believe that Biden can defeat Trump, compared to 57 for Warren.

But here’s some news that should give Democrats the heebiest of jeebies; according to a New York Times/Sienna College survey, Trump trails Biden but leads Warren in the battleground states that will ultimately decide the election.

Think about that for a second. Looming impeachment, low approval ratings, unrelenting attacks from a media that can’t stand him and still, Trump is competitive in swing states. Considering that the Democrats are actively involved in a primary and Trump really hasn’t started campaigning yet, Democrats should be worried.

If they want to give Trump a gift, they should nominate Warren.

To be sure, there are many progressives who believe Biden is too moderate, too centrist, and that he does nothing to energize younger voters. His nomination, they say, would lead to a repeat of 2016.

Biden is, indeed, the safe, establishment candidate. You might argue that so was Hillary Clinton. But she had baggage Biden doesn’t – too many people just didn’t like her. Warren has likeability issues as well, along with an extreme agenda. Will moderate, blue-collar, union-member voters in states like Michigan and Wisconsin vote for Warren? For what it’s worth, the Times survey says “no.”

Of course, the Democratic party will eventually support whichever candidate starts winning primaries and will jettison the others, much like the crew of the Star Trek Enterprise jettisoned Mr. Spock in Wrath of Khan.

But for Democrats who believe in an alternative to tepid, “middle-class Joe,” I leave you with the words of Spock himself:

“It is curious how often you humans manage to obtain that which you do not want.”

Copyright 2019 Rich Manieri, distributed by Cagle Cartoons newspaper syndicate. Rich Manieri is a Philadelphia-born journalist and author. He is currently a professor of journalism at Asbury University in Kentucky. His book, “We Burn on Friday: A Memoir of My Father and Me” is available at amazon.com. You can reach him at [email protected]