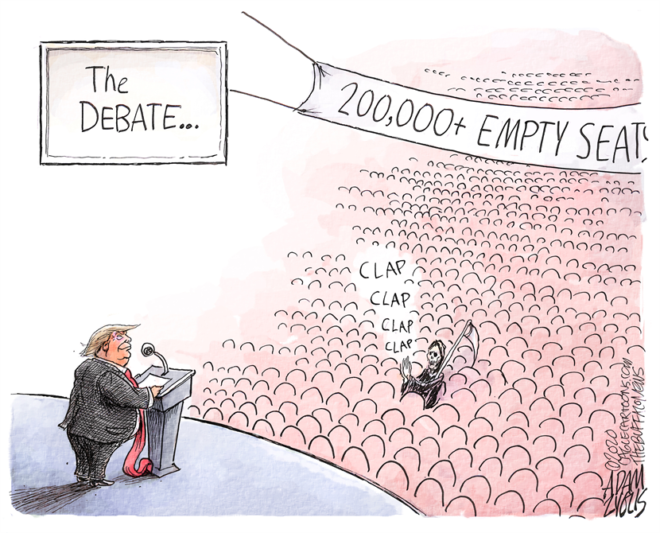 When I was a kid, I went to the zoo and saw a gorilla eat his own feces. I didn’t see that again until Tuesday night.

In truth, this “presidential” “debate” was worse than the zoo. Donald Trump came not to debate, but to desecrate. Whether his behavior will save his job and keep him out of jail is highly debatable.

Maybe it was his refusal to say he will accept the results of the election, and instead called mail ballots “a disaster.” In truth (a concept alien to Trump), during the last 20 years there have been a grand total of 143 criminal convictions for mail ballot fraud – which is .00006 percent of all the votes cast.

It could have been when Trump followed up Biden’s comments about his late son, Beau, with a blizzard of lies about Biden’s other son, Hunter, none of which are worth repeating here.

Actually, Trump’s worst moment was every moment that he rampaged through the proceedings, fuming, bullying, interrupting, crapping on civility. That’s what tinpot authoritarians do. They flood the zone with falsehoods and create so much chaos that citizens tune out for the sake of their sanity.

Trump can’t defend his dystopia – much less offer any kind of affirmative agenda for another four years – so his only play is to ruin the night for everyone else. When Biden surrendered to exasperation and said, “Will you shut up, man?” he spoke for the America that yearns to turn the page.

It’s hard to fathom what Trump hoped to accomplish. He’s losing badly in the polls – even red states like Texas and Georgia are virtually tied – largely because women detest him. In pivotal Pennsylvania, he’s currently losing women to Biden by 23 points. Yet there he was last night doing everything possible to alienate women further. He’s the quintessential guy who bulldozes women, nonsensically man-splaining when they try to talk. He’s the classic abusing ex-husband that they managed to get away from.

Suburban women, in particular, are turned off to Trump – who thinks he can win them over by scaring them with demagoguery about “radical left” minorities bringing in crime. He floated that con again Tuesday night, but Biden retorted at his best: “I was raised in the suburbs. This is not 1950. All these dog whistles and racism don’t work anymore. Suburbs are by and large integrated… What really is a threat to the suburbs and their safety is his failure to deal with COVID. They’re dying in the suburbs.”

At one point, amidst all the cacophonous cross-talk, Biden addressed the audience cringing at home: “Folks, do you have any idea what this clown is doing?”

I suspect they do.