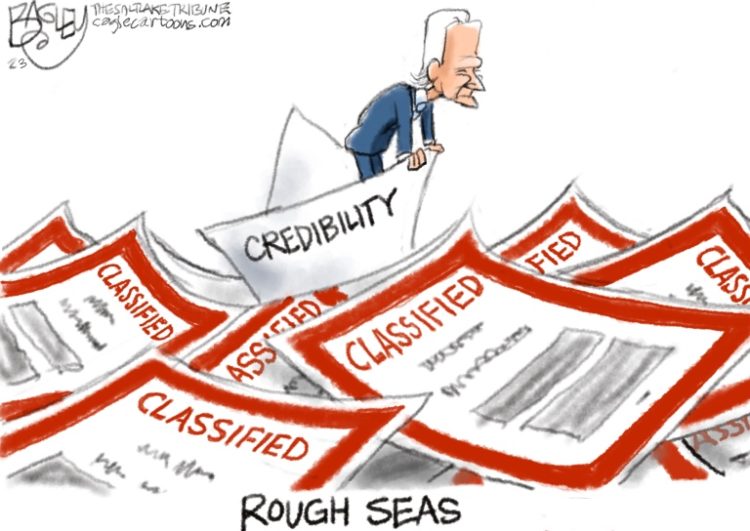 A constant in the political universe is the quest to occupy the moral high ground, that space that sets apart those with noble intentions and pure motives from those driven by craven desires in pursuit of personal gains.

Unfortunately, the fall from the rarefied air floating above the moral high ground is steep, and the landing can be bone-jarring.

Such is the fate of the Biden administration, which was knocked off balance by the discovery of classified government documents stored at the president’s former office in a Washington, D. C., think tank and at his private home in Delaware.

The president’s staff and supporters immediately sprang into damage control mode. They argue there no comparison between Biden’s possession of classified material and former President Trump, who came under repeated attacks and demands that he be prosecuted for storing cartons of classified documents at his Mar-A-Lago resort in Florida.

The Biden administration’s attempts to change the narrative failed, and the controversy exploded across the political environment amid accusations of hypocrisy and a double standard in the administration of justice.

Press briefings were public relations disasters. Press Secretary Karine Jean-Pierre appeared out of her depth yet again, thrown on the defensive as she struggled through increasingly contentious exchanges with reporters by claiming the administration acted properly upon discovering the documents. Unable to provide substantive answers, she simply refused to respond and referred all inquiries to the Department of Justice.

The most damaging blow to Biden’s credibility came with the revelation the classified material was found on Nov. 2 but not acknowledged publicly until earlier this month after a media leak, a time line immediately attacked by critics as an attempt to keep the discovery secret to avoid it becoming a perilous issue in the week leading up to the competitive midterm Congressional election.

There are differences between how Biden and Trump handled their situations. Trump was reportedly in possession of a far greater number of classified materials, and resisted turning them over to the National Archives, insisting they belonged to him. It took an FBI search of his home last August to retrieve the documents.

These distinctions are matters of degree rather than matters of fact, and as is the case in political disputes and controversies, subtlety, nuance, context and policy-driven explanations lack impact.

The media and political shorthand drive the narrative, particularly in an environment dominated by social media, which has become the principal source of information and a major factor in shaping public opinion.

The vast majority of Americans who consume news in appetizer nibbles rather than entrée bites view the issue starkly: “Biden and Trump did the same thing.”

As he did with Trump, Attorney General Merrick Garland has selected a special counsel to investigate the circumstances of the document discovery involving the Biden administration, establishing him as an historically unique individual overseeing investigations of a sitting president and his immediate predecessor for the same alleged violations.

Legal scholars have already weighed in, speculating that the Biden document discovery creates a serious roadblock to a potential indictment of Trump.

Trump could not have scripted it any better. The administration handed him a massive political gift, one he can and will use to reinforce his allegations of a partisan witch hunt by the Department of Justice and an administration guilty of boundless hypocrisy.

His floundering, flailing 2024 presidential campaign has been given an adrenaline boost. His dedicated band of followers will crow they were right all along, and that Trump is an innocent victim hounded relentlessly by a vengeful and vindictive political/media cabal.

The moral high ground has vanished ,and the political damage has been done – Biden suffers and Trump celebrates.

Copyright 2023 Carl Golden, distributed exclusively by Cagle Cartoons newspaper syndicate. Carl Golden is a senior contributing analyst with the William J. Hughes Center for Public Policy at Stockton University in New Jersey. You can reach him at [email protected]