Posted on October 13, 2021
You are here: Home / Breaking News / Biden had the edge but won no concessions from Putin in Geneva. 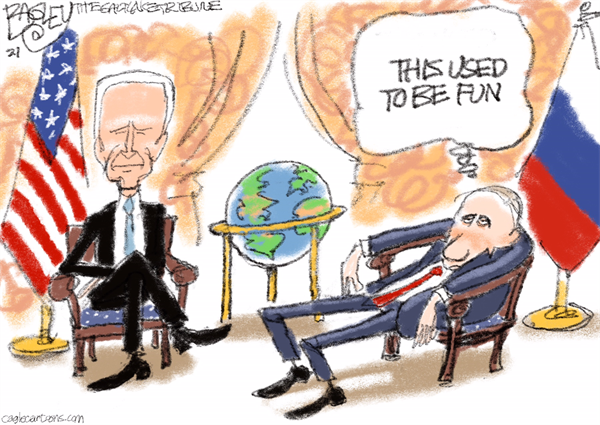 President Joe Biden used his heightened prestige won among Western allies recently to underscore his clear red lines for Vladimir Putin but did not get any significant foreign policy concessions from the Russian President. However, both made gains that could help them in their domestic politics.

After their June 16 meeting in Geneva, both said it was constructive but neither voiced confidence in it as a steppingstone capable of overturning the current low point in US-Russia relations or building new stability and predictability during the Biden presidency.

Using a soccer metaphor from the current EURO 2020 championship, the edge went to Biden because he was in the Russian half for much longer but he could not break through to score a goal.

The talks lasted less than four hours although a slot of up to five hours had been set aside. But the one-on-one session went to two hours, which is unusually long for such meetings. It is not yet known whether the two Presidents made commitments during the personal session that might put their countries on a path to rapprochement in coming months.

There were two wins. US and Russian ambassadors will return to Moscow and Washington in the next few days and a preliminary talks will begin soon at expert level on strategic nuclear weapons reductions.

Essentially, that means a gradual return to normal diplomacy following deep damage to relations after Russia annexed Crimea and launched a civil war in east Ukraine in 2014. Although neither Biden nor Putin said so, this could indicate that Biden may lean towards letting Putin off the hook for Crimea in return for compromise over east Ukraine, to focus more fully on US competition with China.

Ukraine President Volodymyr Zelensky seems to fear this because he declared last week that he will not accept any compromise involving his country made by Biden and Putin without his participation.

Putin pointedly told journalists after the Biden meeting that Ukraine has not met the terms of the Minsk-2 accords brokered by Germany and France in 2015. This is technically true but the fact is that the hastily drafted accords would make it difficult for the Ukraine government in Kyiv to control all its national territory.

Minks-2 has run into trouble because it would create nearly independent statelets heavily influenced by Moscow in the eastern Donbas region. That would make it almost impossible for Ukraine to bind with the European Union or become a member of NATO, the Western military alliance.

Biden has no solution to these divisions between Kyiv and Moscow because the situation is not just a border dispute with Russia or a simmering civil war inside Ukraine between Russian-speaking areas and the rest of Ukraine. It is a vital matter that has torn the fabric of the post-World War II order in Europe. But Biden is alone because Germany and France have offered no positive ideas, nor has Britain.

At the same time, it is seen as an existential issue in Moscow regardless of any new sanctions that the US and EU might impose following their newfound unity erasing the tumultuous years of Donald Trump.

This impasse has profound implications for power balances bordering the EU and for US leadership in the vast Eurasian region that stretches from Ukraine to China. That is also the region where both Russia and China are cooperating to reduce if not oust US influence.

The stakes will be higher especially after Biden’s troop withdrawal from Afghanistan and the modus vivendi he is seeking with Iran. Washington’s relationship with Turkey and Ankara’s loyalty to NATO also fall within this frame as does potentially troublesome Russian and Turkish military presence in Syria.

With an eye to the performance of Democrats in the 2022 elections, Biden could tell his domestic audience that he has done everything he set out to do in Geneva. That includes fixing redlines for Putin and demonstrating resolve to inflict pain on Russia (short of war) while opening pathways for cooperation on cyber security, ransomware and strategic nuclear security. Putin knows clearly now that the Trump era is over and there will be consequences for interference in America’s democracy, politics and business.

In turn, Putin can tell his people that he sat as an equal at the table with Biden who rules over an economy 12 times that of Russia and has access to far more allies and military power. He can assert that he stood up to combined US and European power represented by Biden, who met with G7 partners, NATO and EU leaders before coming to Geneva.

He can say that he, too, told Biden of his redlines which are that Washington should stay out of Russia’s internal affairs and its backyards in Europe and Eurasia. These are the keys to stable and predictable relations with Russia.

The backdrop to this posturing is that Putin’s regime could collapse if he does everything that Biden wants, including de-escalating cyber and ransomware attacks, releasing political prisoners and allowing opposition protests, restoring freedom of expression, giving the Donbas back to Ukraine and letting go of the harsh dictatorship in Belarus.