“Perchance he for whom this bell tolls may be so ill, as that he knows not it tolls for him . . . Never send to know for whom the bells tolls; it tolls for thee.” Thus writes 17th-Century Anglican priest and poet John Donne.

The tolling of the bell that Donne refers to “is the ring of a bell to announce a death”, a practice called the death knell.

The first half of the above quote is the beginning of Donne’s Meditation XVII. The second half of the quote appears later in Donne’s meditation.

Currently in the 2016 presidential race, it may be that she for whom this bell tolls may be so ill, as that she knows not it tolls for her – with that she and her being Hillary Clinton. 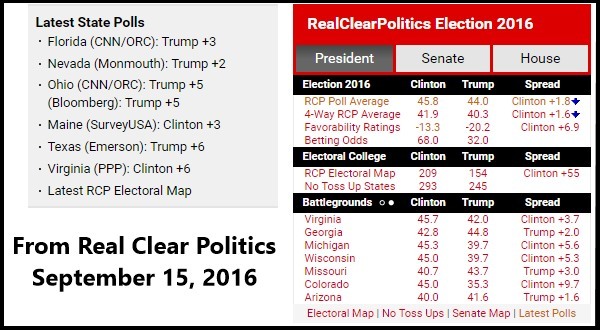 A 09/15/16 CBS News story says, “With the first debate less than two weeks away, Donald Trump and Hillary Clinton are in a tight race for the presidency nationally. Clinton has just a 2-point edge in a two-way match-up among likely voters. The race is tied when third party candidates are included.”

“Donald Trump is ahead of Hillary Clinton in the key battleground states of Ohio, Florida and Nevada, according to new polls released Wednesday.

The Republican nominee is enjoying a 5-point lead in Ohio in a new Bloomberg Politics poll. In a head-to-head matchup between Clinton and Trump, he led 48%-43%.

The margin remained the same when third-party candidates were added. Trump had 44%, Clinton had 39%, Libertarian Gary Johnson had 10% and Green Party candidate Jill Stein had 3%.”

The booking odds may still favor Clinton, but Trump still has an opportunity to pull ahead of Clinton enough to win.