Categories Menu
Home » Law » Barr reminds Mueller: If you want a friend in Washington, get a dog

Posted by Dana Milbank, Washington Post Columnist on May 3, 2019 in Law, Politics | 0 comments

Barr reminds Mueller: If you want a friend in Washington, get a dog 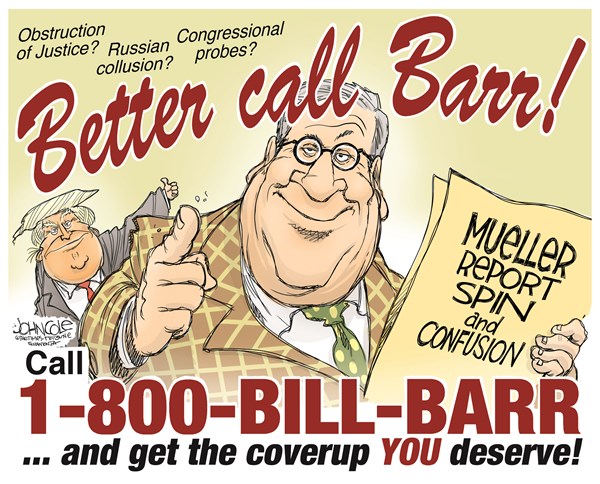 WASHINGTON — Eight-year-old Liam Daly became an internet sensation when he penned a letter to his grandfather, William Barr, while sitting in the front row at Barr’s confirmation hearing in January.

“Dear Grandpa,” he wrote. “You are doing great so far. But I know you still will.”

Alas for Liam, and for all of us, it was not to be. Now, just weeks on the job as President Trump’s attorney general, Grandpa has disgraced himself. The speed with which Barr trashed a reputation built over decades is stunning, even by Trump administration standards.

Before, Barr was known as the attorney general to President George H.W. Bush and an éminence grise of the Washington legal community. Now he is known for betraying a friend, lying to Congress and misrepresenting the Mueller report in a way that excused the president’s misbehavior and let Russia off the hook.

“No, I don’t,” Barr replied under oath, speculating that they “probably wanted more put out.”

Thanks to The Washington Post’s reporting, we now know that two weeks before Barr denied knowledge of the Mueller team’s displeasure, he received a letter from Mueller complaining that Barr’s summary “did not fully capture the context, nature, and substance of this office’s work and conclusions” and resulted in “public confusion.”

Barr, caught in flagrante delicto in his deception, told senators Wednesday that “the question was relating to unidentified members” of Mueller’s team, not Mueller himself — a technical answer that might get him off for perjury but doesn’t avoid the conclusion that he deliberately misled Congress and the public.

Why didn’t Barr disclose the Mueller letter when Crist asked the question? Barr replied that Crist had posed “a very different question.”

Of equal concern, Barr rejected Mueller’s requests to release more of the report to clear up the confusion. “At that point, it was my baby,” Barr told the Senate Judiciary Committee on Wednesday. “It was my decision how and when to make it public, not Bob Mueller’s.”

It was his baby, and he smothered it — thus allowing Barr’s misrepresentation of Mueller’s report (characterized by Trump as “total exoneration”) to harden.

Barr’s mistreatment of Mueller is all the more appalling because, during his confirmation hearing, Barr boasted that the two men and their wives were “good friends” and would remain so. Barr reportedly told a senator privately that he and Mueller were “best friends,” that their wives attended Bible study together and that Mueller attended the weddings of Barr’s children.

If so, Barr’s betrayal reminds us: If you want a friend in Washington, get a dog. In addition to his unilateral clearing of Trump on obstruction of justice (something Mueller did not do), Barr also echoed Trump’s claim that there was “no collusion” (a question Mueller did not address) and that there had been “spying” against Trump’s campaign.

Barr continued undermining Mueller on Wednesday, calling Mueller’s letter to him “a bit snitty” and saying Mueller should have ended the investigation if he didn’t think it in his purview to say whether Trump committed a crime. And Barr eagerly played Trump’s defense lawyer.

Barr devised the implausible explanation that Trump only wanted Mueller replaced by “another special counsel.”

Barr also defended his assertion that Trump “fully cooperated” with the investigation, even though he refused to be interviewed and tried to get then-Attorney General Jeff Sessions to unrecuse himself and shut down the inquiry.

“I don’t see any conflict between that and fully cooperating with the investigation,” Barr reasoned.

Even Barr’s choice of pronouns — “we have not waived the executive privilege,” he said — showed he was Trump’s lawyer, not America’s attorney general.

Even an 8-year-old knows lying is wrong, whether it’s legal or not. Surely Grandpa Barr should have. The attorney general owed better to his “friend” Mueller, and to the rest of us.