Posted on January 16, 2022
You are here: Home / Featured / Bannon indicted by federal grand jury for contempt of Congress 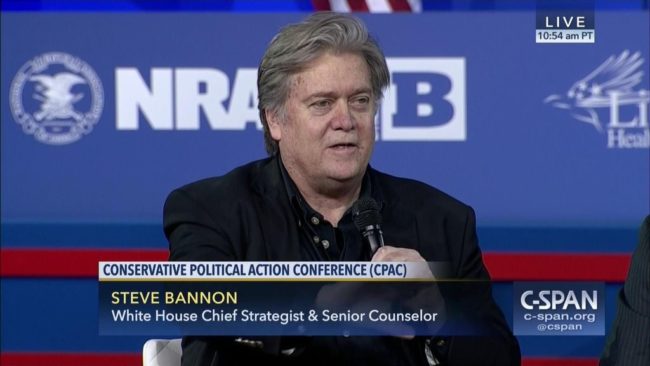 A lot of punditry in the mainstream press and on social media has expressed dismay over how some Donald Trump associates (and Trump himself) have shown disdain towards Congress with no conquences. Today former Trump advisor Steve Bannon ran smack dab into consquences:

Former Trump adviser Steve Bannon was indicted by a federal grand jury Friday, charged with contempt of Congress for refusing to answer questions from the House Committee investigating the Jan. 6 Capitol riot.

The indictment is a first. No one has ever been prosecuted before for contempt of Congress when executive privilege was asserted. The past cases involved defendants whose testimony was sought regarding their government service. Bannon, by contrast, left his White House job in 2017, well before the period of interest to the House committee.

He was charged Friday with two contempt counts — one for refusing to appear for a deposition and another for declining to produce documents requested by the committee.

Neither Bannon nor his attorney immediately responded to a request for comment.

Attorney General Merrick Garland, in a brief statement, said, “Since my first day in office, I have promised Justice Department employees that together we would show the American people by word and deed that the department adheres to the rule of law, follows the facts and the law, and pursues equal justice under the law. Today’s charges reflect the department’s steadfast commitment to these principles.”

The fact that the Justice Department was willing to charge him with criminal contempt, despite an assertion of executive privilege, may help persuade other reluctant witnesses to agree to cooperate with the committee’s investigation.

Good for Attorney General Garland! Finally indicting Bannon is the right move. Much better late than never. Such a relief! https://t.co/JG4wcJg6l9

Steve Bannon is an immediate flight risk and must have his passport sized before he sneaks on to the yacht of his sugar daddy and slips the net of justice.

Now can we give Garland a break?