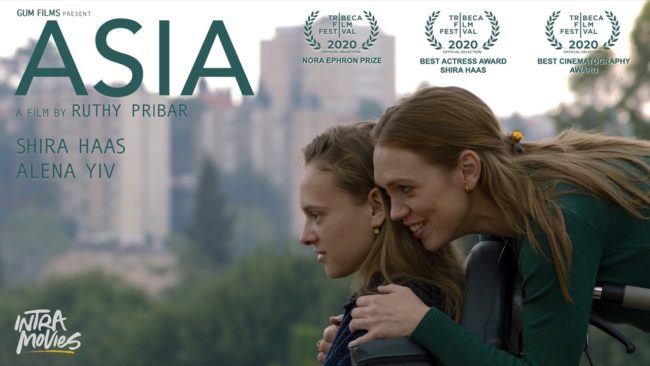 Don’t read this if you (A) haven’t seen the Jewish Film Festival movie “Asia” and still hope to see it, (B) have seen it and are still too emotionally shaken by the movie to discuss it, or (C) don’t like movies that try to be more than simply “good stories,” for whatever reason. (including my wife, who I’ll call “Jeri,” because that’s her name).

Actually, Jeri loved “Asia,” but she often scolds me when she thinks I’m too critical of movies. “Can’t you just watch a movie without analyzing it?” she has been known to say, with a touch of annoyance in her voice.

Back to “Asia.” It’s much more than simply a “good movie.” What makes it more is less. It’s missing scenes that explain everything; it’s missing unflawed characters. And it’s missing scenes where tragic characters find happiness, like losing their virginity just before they die too young. (I included that line in this review for the same reason that “just good” movies include those scenes.)

“Asia” doesn’t pander in the way I just did. It tears apart viewers and brings tears to viewers by avoiding those kinds of cheap ploys. So, the tragic character dies a virgin, and the movie ends without following up an assisted suicide with courtroom scenes in which the assister has to justify her assistance. It doesn’t consummate a sex scene, because some sex scenes should not be consummated and the character who tries to consummate a sex scene with good intentions doesn’t have to feel good for trying. And viewers don’t have to see the mother of the tragic character come to peace with her daughter’s death and her role in it.

Michael Ginsberg’s journalism career started badly, when an editor added to his yearbook review of his high school football team’s season, “Ask not what your team can do for you; ask what you can do for your team.” After his “libel by cliche” lawsuit failed, he wrote for his college newspaper, detoured briefly as an elementary school teacher and returned to journalism at the Asheville Citizen-Times, Greenville (SC) News-Piedmont and Wichita Eagle-Beacon. He retired from reporting to earn a Ph.D. in Reading Education and spent 25 years as an English faculty member at a community college in Louisville, Kentucky, where he presently lives. During that time, he engaged in freelance writing and editing, which he continues to do, as well as teach ESL Reading. He is still seeking justice from his high school.