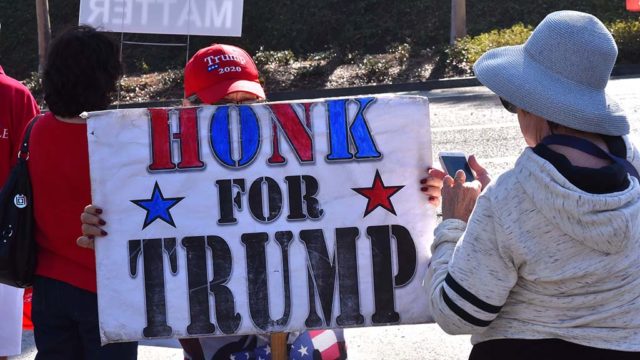 Supporters of President Trump in in Oceanside protest an appearance by House Speaker Nancy Pelosi in November. Photo by Chris Stone

As she has done for the last three years, New York Times columnist Maureen Dowd gives over her space on Thanksgiving to her conservative brother, Kevin, who this year tells us why he supports Donald Trump.

The reasons are what we’ve come to expect from someone pickled in the Fox News ethos. Liberals “sneer” at religious conservatives. He is thrilled with how the stock market is doing, which he attributes to Trump’s tax cuts and deregulation. The impeachment inquiry is of course a farce because “Ukraine didn’t do the investigation and the aid was released.” Besides, “all aid is quid pro quo.”

It would be easy to answer Kevin Dowd point for point. Liberals don’t sneer at religion; they sneer at people who think that Donald Trump is chosen by God, and they fear those who would impose their values on everyone else. The market is doing well, but the wealth is far from equally distributed; the tax cuts put billions into the hands of those who needed it least, and did not result in a windfall of business investment.

As for impeachment, by that logic, attempted murder is no crime because the intended victim lived, and surely there is a difference between pushing an aid recipient nation into doing something that is in America’s interest and pushing Ukraine to interfere in an election by saying they would find dirt to smear Trump’s political opponent.

But the deeper question is why someone as obviously smart as Kevin Dowd would believe such hogwash? Why does he have such faith in Donald Trump? And it’s not just Kevin Dowd. The same question applies to Trump’s allies in the House and Senate.

Why do Devin Nunes and Jim Jordan spin fairy tales (Ukraine has Hillary Clinton’s server and they interfered in the 2016 election) and do their level best to undermine the impeachment process’ credibility? Why has Lindsay Graham gone from calling Trump a “race-baiting, xenophobic, religious bigot” to become his most vociferous defender in the Senate? Why have the people Trump has hounded out of government service, such as Jim Mattis, Rex Tillerson and even Jeff Sessions remained silent about Trump’s incompetence?

Surely, the answer goes beyond merely having power. The Republican agenda would do just as well under Vice President Mike Pence. And you would not have someone who pardons war criminals. There has to be another answer. But what it is, I do not know. I do not understand what inspires such dogged loyalty to a man who is loyal only to his self-interest.

To understand what is happening, we need a novelist who would do for the present state of the Republican Party what Joseph Conrad, Henry James, Seamus Heaney, Nadeem Aslam, John Updike and Don DeLillo, among others, have done for radical Islam and terrorism. That’s what I explore in my new book, Unspeakable: Literature and Terrorism from the Gunpowder Plot to 9/11.

I’m aware that readers might squawk at my comparing political opponents to terrorists and murderers. But here’s why: in both cases, there is no understanding of the why and wherefore between the warring parties. Terrorists, especially after 9/11, are considered “alien and repellent,” as Updike’s Secretary of Homeland Security puts it in his novel, Terrorist. Their motives and their goals are utterly opaque.

But using their imagination, Updike and others try to see the world from the other side. To understand what seems incomprehensible. And it’s necessary because, as Updike told the New York Times, “Nobody’s trying to see it from that point of view.” So that’s the project they set for themselves: to go beyond denunciation and try to understand the motivations of those who would do us harm.

That’s what needs to happen to explain Trump’s supporters. What we need more than anything right now is for a novelist, or a filmmaker, to help explain ourselves to ourselves. To dig deep and explain the Trump phenomenon to those like myself who cannot fathom the attraction. To explain what draws Kevin Dowd into the alternative universe of conspiracy theories and fake news.

And to explain to Trump supporters why asking a self-interested favor of the Ukrainian prime minister is really a bad, impeachable idea.

Peter C. Herman is a professor of English Literature at San Diego State University. He is an expert on Shakespeare and Milton, and is author of the new book Unspeakable: Literature and Terrorism from the Gunpowder Plot to 9/11. This article is reprinted from The Times of San Diego which, along with The Moderate Voice, is a member of the San Diego Online News Association.