The saying goes, “Bad habits are hard to break.”

In the case of Trump, they only get more ingrained, tiresome and disgusting.

Below is a “Nasty Woman” cartoon presciently published by David Fitzsimmons, 21 October 2016, just a couple of weeks before the fateful presidential election. 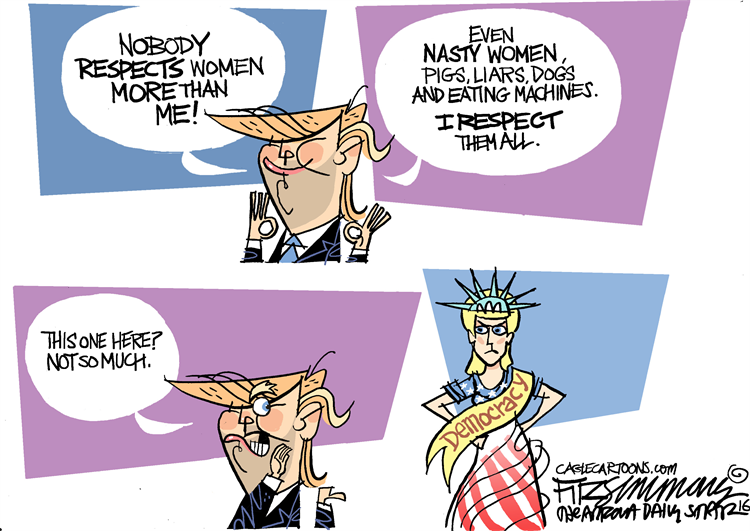 If I was a betting man, I could have bet a good amount on the probability that Trump’s first comments on Joe Biden’s selection of Kamala Harris as his vice presidential running mate would include the misogynist epithet “nasty woman.”

But my payout would have been very meager as the odds that Trump would do exactly that were extremely high.

A year ago, the Huffington Post published a “non-exhaustive list of the women whom Trump has demeaned using the word ‘nasty.’”

“Non-exhaustive” is correct because the list only included seven (prominent) women.

Among those seven were Democratic Presidential Nominee Hillary Clinton. Trump’s insult of “nasty woman” became a rallying cry for women around the country and feminists “wasted little time in repurposing the term, using it to identify women who buck patriarchal systems.”

Instead, Trump tripled down, unfurled “a string of sexist attacks” calling Harris “very nasty,” “extraordinarily nasty,” “probably nastier than even Pocahontas…” “nasty to a level that was just a horrible thing,” and the “meanest, most horrible, most disrespectful of anybody in the U.S. Senate.”

Trump has a well-documented habit of questioning – insulting — the intelligence, character and appearance of women who question or oppose him by calling them “nasty” — and worse.

Others on the Huffington Post list of women whom Trump has demeaned with the “nasty” label are:

• Meghan Markle, the Duchess of Sussex.

A frequent recipient of the “nasty” epithet, along with other demeaning insults, is that “nasty, vindictive, horrible person,” House Speaker Nancy Pelosi.

The Huffington Post’s list of women Trump has debased is not at all “exhaustive.”

In an August 2019 Washington Post piece, Aaron Blake lists 14 women who had drawn that “label” since Trump launched his 2016 campaign.

But “nasty” is not the only insult Trump uses to “tar women who don’t bend to his will” and political opponents are not his only target.

In October 2017, Axios published a list of prominent women whom Trump had viciously attacked — up to that time — with insults such as:

• On ailing Justice Ruth Bader Ginsburg: “”What does she weigh? 60 pounds?”

• On Carly Fiorina: “Look at that face! Would anyone vote for that?”

• On Mika Brzezinski: “Low I.Q. Crazy Mika, along with Psycho Joe, came to Mar-a-Lago…She was bleeding badly from a face-lift.”

• On Rosie O’Donnell: “A fat pig,” “Rosie O’Donnell is disgusting, both inside and out… she’s a slob,” “A big, fat pig named Rosie”

Since this is a family publication, we’ll leave out the more disgusting, lewd, “sex-object” statements Trump has made about women.

Those who wish to pursue this unseemly side of “our president” farther, can go HERE and HERE.

But since every American heard it with his or her own ears and a large minority of Americans still deemed Trump to be presidential material, the following “seminal,” vulgar attack on all women by Trump must be noted: “And when you’re a star, they let you do it. You can do anything…Grab ’em by the pussy. You can do anything,” Trump boasted in 2005.

One of Trump’s favorite ways of attacking women is by calling them “dogs,” “pigs,” or variations thereof such as “face of a dog,” “big, fat pig,” and don’t forget “horseface” and “slobs.”

Sometimes Trump can be “kinder” as when he refers to Speaker Nancy Pelosi as a “sick puppy” and to Miss Universe pageant winner Alicia Machado as “Miss Piggy.” Bless his heart!

Ja’han Jones, in the Huffington Post article quoted at the top, made two prescient statements.

Referring to the list of women Trump has called “nasty,” Jones said, “If past is prologue, it’s primed to grow faster than the president’s vocabulary.” True!

Whether [Trump’s] continued reliance on the word [“nasty”]is strategy, the marking of a simple mind or some combination of the two is the subject of frequent debate. It is worth noting that the president has deployed a similar tactic to publicly insult the intelligence of Black people who don’t comply with his wishes.

With Kamala Harris, a woman of color, and, thus, what some might nefariously call a “target-rich environment,” the misogynism and bigotry in Trump’s heart and head must be tripping all over each other to finalize his sinister reelection strategy.