Acid Test: LSD vs. LDS is a conversion tale of Mormonism, punk rock 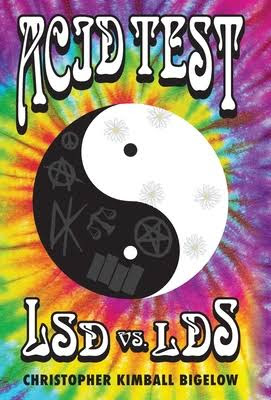 “Acid Test LSD vs. LDS,” 2020, Zarahemla Books, is a long-awaited memoir from Mormon writer, editor and publisher, Christopher Bigelow. At its foundation, it’s a re-conversion tale. The author chucks away his Mormon faith — proclaiming it bland and conformist — after graduating high school, and re-converts after a short spell of trying to acclimate himself to what he describes as a “chaotic neutral” existence, to use a Dungeons and Dragons term.

The seeking-to-be-“chaotic-neutral” period involves sampling or observing modes of life his religion prohibits, or frowns on: including semi-communal living, a brief sojourn back to his childhood area, Southern California, drug use (particularly LSD), shunning higher education, scattered low-paying work life, attempts at a punk lifestyle, launching a punk ‘zine that focuses more on critical thought than reviews and interviews,  fornication, mooching from parents, satanism, petty theft, and homosexuality.

At its heart though, “Acid Test,” I suspect, is an homage to an era of Salt Lake City counterculture of the mid-1980s, when the city boasted an often unique punk and New Wave culture, with local bands, and musical venues and clubs filled with younger adults embracing a movement at odds with Mormon culture, and for that matter, Reaganism. Even readers, such as myself, with musical tastes that never approach punk, will smile with nostalgia as Bigelow recalls journeys to Cosmic Aeroplane shop or the Blue Mouse theater. This was also the era of Mormon conman/murderer Mark Hofmann, scamming gullible LDS Church leaders with fake memorabilia, and bombing people to death.

It really was a crazy time.

The very young Bigelow packed a lot of life into the short time this memoir covers. In Salt Lake area lodgings that eventually became packed with friends and squatters, he stayed in several locations. At times the reader forgets he’s a youngster, 17 when the tale starts. He has an endearing immaturity mixed with an unfeigned quest to challenge conventions. At the beginning, nothing frightens him. Even the occult is a subject worth exploring.

The author’s family history is etched in Mormon history, Heber C. Kimball, Brigham Young, and many more, all related to the author. The teenage Bigelow is perceptive enough to understand that the corporate-life LDS Church he shunned in 1984 was once a progressive, way-out-of-the mainstream religion when Joseph Smith and Brigham Young were its prophets. Many early church policies and doctrines we don’t talk much about today fascinate Bigelow and his adventures in Acid Test seem an effort to connect with the spiritual bohemianism of his early-LDS ancestors

For someone who has never taken LSD, Bigelow’s vivid descriptions of what the world appears like to an LSD user tripping is fascinating and almost, but not quite, tempts this reviewer to sample it. However, later in the memoir, Bigelow’s enthusiasm for drugs is tempered, replaced by a fear that it’s a tool of dark entities to lead souls away from spirituality.

Bigelow was already an accomplished ‘zine publisher as a high school student. In Acid Test, he recounts efforts to start a ‘zine, called Flourishing Wasteland. After a spotty start, he works very hard on issue 2. However, his interest wanes and then concludes as he begins a re-conversion to the LDS Church.

The author’s effort to cast aside concepts of good, and evil start to shake a bit after he takes LSD a lot. He senses deception in his LSD experiences, questions how real they are. He is also fascinated with the Stephen King novel, “The Stand,” which involves a near total loss of human life and survivors who gravitate toward locations with leaders who represent good and bad.

There is a central reason Bigelow returns to Mormonism, and this memoir (a trilogy is planned) ends with the author’s mission approaching. I don’t want to give away the distinct event that motivates Bigelow to give up an alternative lifestyle and return to staid Mormonism. Getting around that, reading Acid Test made me think about all those Bible-like quotes in the Book of Mormon that talk about a sinner being past the point of redemption and consigned to hell. I don’t like any idea of a literal hell but Acid Test posits to me the possibility that those types of scriptures, in the Book of Mormon or The Bible, are talking not about a hypothetical lake of fire but instead a consistent state of wickedness that goes on too long, leaving the sinner devoid of grace, incapable of repentance, and redemption.

Another reason for the author’s disillusionment for “chaotic neutral” is more simple. He loves a teenage girl. Her promiscuity causes him normal pain. He includes her in his re-conversion efforts. She joins in the effort but the relationship seems shaky as the memoir ends.

Bigelow is a very talented writer. I read a review that compared Tom Wolfe’s “The Electric Kool-Aid Acid Test” to the memoir. It’s probably apt but I thought more of George Orwell’s memoir/fiction when I was reading. Bigelow’s conflicted thoughts, yearning for a meaning, and despair of a shaky love reminded me Orwell’s “Burmese Days.” His at-times narrative, matter-of-fact, without-self-pity accounts of unpleasant circumstances (including a date with middle-aged male “chicken-hawk” ) remind me of the style of Orwell’s ‘Down and Out in Paris and London.”

Late in the book, Bigelow laments that, for the most part, he’s not getting the spiritual charge he’s led himself to believe that conversion to the faith promises. The Scriptures are a tough slog, church meetings are still regimented, even the Temple lacks the spiritual manifestations that others have talked of. It’s a reminder that spiritual experiences are rare commodities for most of us, and that endurance is a more valuable tool toward church activity.

Bigelow grew up in a family with parents that represent an earlier generation follower of Mormonism, one that talked more of the Three Nephites, of Cain roaming the earth, of White Horse Prophecies, and demons struggling to lead us into darkness. Each life is a battle between good and evil. Spiritual manifestations seemed to be more common in “those days.” Bigelow mentions his mother having several spirit observances. On a side note, my parents were that way. My late mother once told me she saw the Savior’s profile in the temple.

Ultimately, these traditionalist Mormons serve as a catalyst for the author’s return to his family’s faith. They never abandoned their son, and were often ready to provide assistance. This underscores another strength of the memoir; that love is still a commandment, even if the recipient is not living as parents, or others, might wish they lived. Some of the characters in Acid Test had depressing futures and ends. Others had better futures. Some of them did not receive unconditional love.

You can buy Acid Test LSD vs. LDS via Amazon here. This review is crossposted at Plan9Crunch blog.