Posted on November 25, 2020
You are here: Home / Media / A Wannabe Dancer Dishonors a War Hero (UPDATED)

In the military, we had a saying to make it clear that one had an even stronger opinion about a subject or an issue under discussion.

Reacting to Tucker Carlson’s insolent comments about her character, patriotism and service to country (below), Senator Tammy Duckworth simply responded “Does @TuckerCarlson want to walk a mile in my legs and then tell me whether or not I love America?”

Well, today in an opinion piece at The New York Times, the war hero did indeed follow her tweet with a much stronger message.

In “Tucker Carlson Doesn’t Know What Patriotism Is,” Duckworth – again, as we said in the military — “let him have it.”

A rebuke in which she defends her patriotism and her service – including war injuries — against one who “doesn’t know what patriotism is.”

In her rebuke which includes Trump, who also never served, she defends her love for the country she “went to war to protect.”

Duckworth claims Carlson and Trump question her patriotism because they are “desperate for America’s attention to be on anything other than Donald Trump’s failure to lead our nation, and because they think that Mr. Trump’s electoral prospects will be better if they can turn us against one another.” She adds, “Their goal isn’t to make — or keep — America great. It’s to keep Mr. Trump in power, whatever the cost.”

Carlson and Trump should know, she continues “attacks from self-serving, insecure men who can’t tell the difference between true patriotism and hateful nationalism will never diminish my love for this country — or my willingness to sacrifice for it so they don’t have to. These titanium legs don’t buckle.”

So while I would put on my old uniform and go to war all over again to protect the right of Tucker Carlson and Donald Trump to say offensive things on TV and Twitter, I will also spend every moment I can from now until November fighting to elect leaders who would rather do good for their country than do well for themselves.

After graduate school, she joined the United States Army Reserve and chose to fly helicopters. After his college graduation, he tried and failed to persuade the Central Intelligence Agency to employ him.

A few weeks before the UH-60 Black Hawk helicopter she was co-piloting was hit by a rocket-propelled grenade in Iraq, resulting in the loss of both her legs, he, while co-hosting “Crossfire,” received an ignominious “on-air dressing down from the comedian Jon Stewart that led to the cancellation of “Crossfire.”

While she spent a year recovering at Walter Reed Army Medical Center and learning to use what was left of her legs again, he was trying his hand at another TV show and perhaps already dreaming of trying his legs at the reality show Dancing with the Stars.

The same year that he appeared on Dancing with the Stars and was the first contestant to be eliminated, she became director of the Illinois Department of Veterans Affairs where she established innovative programs to help veterans with post-traumatic stress disorder and other injuries.

Of course, the “she” above refers to Purple Heart recipient, war hero and now United States Senator Tammy Duckworth. 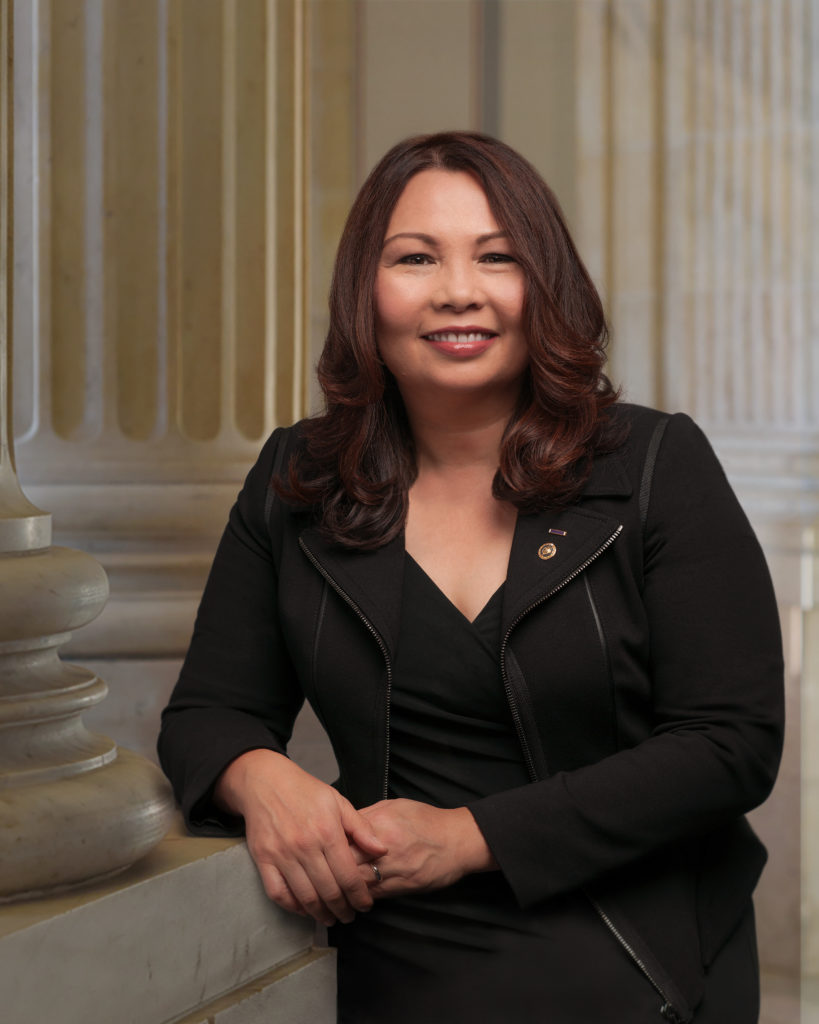 And of course, the “he” is Fox News host Tucker Carlson.

Almost 16 years after she almost gave her life for her country and he almost made it on Dancing with the Stars, they find themselves at the center of attention.

The almost CIA agent and almost star dancer had the gall to attack a genuine – not “almost” — war hero and patriot.

On his show on Monday, Carlson called the Purple Heart recipient “a deeply silly and unimpressive person,” suggested that the Senator hates America and questioned her patriotism.

Believing that he had not sufficiently humiliated himself, his network and – worst of all — a war hero, Carlson doubled down Tuesday night calling the double-amputee a “coward,” “fraud” and “moron.”

Why all this hate and vile towards a decorated war hero?

Simply because Duckworth called for a “national dialogue” regarding monuments amid the larger issue of race relations.

Many have condemned Carlson’s disgraceful display of lack of patriotism.

President Trump and Tucker Carlson are clearly intimidated by strong female leaders like my friend Sen. Duckworth. She has more honor and love for our country in her pinky finger than they’ll ever have.

However, the patriot, the hero, the Senator does not need help.

Does @TuckerCarlson want to walk a mile in my legs and then tell me whether or not I love America?

Please reflect on that, Mr. Carlson. Perhaps you should spend more time taking some (more) dancing lessons. Dancing with the Stars hopefully will be back next year...if Trump gets real control of the pandemic.