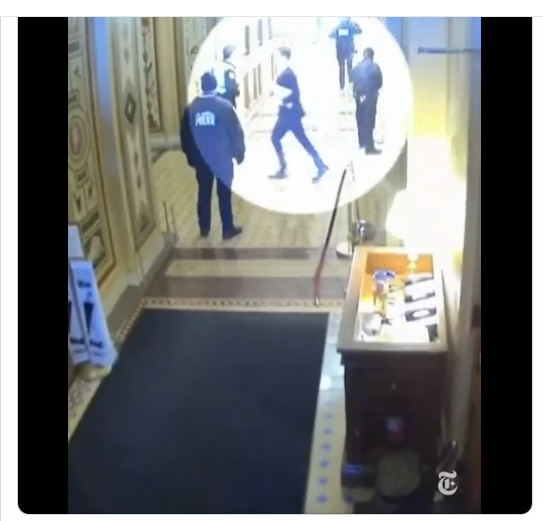 Fox News host Mark Levin is upset that the January 6 committee put on full display the cowardice of Senator Josh Hawley by showing him sprinting through the halls of Congress to evade the mob he himself – moments before – had incited.

According to Newsweek, Levin is accusing the committee of “violating Article 1 of the Constitution by ridiculing Republican Senator Josh Hawley at its latest hearing.”

“How they tried to humiliate Senator Hawley, it’s really not about Jan. 6,” Levin says, claiming “Congress doesn’t have plenary powers to do whatever it wants.”

Thank God, the People still have the power to call out cowardice and treason when they see it.

Among the moments of shock and disbelief surrounding the January 6 insurrection evoked by the Congressional panel last Thursday was a “blackly hilarious” moment that elicited laughter from an otherwise somber audience. I call it well-deserved schadenfreude.

They are the ignominious images and videos of long-legged Missouri Senator Josh Hawley sprinting like an Olympian from the mob he had earlier incited – an Olympian being chased down Mount Olympus by a disgusted Zeus.

The senator and his cowardice have been preserved for the ages by a thousand hilarious memes. He has been widely ridiculed, excoriated, called “a laughingstock,” including in an editorial in his own home state newspaper, the Kansas City Star.

Nor did the numerous critics who have examined Hawley’s disgraceful performance from every conceivable perspective.

One such critic is Zoë Rom, a Boulder based journalist, a runner (“When she’s not running, she’s climbing… ), and running coach.

In a recent edition of Outside, she analyzes Hawley’s sprint: “His form! His apparel! His complete and utter lack of regard for democratic norms!”

Here are some of her findings.

Warning that a good forward lean is important when “fleeing the violent mobs whose fury you stoked for your own political gain,” she observes that Howley’s lack of forward lean might be “due to the absence of any spine.”

“Hawley’s foot is landing on his heel, well in front of his knee, what we call ‘overstriding.’Overstriding can be caused by weak glutes, which is surprising in someone whose worldview is complete ass.”

“A clear indicator of someone who’s been practicing their footwork by dancing around any form of accountability.”

“Merino wool is perfect for your sheep-like devotion to a minoritarian movement (plus, it’s naturally odor-blocking!).”

“If you need to make a break for it down a marble hallway, I’d recommend a shoe with a rubber sole and more breathability.”

Zoë Rom concludes with some sound advice for the Senator:

For sure, it’s a bad look to be fleeing an insurrection that you caused. But if you’re going to do it, at least have the proper form and equipment on your side. The only fate worse than jail time for treason is plantar fasciitis.