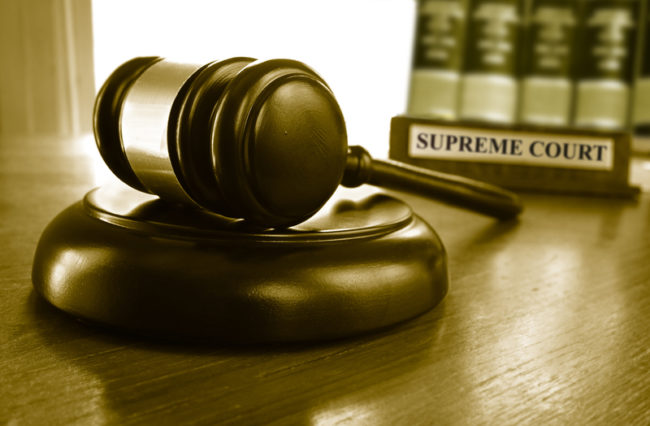 McConnell and Trump got what they wanted. A partisan Supreme Court with a 6-3 conservative majority. McConnell prevailed by using unethical tactics, but he did not care. Though Trump and McConnell did not and still don’t see eye to eye on many issues, they both agreed that a conservative Supreme Court was a vital matter and any means that were necessary to reach their objective was worth it: by hook or by crook and they used both. No moral or ethical compass for either.

The unethical procedures began in the last year of Obama’s presidency when a seat opened up on the Supreme Court and the president nominated Merrick Garland, a centrist candidate who was well thought of in legal circles for the position. Disregarding precedent, McConnell decided that a nominee for the highest court should not be confirmed in the last year of a president’s term. This had never happened before, but McConnell proclaimed a new rule. He was hoping that a conservative Republican would next win the presidency and nominate a conservative candidate for the Court. His wishes were granted and Trump was elected president because of the arcane and undemocratic mechanism of the Electoral College, even though Trump lost the popular vote.

Trump’s initial nominee to the Court was conservative Neil Gorsuch who took the seat that should have gone to Merrick Garland. His second nominee was conservative Brett Kavanaugh who was accused of attempted rape by Professor Christine Blasey Ford when he was a high school student, and of sexual assaults on other occasions. He was also known in high school and at Yale as a heavy drinker. The FBI was not given permission by Trump and the Justice Department to look into all the complaints of sexual assault before Kavanaugh was confirmed by a Republican majority Senate. It was believed that Kavanaugh had likely lied to the Senate when questioned about the assaults.

The most hypocritical confirmation of a Supreme Court nominee shepherded in by McConnell came at the end of October 2020 when President Trump only had two and a half months left on his term. Amy Coney Barrett, another conservative was confirmed by the Republican controlled Senate, 52-48. She rose from being a little known law professor at Notre Dame to the Supreme Court in three years. Mitch McConnell simply changed his mind about nominating a member of the Court in the last year of a presidential term when that person happened to be a staunch conservative. And it wasn’t in the last year but the last two and a half months. Barrett replaced Ruth Bader Ginsburg, a liberal justice who was held in very high regard in legal circles.

Prior to Trump’s presidency in 2013, the Supreme Court voted to overturn the main part of the 1965 voting rights act by a 5-4 vote, allowing nine states, mainly in the South, to alter their voting laws without obtaining federal approval in advance. The Court said that society had changed and federal supervision was no longer necessary. Since then, there have been major efforts to suppress minority voting in a number of states, by making registration and voting much more difficult. In fact, the Justice Department recently sued the state of Texas for their restrictive laws, a case that is certain to go before the Supreme Court. This term, the Court will also rule on a restrictive law regarding abortion passed by the state of Mississippi. Given the questioning by the Court of both sides, it is likely that Mississippi’s law will be upheld and Roe v Wade may even be overturned.

It is sad for our democracy that presidents who lost the popular vote have handed the Supreme Court over to conservatives who were confirmed by Senators who in total had less popular votes in being elected than their Democratic opponents. Is this the way democracy works? Unfortunately, it is. The only way this partisan Court can be changed is by Democrats maintaining control of the Senate and voting to expand the number of justices on the Court. Limiting the terms of justices so there is more frequent turnover would also be a sensible idea.

www.robertlevinebooks.com Buy The Uninformed Voter on Amazon and Barnes and Noble.