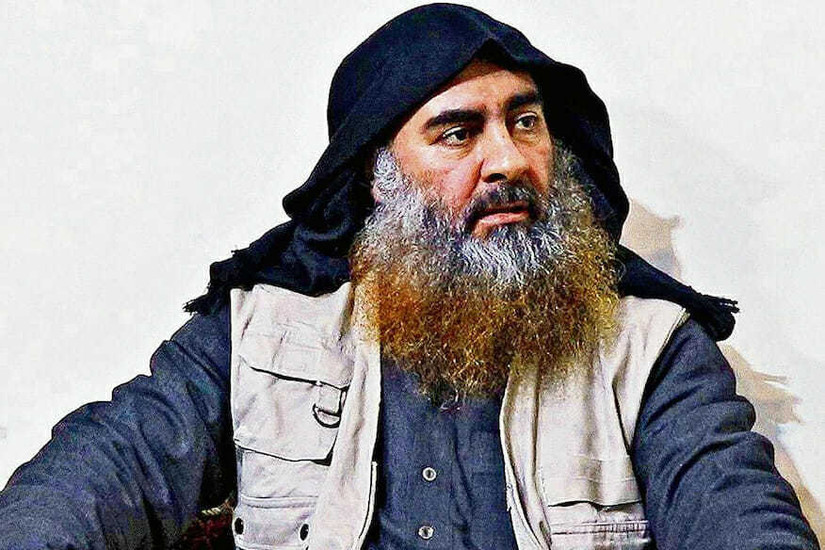 By now we have all seen and heard Trump taking his personal victory lap after our Special Operation Forces killed Abu Bakr al-Baghdadi, the ISIS leader.

In his announcement of the raid and during a 40-minute press conference afterwards, Trump said of Baghdadi, “He was screaming, crying, and whimpering…he was scared out of his mind…[he] died like a dog. He died like a coward.”

Trump intimated 9/11 might not have happened had the US read and listened to the advice in his book (“and I don’t get any credit for this, but that’s OK, I never do.”) and at the same time minimized the significance and horror of Osama bin Laden, the World Trade Center and bin Laden’s demise.

To top it all off, Trump divulged multiple sensitive details about the raid in Syria.

In short, he embellished, fabricated, unnecessarily painted a gory scene and made it all about himself what should have been a somber, dignified and unifying address to the nation

For an accurate description of the “exquisitely planned and executed” mission to capture or kill al-Baghdadi, read the words of Marine Corps Gen. Kenneth F. McKenzie, commander of U.S. Central Command as narrated by DoD’s Jim Garamone and watch the videos below.

McKenzie said planning for the raid began much earlier. He said Baghdadi was a priority target for Centcom, and as a result, was the subject of an intense effort to bring him to justice.

“As it became clear that we had gained clear and actionable intelligence on his hideout, we developed a plan designed to capture or kill him and started preparing a special operations team for the mission,” he said.

McKenzie said he briefed Defense Department leaders on the intelligence and the plan on Oct. 25. With the approval of Defense Secretary Dr. Mark T. Esper and Army Gen. Mark A. Milley, the chairman of the Joint Chiefs of Staff, he briefed President Donald J. Trump on all aspects of the plan, including the risks involved in its execution.

The special operations team was staged in Syria and launched against an isolated compound in Idlib province about 4 miles from the Turkish border. “We assess that he was hiding in Idlib province to avoid the intense pressure that had been put on ISIS in other areas of Syria,” the general said. 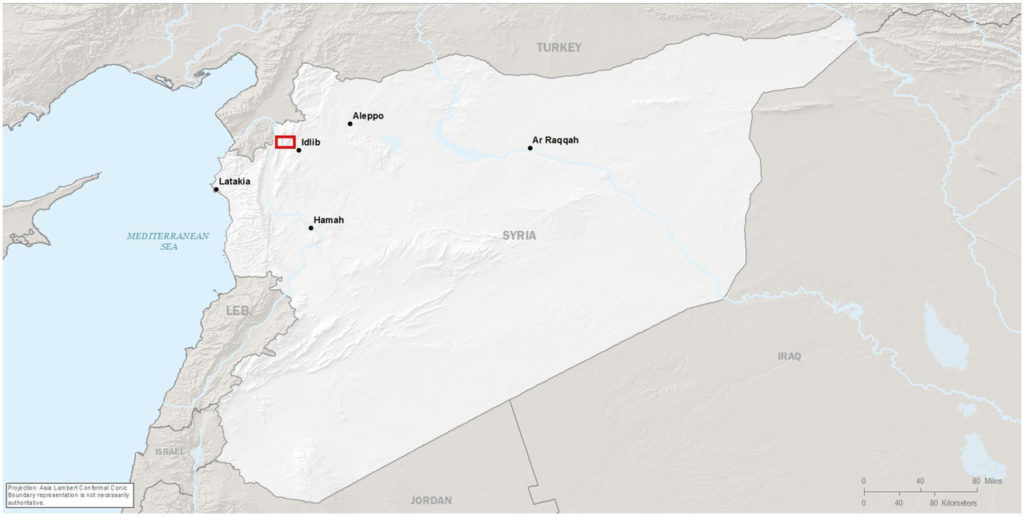 The team was inserted by helicopter and protected by attack choppers, unmanned strike aircraft and fourth- and fifth-generation fighters, McKenzie said. “I would also note that the plan accounted for the assumption that we would find multiple children at the objective,” he added.

The president approved the plan, and Centcom deconflicted operations in the area with Turkey and Russia, McKenzie said.

As the U.S. aircraft arrived at the compound, the choppers started receiving fire from fighters on the ground. McKenzie said he believes those groups were not ISIS members. Still, he said, they demonstrated hostile intent against U.S. forces and were killed by two airstrikes from supporting helicopters.

The assault force surrounded the compound and urged those inside to surrender peacefully. “Those who came out of the building were checked for weapons and explosives and moved away,” McKenzie said. “U.S. forces detained and later released the noncombatants. The group was treated humanely at all times, and included 11 children.”

Five ISIS members inside the compound presented a threat to the force, the general said. “They did not respond to commands in Arabic to surrender,” he added, “and they continued to threaten the force. They were engaged by the raid force and killed: four women and one man.”

U.S. forces located Baghdadi in a tunnel inside the compound. When capture was imminent, the terrorist detonated a bomb he was wearing, killing himself and two children.

“After Baghdadi’s murder/suicide, the assault force cleared debris from the tunnel and secured Baghdadi’s remains for DNA verification,” McKenzie said, adding that the remains were positively identified. The body was appropriately buried at sea, in accordance with the law of armed conflict, he said. 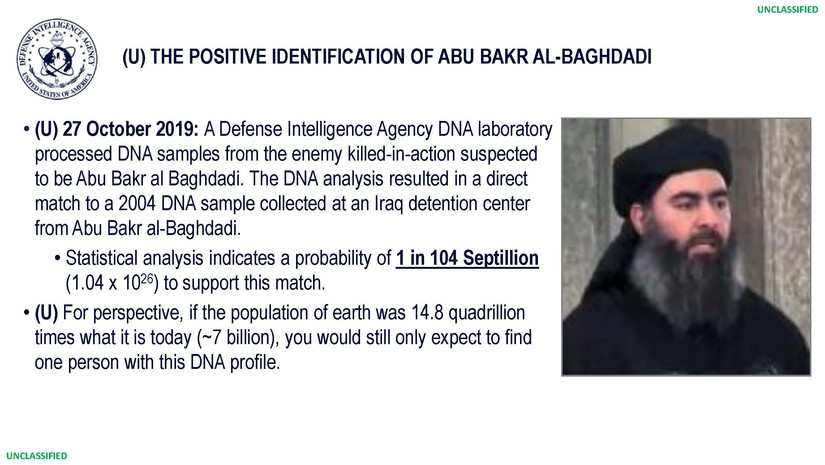 Defense Intelligence Agency DNA laboratory confirms positive identification of Abu Bakr Al-Baghdadi with a probability of 1 in 104 septillion based upon DNA collected during Baghdadi’s detention in 2004. 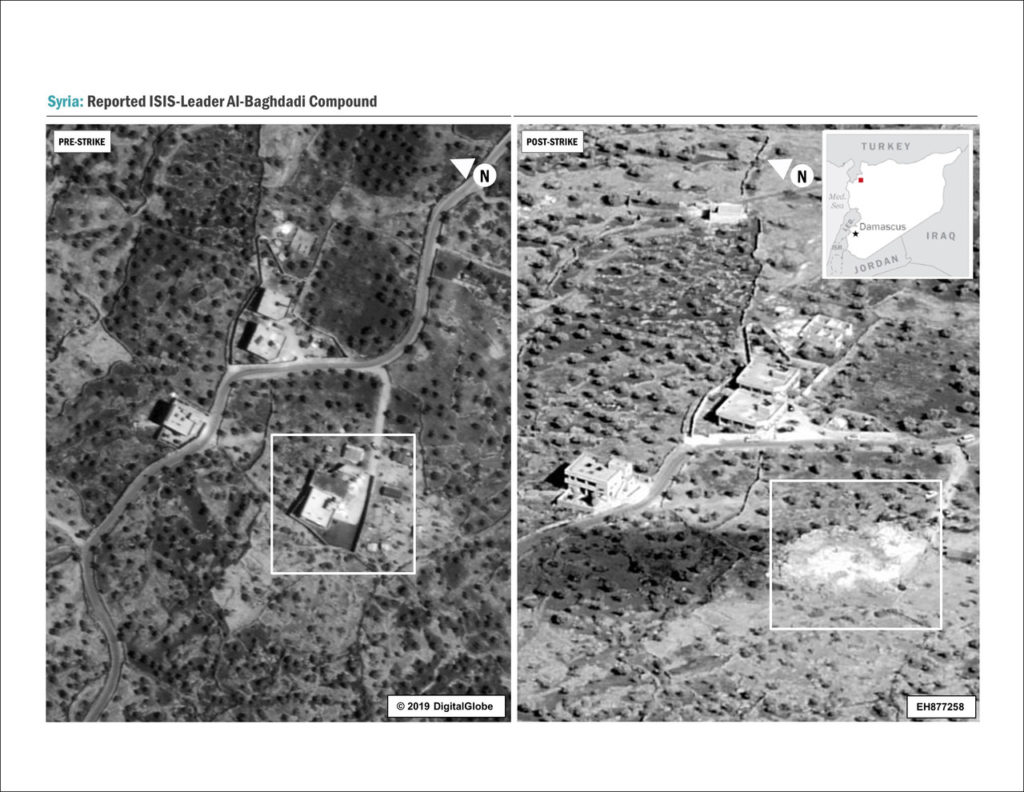 Aircraft destroyed the compound so it can’t be used as a shrine to the murderer, the general told reporters. “It looks like a parking lot with big potholes,” McKenzie said.