Posted on January 23, 2023
You are here: Home / Crime / TRUMP AND THE VERY BEST MIND LIKE YOU WOULDN’T BELIEVE 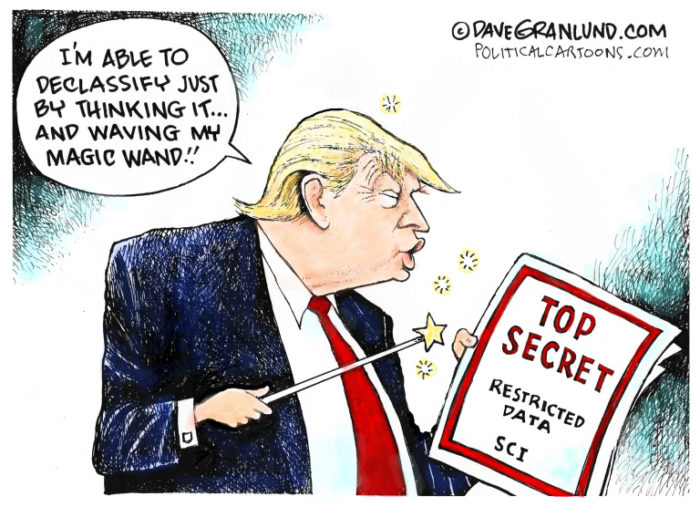 We’ve long been exposed to Don the Con’s superpowers, his ability to scam millions of presumably sane Americans and make them think his bullcrap doesn’t stink. But this week in an “exclusive” appearance on Faux News, he announced that we ain’t seen nothing yet.

Who knows, maybe his untapped superpowers are so potent that at some point he’ll simply launch himself airborne and land in a country with no extradition treaty. It may come to that.

Wednesday night, our desperate thief-in-chief was gutted like a fish on a slab by three federal appeals court judges (two of them, his own appointees), who ruled unanimously that the temporarily-halted FBI probe into his theft of national security documents can now resume with all deliberate speed. I need not bother explain what that halt was all about – it was just Trump trying to gum up the legal machinery, as usual.

Here’s the relevant gist: Trump claimed he’d declassified everything he stole, but the three appeals judges shrugged that off, the same way you’d flick a fly off your forearm.

But Trump still doesn’t grasp that bottom-line fact. He’s all hung up on the red herring. And that’s where his superpowers come into play. He explained it to lapdog Sean Hannity:

Even by thinking about it…Did Obi-Don Kenobi learn that Jedi mind trick from Yoda?

Or is he channeling Johnny Carson’s Carnac the Magnificent?

I have so many questions. If a lame duck president can declassify documents in his mind merely by thinking it, would it not also be true that Joe Biden, the current president, can reclassify those documents merely by using his mind to think it, which would mean that the ex-prexy got caught with classified documents?

If a president can merely tap his noggin to classify or declassify anything he fancies, without anyone knowing what’s going on his head, how do people with high security clearances know whether the documents to which they have access are classified or declassified?

Wait, I think I get it: He uses his mind to declassify the documents (thus lowering their value, because he thinks it might stave off an indictment), but when he’s ready to sell the documents to Saudi Arabia or Russia or God knows who, he uses his mind to reclassify them (thus raising their value to fetch a higher price). Which is basically what the New York attorney general’s office, in Wednesday’s historic lawsuit, says he’s been doing for years – inflating his assets, with illegal fakery, for ill-gotten financial gain.

OK, enough tongue in cheek. This is a very sick puppy who’s terrified that the walls are closing in, which is why his latest con is so telepathic. Maybe he was auditioning an insanity defense.

But if he did train with Yoda, it’s clear that he ignored one of the little dude’s sternest warnings: “Once you start down the dark path, forever it will dominate your destiny.”