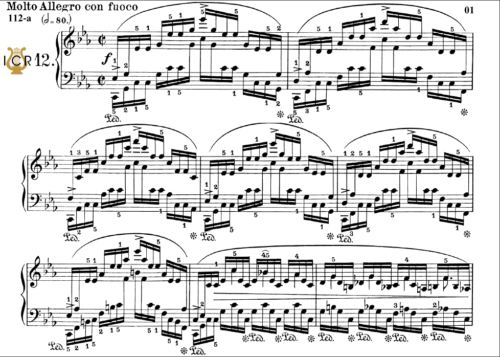 I once again return to the music of Chopin for this music article. In case anyone wonders whether I am biased when it comes to Chopin’s music, I plead guilty. Chopin wrote two major volumes of etudes, opus 10 and opus 25 which were primarily designed to improve a pianist’s technique. In order to maintain a pianist’s interest in these grueling pieces of music, Chopin tried to make them as melodic as possible. I think after watching Valentina Lisista play this piece, you will agree that to play it well, the pianist must be not only strong but very agile. When my students play Chopin Etudes or music like the 3rd movement of the Moonlight Sonata, I make them work out with 10 pound hand weights to build the muscle and stamina to complete the pieces. Even in my youth, this was extremely difficult to play well without running out of gas before the end. At 75, I no longer even try to play it.

This particular Etude, op 25 #12, was written in late 1838 while Chopin was vacationing on the island of Majorca trying to restore his ill health. Many of Chopin’s etudes have been given nicknames and op25 #12 was called the Ocean because of Chopin’s use of repetitive arpeggios using the entire keyboard to mimic the sound and action of the ocean waves he witnessed on the beaches of Majorica. If you recall when I featured Chopin’s Prelude in Db, nicknamed the Raindrop, for it’s use of repetitive A’s to mimic the sound of raindrops hitting the roof.

There is a portion of the music at around 1:53 where the overtones produced by so many notes takes on a musical life of it’s own. It almost sounds like violins in the background. As with most of Chopin’s music this piece was written in a minor key, actually C minor, which gives it that melancholy feel. Enjoy the sounds and if you ever have anyone play this piece for you then you will know you have met a true musician.