On a day when the nation “achieved” the grim milestone of 200,000 deaths due to the coronavirus, only four months after the toll hit 100,000, one is right to ask “What does this number really mean”?

But, first, as so many have so sincerely said (and one person who shall remain nameless, not so sincerely) “one is too many,” especially if that one is one’s parent, son or daughter, brother or sister – a loved one.

One is too many for Nicole Hutcherson, of Goodlettsville, Tennessee, who lost her father, Frank M. Carter, 82, to the virus in April.

For Rosie Davis, who lost her 75-year-old mother, Mary Castro, five days after Mary contracted the virus, one is certainly too many.

Imagine Shane Peoples’ unfathomable grief when she lost not one, but both her parents to COVID-19. Darlene and Johnny Peoples had been happily married for nearly half a century and died minutes apart while holding hands.

Contrary to Trump’s heartless and incorrect statement that Covid-19 “affects virtually nobody” under the age of 18, the American Academy of Pediatrics stated less than a week ago that 587,948 child COVID-19 cases have been reported.

“Virtually nobody” must be especially heartbreaking for the parents of 17-year-old Carsyn Leigh Davis in Florida and of a 2-month-old baby in Michigan. Both tragically succumbed to the virus.

When, only four months ago, our country approached 100,000 coronavirus deaths, The New York Times called it “an incalculable loss” and attempted to convey the enormity of the tragedy – and to personalize it — by dedicating the entire front page and three additional inside pages to list the names of 1,000 of the 100,000 victims, along with a short “tribute” depicting “the uniqueness of each life lost.” (Below) 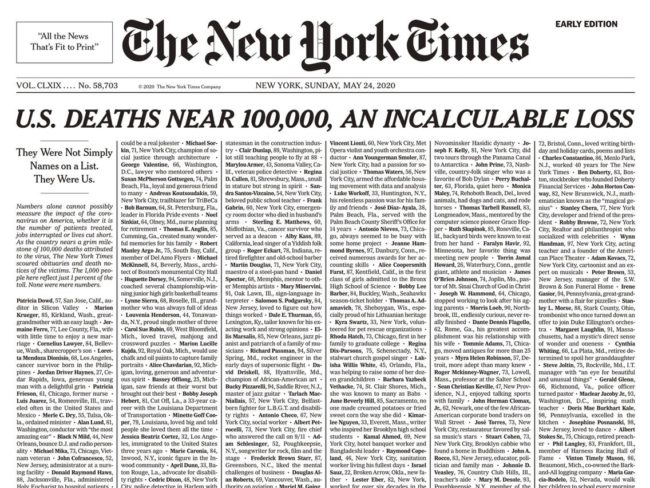 Today, how do we describe the loss of 200,000 human beings, how do we commemorate the grim milestone that “cements the US’s bleak status as the country with the highest recorded death rate in the world”?

TIME has done it with a cover illustration by artist John Mavroudis revealing the grim milestone of 200,000. (Lead image) The image is within a black border. It is “only the second time in our history we have done so, the first being after 9/11,” says TIME. Mavroudis adds, “I really hope this cover is a wake-up call for those who are numbed to this catastrophe.”

This is how others are trying to put this American tragedy into context, into perspective, hoping that Americans are not being numbed, inured to the idea that so many lives continue to be lost.

• The death toll is equivalent to the entire population of Salt Lake City, Utah, Akron, Ohio or Montgomery, Alabama.

• Six out of every 10,000 residents in the United States have died of the virus — one of the highest rates among developed nations. [Reuters]

• Already, Covid-19 has killed more people in the US than Americans killed in battle during the five most recent wars combined: the Korean War, the Vietnam War, the Iraq War, the War in Afghanistan and the Persian Gulf War.(CNN)

• Since the first known US Covid-19 death on February 6, an average of more than 858 people have died from the disease every day. That means that, on average, one U.S. death has occurred every 1.5 minutes since that date.

• Covid-19 is now the second-leading cause of death in the US, just after heart disease, according to the University of Washington’s Institute for Health Metrics and Evaluation [IHME].

• The loss of life is like suffering the effects of 109 Hurricane Katrinas or enduring the 9/11 attacks every day for 66 days.

• In less than a year, COVID-19 has killed four times as many Americans as died from the opioid crisis during its deadliest year.

The numbers and the circumstances make it difficult to properly and personally mourn and honor so many deaths.

The Washington National Cathedral marked the moment on Sunday by tolling its mourning bell 200 times, or once for every 1,000 deaths from Covid-19 in the United States. (Below)

Monday evening, during Anderson Cooper’s show, CNN scrolled the names of some of the people killed by the virus. To scroll the names of all 200,000 would take seven days of continuous broadcasting.

Dr. Dhruv Khullar at The New Yorker writes that , “according to one estimate, each person who dies of COVID-19 leaves behind an average of nine surviving family members.” “If this is right, he continues, “then there are now at least 1.8 million Americans mourning the loss of kin—parents, husbands, wives, children, siblings, grandparents—and millions more who are mourning with them.”

That might be one of the best explanations of what “that number means.”

Finally, it doesn’t have to be “It is what it is.” America is better than that.