Pigs really do fly. That is according to flight attendant Patricia Leung, who was interviewed by Yahoo Canada for a story titled Ask The Expert: Can your outfit get you a flight upgrade? Flight attendants reveal airline secrets.

When asked what are the weirdest items that people bring on a flight, Leung gave this response:

“Yeah, a miniature pig. So I guess our airline allows that, it’s part of our agreement. We allow miniature pigs, horses, like, miniature. So I was caught off guard one time, because I was checking to see if it’s a dog or a pig, because it was dark. And then once I see it, I was just– I was just like, wow, like, I’ve never seen a pig on a plane.”

Leung doesn’t say if the pig she saw was using a cell phone to do business with Geico.

“Not on my flights, I haven’t seen anything weird. But I’ve heard stories where people brought scorpions on the plane and they’d lost them, and then they thought they were gone. And then on the next flight, you see a [scorpion] walking by, or a snake.”

I wouldn’t be surprised to see a snake on a flight going to or from Washington, D.C., but I digress.

Cosmopolitan magazine has a story in which flight attendants share their own tales about craziness on flights. Here is one such tale:

“A grown man dressed as an elf walked onto the aircraft and showed us his boarding pass, like everything was normal. He was a tall man, probably in his 60s or 80s. He was pretty drunk. He wasn’t being offensive to anyone; we just weren’t going to serve him any more alcohol. We couldn’t ask him to leave the plane because he wasn’t doing anything wrong but the other passengers were kind of looking at us for reactions. I could barely look at him without laughing. He was just sitting in the end seat dressed as an elf, while everyone was dressed normally. It wasn’t even that close to Christmas. I think it was October.”

Perhaps Will Ferrell’s dad should lay of the sauce before flying anywhere.

The Man Repeller website features this comment from a flight attendant: “So, to anyone reading this, please remember one thing: Do not flush the toilet on an airplane while you’re still sitting on it.” Click here to learn why.

So, the next time that you fly anywhere, be nice to the flight attendants. They have to put up with pigs, snakes, elves and passengers stuck to toilets.

Oh, if one of the flight attendants happens to be Elaine Dickinson, then you might want to buy flight insurance from Geico before take-off. If you don’t know how, then ask a pig for instructions. 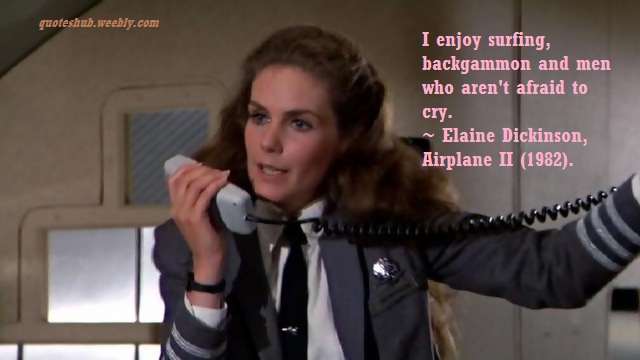 Reader’s Digest: The 15 Craziest Things Flight Attendants Have Seen on the Job