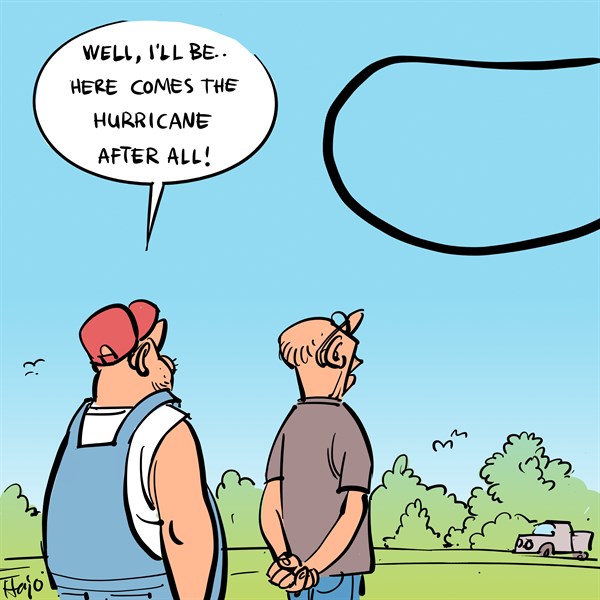 WASHINGTON — This doesn’t qualify as earth-shattering news at this point, but President Trump showed us again this week how spectacularly ignorant, vainglorious and obsessive he can be. This time, he did it with a clumsily doctored map.

Yes, I’m talking about the out-of-date National Hurricane Center map of Hurricane Dorian’s projected path that Trump displayed Wednesday — a map that someone who clearly knows nothing about weather forecasting or rudimentary logic had crudely altered with a black Sharpie (Trump’s preferred writing implement) in order to protect the president’s massive yet eggshell-fragile ego.

The heartbreaking story about Dorian is the catastrophic damage the storm inflicted on the northernmost islands of the Bahamas, where entire communities were destroyed and there still is no accounting of how many lives were lost. The ongoing story is the threat of flooding in the Carolinas as the storm plows its way northward. The contextual story is the growing scientific consensus that climate change has made such tropical storms fiercer, wetter, slower-moving and thus more punishing than in the past.

But leave it to Trump to make himself the subject of a bizarre and disgraceful footnote. I pity the satirists and comedians who try to make fun of him, because he does such a good job of it himself.

To review: On Sunday, Trump tweeted a warning to residents of states that could be “hit (much) harder than anticipated” by Dorian — Florida, South Carolina, North Carolina, Georgia “and Alabama.” An admirable gesture, but the National Hurricane Center was predicting that the storm would parallel the southeastern coast, remaining over the Atlantic Ocean — far from Alabama. Indeed, that same day, Trump retweeted an up-to-date hurricane center map showing the projected offshore path. National Weather Service officials in Alabama quickly issued a tweet making clear that residents of that state were in no danger.

When reporters pointed out the discrepancy, Trump went ballistic.

On Monday evening, the president tweeted that it “WAS true … under certain original scenarios” that Alabama could have been hit. It is the case that in the middle of last week, when Dorian was still over the Caribbean Sea hundreds of miles from the Bahamas, some forecasting models predicted it might plow across the Florida peninsula and possibly enter the Gulf of Mexico, where it possibly could affect Alabama. But by Sunday, according to forecasters, it was clear this would not happen.

OK, fine, end of story. Trump made a mistake. We all make mistakes. Except that we have a president who seems incapable of admitting even the slightest error, especially if he is called on it by the journalists he slanders as “enemies of the people.”

So on Wednesday, in delivering an update on the hurricane, Trump displayed a week-old hurricane center map showing how forecasters initially though the storm might make a Florida landfall and head northwest. The widening “cone of uncertainty” — showing where it was believed, a week ago, that the hurricane might conceivably go — was outlined in white. The cone did not, however, quite reach the great state of Alabama. But someone had used a black Sharpie to add a little bump indicating that Alabama had been imperiled.

As smooth moves go, it was lamer than trying to forge a $100 bill by taking a Monopoly $1 bill and writing a couple of extra zeroes on it.

Leave aside that it was an outdated forecast. As I don’t have to tell you — but, sadly, have to explain to the president — the cone of uncertainty on a hurricane map always widens and never narrows. That’s because it’s easier to forecast where a storm will be later today than where it will be tomorrow, easier to forecast its position tomorrow than the day after, and so on.

We’re left with two disturbing possibilities. One is that Trump altered the map himself. In that case we have a president too insecure to admit the slightest misstep and too incapable of logical thinking to do a plausible job of forgery. We also have a president who broke the law, since altering a National Weather Service forecast is a crime.

The other possibility is that someone on Trump’s staff used a Sharpie to fulfill the mission of “proving” Trump right even when he’s wrong. That’s basically all the White House communications shop does these days, anyway.

I know it’s a minor episode, but I hope that doctored map makes its way into the Smithsonian someday. Like Washington’s uniform or Jefferson’s desk, Trump’s bogus map embodies the man.