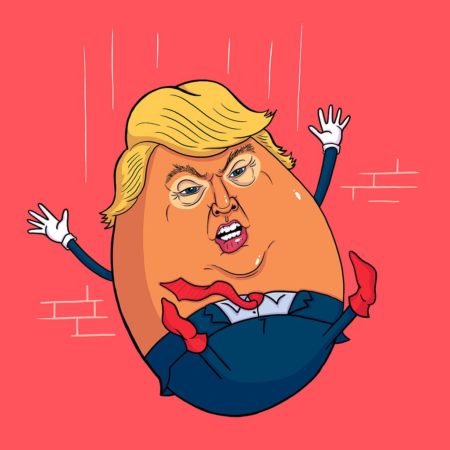 WASHINGTON — Uh-oh. President Trump is in such a state of panic about his dimming reelection prospects that he’s getting his lies mixed up and occasionally blurting out the truth.

“It’s tough for Apple to pay tariffs if it’s competing with a very good company [Samsung] that’s not,” the president told reporters Sunday — flatly contradicting the ridiculous and utterly false narrative he has spent months trying to sell. Trump apparently forgot his standard lie that China is somehow paying “billions of dollars” in tariffs, acknowledging instead that they are taxes paid by U.S. companies and, ultimately, the American consumer.

This reflects more than just the difficulty of juggling multiple lies. Evidence suggests that Trump is melting down. Again.

And for good reason.

Fears of global recession, greatly exacerbated by Trump’s erratic and self-destructive trade policies, have sent financial markets tumbling. A sharp downturn would close off one of the principal lines of attack the president was hoping to use against his Democratic opponent. He tried it out at a rally in New Hampshire last week: “You have no choice but to vote for me,” he told the crowd, because “your 401(k)’s down the tubes, everything’s gonna be down the tubes” if he loses. “So, whether you love me or hate me, you gotta vote for me.”

Trump is flailing. He berates his handpicked chairman of the Federal Reserve, Jerome Powell, for not cutting interest rates fast enough to goose the economy. He practically begs Chinese President Xi Jinping for a meeting to work out a trade deal — any trade deal, apparently — and is met with silence. He threatens more tariffs but then backs down, at least for now. According to published reports, he sees himself as the victim of a conspiracy to exaggerate the growing economic anxiety in order to hurt his chances of winning a second term.

He entertains grandiose, almost Napoleonic fantasies — purchasing Greenland from Denmark in what he calls “a large real estate deal,” perhaps, or imposing a naval blockade to force regime change in Venezuela. He apparently spent much of the weekend fuming about not getting credit for how his New Hampshire rally broke an attendance record for the arena that had been set by Elton John.

And Trump can’t seem to stop railing against a recent Fox News poll that showed him losing to four of the leading Democratic contenders. The president seems to consider Fox his administration’s Ministry of Propaganda — indeed, that is the role the network’s morning-show hosts and prime-time anchors loyally play — but the polling unit is a professional operation. “There’s something going on at Fox, I’ll tell you right now, and I’m not happy with it,” Trump told reporters Sunday. He added a threat, saying that Fox “is making a big mistake” because he is “the one that calls the shots” on next year’s general election debates — the implication being that Fox might not get to broadcast one of them if it doesn’t toe the party line.

For the record, Trump’s claim about his political standing is that it couldn’t be better — but could be better.

“Great cohesion inside the Republican Party, the best I have ever seen,” he tweeted Monday. “Despite all of the Fake News, my Poll Numbers are great. New internal polls show them to be the strongest we’ve had so far! Think what they’d be if I got fair media coverage!”

An hour later, he was back on Twitter to attack Anthony Scaramucci, who famously spent 11 days as White House communications director and recently became the latest Trump supporter to hit the “eject” button. Predictably, Trump called him a “nut job,” claimed to barely know him, and dusted off the ultimate insult, calling him “bad on TV.”

The astonishing thing is that the president of the United States is, let’s face it, raving like a lunatic — and everyone just shrugs.

The nation is still reeling from two mass shootings. The financial markets are yo-yoing by hundreds of points. A bomb in Afghanistan, where we’re still at war, killed 63 revelers at a wedding. Tension between the United States and Iran continues to mount. North Korea keeps testing new missiles. India is playing with fire in Kashmir. Hong Kong has been convulsed for months by massive protests seeking to guarantee basic freedoms.

And Trump obsesses about buying Greenland.

The truth is that we don’t have an actual presidency right now. We have a tiresome reality show whose ratings have begun to slide — and whose fading star sees cancellation on the way.